This Is As Deep As Jared and Peter Ever Get...

Deep Throat is the first Franklin & Bash episode I've seen all season where I haven't wanted to throw the remote at the screen.  It's still not as good as Season One stories, and the central case made me almost root against the client, but at least there was a semblance of character development and little intrusion from the idiocy that usually rules F&B, so that's a plus.

The main case involves Josh Taylor (Devon Werkheiser), a high school student who is being accused of libel because in his school paper, he published an article stating that the Prom Queen election was rigged for a certain student, and that there was vote-tampering involved.  Josh happens to be the son of Molly Taylor (Courtney Henggeler), an old flame of Peter Bash (Mark-Paul Gosselaar).  He was so inept in high school that at their Prom, their first dance was also their last, as he came (in white pants, no less) when they were dancing cheek to cheek.  This tidbit delights his 'partner', Jared Franklin (Breckin Meyer), who doesn't waste an opportunity to mock his best friend.

In any case, Molly and her bastard child face great difficulties.  Josh is expelled, and his journalism scholarship is withdrawn due to the brewing scandal that perhaps HE was the one who tampered with the ballot in order to get a scoop.  He's gone from Woodward and Bernstein to Stephen Glass, but is there a way to get to the truth and save Josh's reputation?  A little help from their investigator Danny Mundy (Anthony Ordonez) and some anonymous tips yield convenient clues, and some shady business by Principal Edgar (Kevin Rock).

There's also some personal personnel business, as Jared and Ellen Swatello (Rhea Seehorn), his 'friends with benefits', have to answer questions as to the full state of their relationship.  At the H.R. meeting, we find that Swatello sees their relationship as 'somewhat serious', one where the possibility of formalizing it is open, while Franklin admits he sees it as 'casual', and even went so far as to write a three-paragraph essay about how marriage is dead.  What exactly IS the state of their relationship?  We'll find out, but not this week. 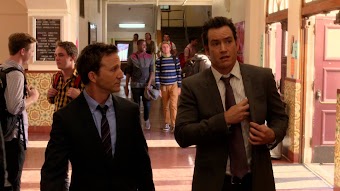 On the whole, what made Deep Throat a much better Franklin & Bash episode, one that has come close to capturing how it was before it became too self-indulgent and cock-sure (in more ways than one) is that it wasn't afraid of human emotion.  In many episodes, Peter's longing for love (be it his ex ADA Janie Cross, his ex Officer Cowell, or his ex Molly Taylor) has been touched on, as if he yearns for love and stability but is terrified of losing his fratboy lifestyle.  The pull between his heart and his head (not his brain, mind you, but his head) has made Gosselaar's character who at times seems downright human.

This time, however, it is Jared who has to come to some understanding that he can't be a child forever.  He too is terrified of commitment, and he simply can't bring himself to contemplate leaving his bestie.  Granted, Jared's always had an undercurrent of repressed homosexual longing for Peter (emotional and/or physical), but this time we get the sense that maybe Jared might actually be human as well.  It does stretch the imagination that Swatello, who in the beginning said to them that they "drive a clown car of immaturity" would seriously contemplate a long-term relationship, even marriage, for someone like Jared who never wants to do anything sensible.  For all we know, Swatello may be the one who just prefers the sex and nothing more.

However, at least Ellen Swatello knows that eventually the bump-and-grind have to go somewhere beyond the mere physical satisfaction they get, and knows that perhaps Jared is not the one who can be a full partner.  She may even know what the Math Club President Connie (Dyana Liu) told Jared and Peter when they were interviewing her about their case.  "You make a cute couple," she innocently tells them when they try to hoodwink her with their 'domestic partners' routine.

I was highly impressed with Werkheiser's performance as Josh.  Granted, his single-minded and high opinion of his role as 'truth teller to the world' got on my nerves, but at least he was highly convincing as someone who has one goal in life (be the new face of Journalism) and pursues it with a passion.  He isn't the smartest reporter (publishing an article on his blog with the headline Principal Edgar Rigs Election with just anonymous sources to verify this and not tell his lawyers was not a bright move) and let's face it: someone throwing a Prom Queen election the way it was done and by someone in particular also seems a bit too much to believe.  However, one isn't going to belabor the point.  Hopefully, Werkheiser will get more recognition in the future.

We still have terrible issues in regards to how Franklin and Bash behave.  I agree with Principal Edgar when he tells them, "I'd expect my sophomores to be able to NOT laugh at the mention of a gag order," though they can't help themselves.  Seriously, guys, how long have you been practicing law?  At the end of the episode, we find that Jared had never heard of All the President's Men or what 'Deep Throat' meant beyond the Linda Lovelace epic.   Again, we have to rely on the old 'Jared Franklin and Peter Bash are really stupid and ignorant about a lot of things' to bring the 'comedy'.

However, on the whole Deep Throat is perhaps the best episode of Franklin & Bash that has come around all season.   Maybe with five episodes left before we wrap up the season, Kevin Falls and Bill Chais finally woke up and realized that fans were getting garbage and decided it was time to rescue the show from sheer stupidity.

Then again, Jared and Peter have a nasty habit of being a bit like how former Israeli Ambassador and Foreign Minister Abba Eban described the Palestinians:

Next Episode: Dance the Night Away
Posted by Rick at 5:31 AM