What do these two films have in common besides a bearded fat man? They also are considered the best examples of certain films: on the left (Citizen Kane) as the greatest film ever made, and on the right (Santa Claus Conquers the Martians) as the worst. 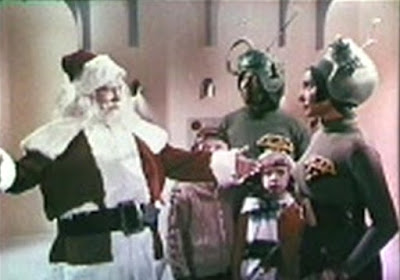 I thought long and hard about my grading system. I decided that I have been unsatisfied with my rankings: Voted Up or Voted Down. I think I should be a little more expansive with how I rank films. I've been playing with a new system that I hope will be a more accurate manner of showing how good or bad a film is.

The Best of the Best, films that I thought achieved their goals whatever they may have been. If it was a drama, to move me. If it was a comedy, to make me laugh. If a film met its goal, if it has to my mind some extraordinary performance, or visuals, or story that elevate it, it may get the highest points from me.

A Good Film, enjoyable that somehow didn't quite make the mark to be ranked as among the greatest of all time. However, I enjoyed them and think they should be seen and would recommend them.

A film that gets a barely passing grade from me. This is the type of film that I would recommend you could rent and still think decent enough.

A film that I did not think was good and would not recommend you go and see but that might be worth renting if there is nothing to see.

The difference between a C+ film and a C- film is that a C+ film, while still not great, is not to my mind horrible. A C- film on the other hand, tried for something and did not quite work well enough to pass muster. You could see a C- film and maybe enjoy it, but I would tell you it is not a good movie.

These are films I would tell you are bad or at least not very good. You could survive watching them but I would tell you to skip this film if you had the option. For the most part, they aren't good films. Some are all right, but I wasn't overwhelmed with them. Your life will not be improved if you go through it without having seen them. However, if someone offers to lent it to you or asks if you want to watch it with them, go ahead.

These are TERRIBLE. They are LOUSY. They are BORING. They are crimes against cinema. These are barbaric pieces of trash. No one should watch them. In fact, people should find every copy and burn them and not onto a DVD. Just don't bother with them.

On rare occasions, I will have an "F-" film. These are films so awful, so unbearable that I genuinely hated, despised and detested them. I will probably keep a burning fury against them for time and eternity.

I do not have a system where every film must meet some 'greatest film made' criterion. A children's movie that I found cute and that I think would appeal to its target audience may get


A, B, and C+ are good to OK, C- is not horrible but not worth the time. D is not good enough. F. is self-explanatory. The cut-off point between a good film and a bad film is C: a C+ is still good, while anything C- or lower has in my view failed. I hope this system will work better.

Email ThisBlogThis!Share to TwitterShare to FacebookShare to Pinterest
Labels: Rankings