On To The Second Star To The Right: Peter Pan Retrospective Introduction

I decided to do a brief retrospective on Peter Pan in cinema.  I can't find a particular reason: the play premiered 108 years ago, the book version 101 years ago.  As far as I know there isn't a new version of Peter Pan coming out save for the Neverland miniseries from last year.  So, why do this retrospective?

I think it has to do with the fact that I've become fascinated by how much one work by one man has so entered the popular imagination.  The characters are now so iconic: the boy who wouldn't grow up, the Lost Boys, the villainous Captain Hook, even the world of Neverland/Never-Never Land itself are part of our lexicon.  The story and characters are such a large part of youth that one thinks they've been around forever.

I think it's amazing that Sir James M. Barrie's story is now virtually part of our everyday world.  Few authors have that power to have their creations become part of everyone's childhood: Lewis Carroll does, perhaps Beatrix Potter, but while Barrie wrote much, what else besides Pan is remembered?  It is a credit to his remarkable talent that his creations are now part of every childhood, perhaps as he intended.

It's just a curiosity thing for me to explore the cinematic versions of the Peter Pan story.  With that, I decided to do a brief retrospective on all the sanctioned Peter Pan films.

Our first film version of Peter Pan is the 1924 silent version.  As with most silent films, it is remarkable that we have it at all, given how quickly silent films were disposed of or just disintegrated.

One shouldn't give too much thought to the fact that Peter is almost always played by a female. This is a tradition that started with the original theater production and continues: the musical version of Peter Pan is so identified with Mary Martin that any woman is automatically measured against her.  All subsequent stagings of the musical will always have a female as Peter.   Thus, it made sense to cast a woman as 'the boy who never grew up', and in this first film version it was Betty Bronson.

Somehow, I think the idea of Chinese film star Anna May Wong as Native American Princess Tiger Lilly is more shocking than a woman playing a man.  However, Bronson as Peter is something that even now would appear perfectly natural if we consider the theatrical traditions. 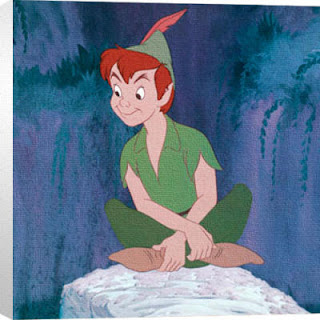 On a strictly technical level, the 1953 animated Peter Pan is the first to have a male play the part, albeit in voice.

It's only been twenty-nine years since the silent Peter Pan, but now J. M. Barrie's story gets the Disney treatment.  The animated Peter Pan story had Bobby Driscoll voicing Peter, and I think that makes perfect sense: a person can distinguish between a woman's and a man's voice when that is the only thing they have.

Curiously, whenever I see this version, I always think of both Peter and Wendy as being teens, which again makes sense: Driscoll was seventeen when he voiced Peter and Kathryn Beaumont was fourteen.  However, I always thought the animated versions looked a bit older than children, but now I digress.

We have our issue with the Indians in the 1953 version, which I will cover later.  For now, I will say that Disney to my mind is hypocritical in keeping Song of the South out of American circulation due to the perception of racism while having no difficulty having Peter Pan available.  Yet again, for another time.

Now, in 2003, a mere fifty years after the animated Peter Pan, another breakthrough.  In the entire history of Peter Pan stage or screen, this is the first time that Peter was played on-screen by an actual male.  Jeremy Sumpter thus makes history with his interpretation.  While he was 13 when he started, he actually looks a bit younger, thus making the idea that he is a boy forever more believable.

What I find amusing is that while Peter Pan never grew up, Sumpter certainly did.  During production, he grew several inches, to where the sets had to be rebuilt to accomodate his growth spurt.

In addition to the santioned versions of Peter Pan, for good measure, I decided to throw in a couple of Peter Pan-related features.  The first is what one could call a sequel to Peter Pan: Steven Spielberg's Hook.  Robin Williams as Peter Pan appears to be great casting, but at the moment I can't say whether it is a good film or not.  Still, it is a curious thing to see how the idea of the boy who never grew up actually did grow up a most fascinating one.

This is the second Peter Pan-related film, this time focusing on its creation and creator.  Finding Neverland is the story of James M. Barrie himself, and while not strictly Peter Pan, this story is as close as we will get to a 'making-of' to Barrie and his immortal work.

In short, I will look over all three versions of Peter Pan (silent, animated, and live-action) as well as two stragglers: the 'sequel' and the 'prequel' if you will.  Perhaps I will go for a ranking, but I think that what I will end up with is just a simple overview to the films.  This retrospective, which at five I think will be the shortest thus far, is simply for mere pleasure of the story.

I think that my Peter Pan retrospective will be an awfully big adventure.