A Silence Falls Throughout Neverland...

There has been a long tradition of casting a female in the lead of Peter Pan.  As such, it's no surprise that the first filmed version of Peter Pan adopts this and other theatrical traditions of the J.M. Barrie story. The 1924 version of Sir James' story is probably as close to what we would have seen when it first appeared on stage, but this is not a flaw.  Rather, Peter Pan is a delightful film that children will thoroughly enjoy for the fantasy aspects and adults will appreciate for the innovative use of special effects.

The story of Peter Pan is one that has become part of the culture in general, but a quick recap.  The Darling family consists of a father (Cyril Chadwick), a mother (Esther Ralston), and their three children: sons John (Jack Murphy), Michael (Phillipe DeLacey), and daughter Wendy (Mary Brian).  They are watched over by their dog Nana (George Ali).

Into the Darling house flies the shadow of the boy who wouldn't grow up: Peter Pan (Betty Bronson).  Peter himself soon enters the house, and Wendy sews his shadow to him.  Now Peter invites Wendy to travel with him to Neverland to be mother to his group, the Lost Boys.  She goes, as do John and Michael, much to the dislike of fairy Tinker Bell (the appropriately-named Virginia Browne Faire).

Once in Neverland, we meet those who live there: the Lost Boys, the Indians, and the pirates.  While Indian maiden Princess Tiger Lily (Anna May Wong) has a slight crush on Peter, neither she or Wendy get his attention.

His mind is on the evil Captain Hook (Ernest Torrence).  Captain Hook is determined to get his hand on Peter, and soon he overruns the Indians and takes the Lost Boys and the Darlings hostage.  Tinker Bell comes close to dying after taking poison meant for Peter, but thanks to the pleas of Peter directly to us, she comes to life.  Now Peter and Captain Hook meet for the last time.  Peter is victorious, and while he isn't happy with it, Peter lets the Darlings go back to their London home.  However, Peter and Mrs. Darling come to an agreement: Wendy can return to Neverland once a year. 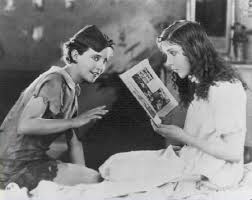 What makes Peter Pan so delightful is that it is made with children strictly in mind.  Director Herbert Brenon creates a world that is thoroughly fantastical, whimsical, one where the imagination of children would be what is real.

There are simply beautiful shots in Peter Pan that make one forget that this is a silent film which let us rely on the visuals: the flight from London to Neverland is beautiful, as is when Peter builds a little cabin for Wendy and the shots on Captain Hook's ship.

A great deal of the credit goes to cinematographer James Wong Howe, among others is one of the great cinematographers in film history. Howe's use of the camera in Peter Pan, in particular in the Neverland scenes, is sharp with beautiful touches such as when Peter 'tests' his shadow.  While we can if we look closely, see the strings that pull our cast to flight, we soon get so wrapped into the story that we either really don't see or care.

The performances are a sheer delight from beginning to end.  We have to start with Ali's Nana: while having a dog as a nanny is unbelievable, we soon forget that it is a man in a dog suit.  It helps that the dog suit itself is large enough to make Nana appear to be merely a large dog rather than a man inside, but credit should be given to Ali for making the dog movement realistic.

We also soon forget that technically, 'Peter Pan' is really a female.  Bronson has a sweetness in her face that shows the eager youthfulness and braggadocio to Peter.  Admittedly, Bronson is quite balletic in her interpretation to Peter, where her body movements are very graceful.  When Peter pleads with us the audience to help bring Tinker Bell back to life, Bronson's face is so expressive in her hope for Tinker Bell mixed with fear that she will die that one can easily imagine small children getting wrapped up in the film and saving our fairy from death.

The Darling children are quite good on screen.  Since Wendy is the primary character, Mary Brian communicates both the innocence of childhood and the growing romantic feelings for Peter.  Faire's Tinker Bell doesn't have much screen time but when she is there, the diminutive fairy is mixed so well into the film that one easily accepts the 'reality' of it all.

The best performance is Torrence's Captain Hook, which curiously, breaks with tradition of having Mr. Darling and Captain Hook played by the same actor.  Torrence keeps the balance between the comic foil to Peter and the dangerous, menacing pirate who won't shrink from killing the children.

There is an inventiveness in Peter Pan, a sweetness that goes so well with the source material.  Philip C. Carli's new score is sweet and loving and captures the innocence of Peter Pan.  The fact that this version is a silent film doesn't hamper the innocence and delight of the film.

Actually, it enhances it because we don't become distracted.  It is good that this film is no longer lost, but that it survived to delight future generations.

Silence is not a hindrance in Peter Pan.  Instead, the film inspires us to think wonderful thoughts...which is what one has after watching Peter Pan.