Before I had gone to see The Darkest Hour at a second-run theater, it had already earned a reputation as one of the worst films of 2011. Given it was released on Christmas Day, that makes it a remarkable feat indeed.  I went in with lowered expectations, and as I neared the end of The Darkest Hour, I had come close to concluding that it was mindless, a waste of time, but not a total disaster.

However, when we got to the actual end of the movie, it committed an unpardonable sin that sunk an already bad movie into a point of no return.

Sean and Ben (Emile Hirsh and Max Minghella respectively) are in Moscow to close a lucrative Internet deal.  They find they've been scammed by Scandinavian or Russian businessman Skylar (Joel Kimmerman) (the film never quite establishes what his nationality is), who takes the deal as his own.

Sean and Ben are upset and disappointed, but not enough to not go to a hip Moscow club, where irony of ironies, Skylar is also at, as are the two beauties Natalie and Anne (Olivia Thirlby and Rachel Taylor).  Sean and Natalie hit it off, while Ben and Anne are apparently there just for support.  Moscow is hit with strange lights falling from the sky.  In very short order (if anything, The Darkest Hour doesn't waste time on much), those lights vaporize any person they come across. 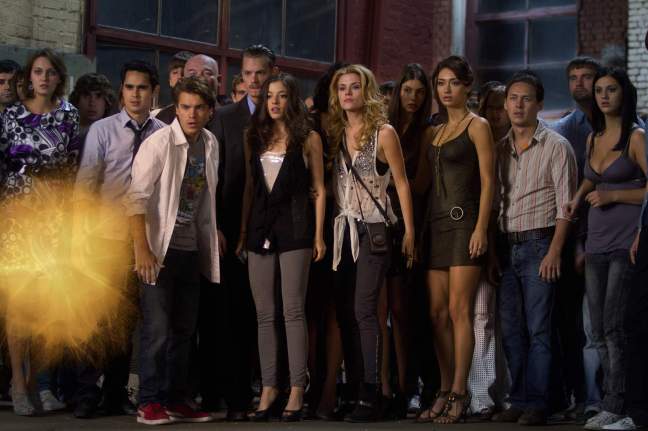 Somehow, our five youngsters manage to survive the initial attack, and after spending three days in a cellar, they emerge into a ruined Moscow.  Ben is determined to go back to the safety of the American Embassy.  The best time to travel is at night or the darkest hour, because electricity gives their presence away.

Our kids find a message, and then come across Vika (Veronica Ozerova), a touch chick who has managed to survive the invasion.  Our four people come to where Vika is staying: an apartment that has survived the onslaught due to the genius of Mr. Sergei (Dato Bakhtadze).

Now it's a race to get to a Russian submarine which is protected from attacks, I think because it is nuclear, before it sails away.  We get the unnecessary characters killed off in the style of any disaster film, throw in some Russian resistance fighters, a complication or two, a fight with the aliens, and the survivors sailing away to fight another day.

It is here when we get the sense that The Darkest Hour commits an unpardonable sin.  Longtime readers know I have a Golden Rule of Filmmaking: Never End Your Movie By Suggesting There Will Be A Sequel.  Guess what happens at the end of The Darkest Hour?

If it hadn't been for that, The Darkest Hour would have remained a silly, brainless but harmless endeavour.  Hirsh, judging from this film, is one of those actors who is only as good as the material he's in.  This is the same guy who was brilliant as Cleve Jones in Milk, but here, Hirsh doesn't appear to believe the second-rate dialogue by Jon Spaihts (with story by Leslie Bohem, A.T. Ahern, and Spaihts).  Neither does Mighella, who appears at times almost bored to have to be here.  Given that both are touted as actors on the make, being part of The Darkest Hour simply cannot help their reputations.

Side note: while watching The Darkest Hour, I could not help but marvel as to how short Hirsh appears to be.  IMDB has him listed as 5'7", and while Minghella at 5'10" is no giant, it still looks odd to see someone appear so small.

With all the actors of all nationalities (American, British, Australian, and Russian), one always got the sense they did the best they could without breaking out into giggles.  While Hirsh thought he could compensate by being broad with the 'wacky best friend' bit, Minghella decided to sleepwalk in the hopes people would forget he was in this and instead remember him from The Social Network.

The girls were practically indistinguishable except that one was whining and crying a lot, so we know who will live to see the end of the movie.

The Darkest Hour doesn't attempt to give us anything but the slimmest character traits to any of the people were are being asked to care about, so when they start getting vaporized, we can't actually feel any emotional impact on losing them. Director Chris Gorak had already a big problem drawing any performances from his leads, but he also had a nearly impossible task of making invisible aliens a threat.

Somehow, the idea of invisible aliens seems good: facing off against an enemy one cannot see could have been a point of making the only thing to fear be fear itself, but somehow distant memories of The Happening came to mind.  Just as it is nearly impossible to be afraid of the wind or the leaves, how does one fear flashing lights?

It all looked like they were doing everything possible to save money on this clunker.  To save on special effects, make the aliens invisible.  To save more money, give a great deal of shots over to the aliens point-of-view.  To save on location, film it in Russia.  To save on lights, film a lot of The Darkest Hour in the dark.  Now, while that would make some sense, it has the unfortunate result of making everything appear vaguely gray throughout the film.

Another cost-cutting measure: have the screen fade to black on numerous occasions.   You can't imagine how old that trick quickly got.

The Darkest Hour decided that it would be the perfect anti-Christmas feature: a movie to get away from what the holidays represent either in the spiritual or secular manner.  In many ways, it is just a sorry excuse for some bad acting, bad writing, bad directing, bad effects, and worse, a bad sense of hubris thinking that people will be demanding more of The Darkest Hour.   I even understand that this film was released in 3-D.  Now if that ends up being the nadir of this idiotic craze, perhaps some good came from The Darkest Hour.

Again, if it weren't for that vague suggestion of a sequel, The Darkest Hour would have been worth a hour and a half's mindless, dull, brainless distraction.  One, however, thinks that this film will end up being as invisible on everyone's résumés as the aliens themselves.