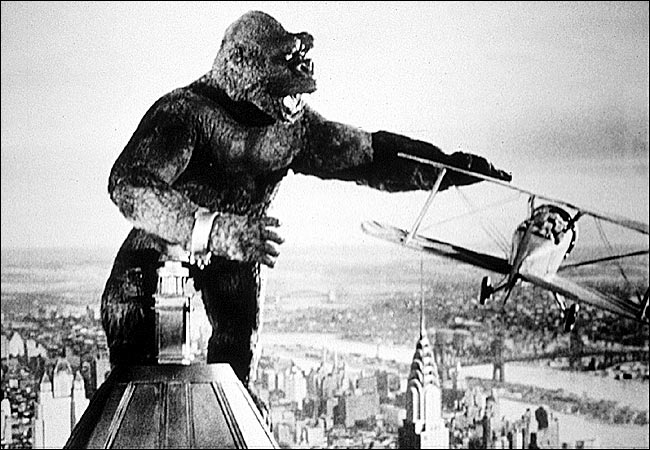 Above All Other Primates...

There are certain films that despite the silliness of the premise, not only hold up but take on an amazingly real presence.  If one were told the plot of King Kong is "a giant, and I mean, GIANT, gorilla becomes fixated on a beautiful girl", it's understandable people might laugh.  King Kong overcomes that by a combination of brilliant filmmaking, groundbreaking special effects, and strong pacing that always keeps your attention and never lets go.

Film producer Carl Denham (Robert Armstrong) is known for his at-times reckless filmmaking style, not shrinking from manning the camera despite whatever danger there is.  Now he's on a time-crunch: determined to get to an unknown destination to shoot his next film before the ship is held from sailing due to explosives on board.  However, despite his reputation, he can't find a leading lady.  With time pressing him, he goes into New York City, determined to find a girl, any girl.  Fortunately for him, he comes across Ann Darrow (Fay Wray), a former film extra down on her luck.  Eager for adventure, she agrees to go with his crew.

The ship sails into uncharted waters, much to the misgiving of Captain Engelhorn (Frank Reicher) and First Mate John Driscoll (Bruce Cabot).  The sweet and somewhat naive Ann is thrilled to be in pictures, and Carl coaches her in film acting, while Ann and Jack quickly fall in love.  Now they arrive at their destination: a mysterious island where Denham has heard of a mythical creature called Kong.  He believes the legend and setting will make a great setting for an adventure film.

He got more than he bargained for.  On the island, the natives celebrate Kong with presenting the creature a beautiful woman.  Once they see Ann, they abduct her to present her to Kong.  While there's a rescue party for Ann, it is too late: Kong has taken her.

Kong is a gigantic ape, who takes Ann to his lair, the rescue party in furious pursuit.  Kong appears fascinated by Ann: he doesn't kill her, merely admiring her beauty.  However, Kong is a powerful being, killing any creature, dinosaur or man, who dares get in his way.  Despite this, Jack manages to rescue Ann and while Kong goes after them, the bombs Denham has knock Kong out.

Denham, always eager for a big hit, takes Kong to New York, where he presents him as King Kong: The Eighth Wonder of the World.  Despite all the precautions taken, the photographers antagonizes Kong so much that he breaks free and continues his mad search for Ann.  He rampages through Manhattan, finds her, and takes her to the top of the Empire State Building.  Eventually, Kong's fascination with Ann brings him down in more ways than one. 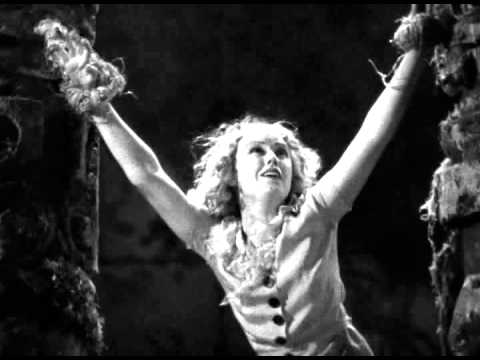 Again, on the surface the entire plot of King Kong appears downright bonkers.  However, enormous credit goes the cast and crew, who brought a real power and pacing to King Kong to where one doesn't get caught up in the strangeness of the plot but rather with the thrill and excitement of the adventure.

Main credit goes to Merian C. Cooper, who co-directed King Kong with Ernest B. Schoedsack, and with Edgar Wallace conceived the story.  He tapped into what are now-standard plot points: a damsel in distress, the jungle setting, a romance between two characters who 'don't like' each other in the beginning, and built on them to keep the pace steady, going from the mystery of where the crew was going to the rescue of Ann to the escape of Kong through his rampage of New York City.

There is also something to be said of the beautiful cinematography by Eddie Linden, J. O. Taylor, and Vernon Walker.  One moment in particular stands out: when the ship is coming close to the mysterious island.  The fog that envelops the ship as they come slowly to the island is beautifully shot, a sequence full of suspense, mystery, adventure, and courtesy of Cabot and Wray, even romance.

Adding to this is Max Steiner's brilliant score, which builds on the suspense of this scene in particular, but never lets up from the thrill of the natives calling for Kong to Kong's tragic fall. 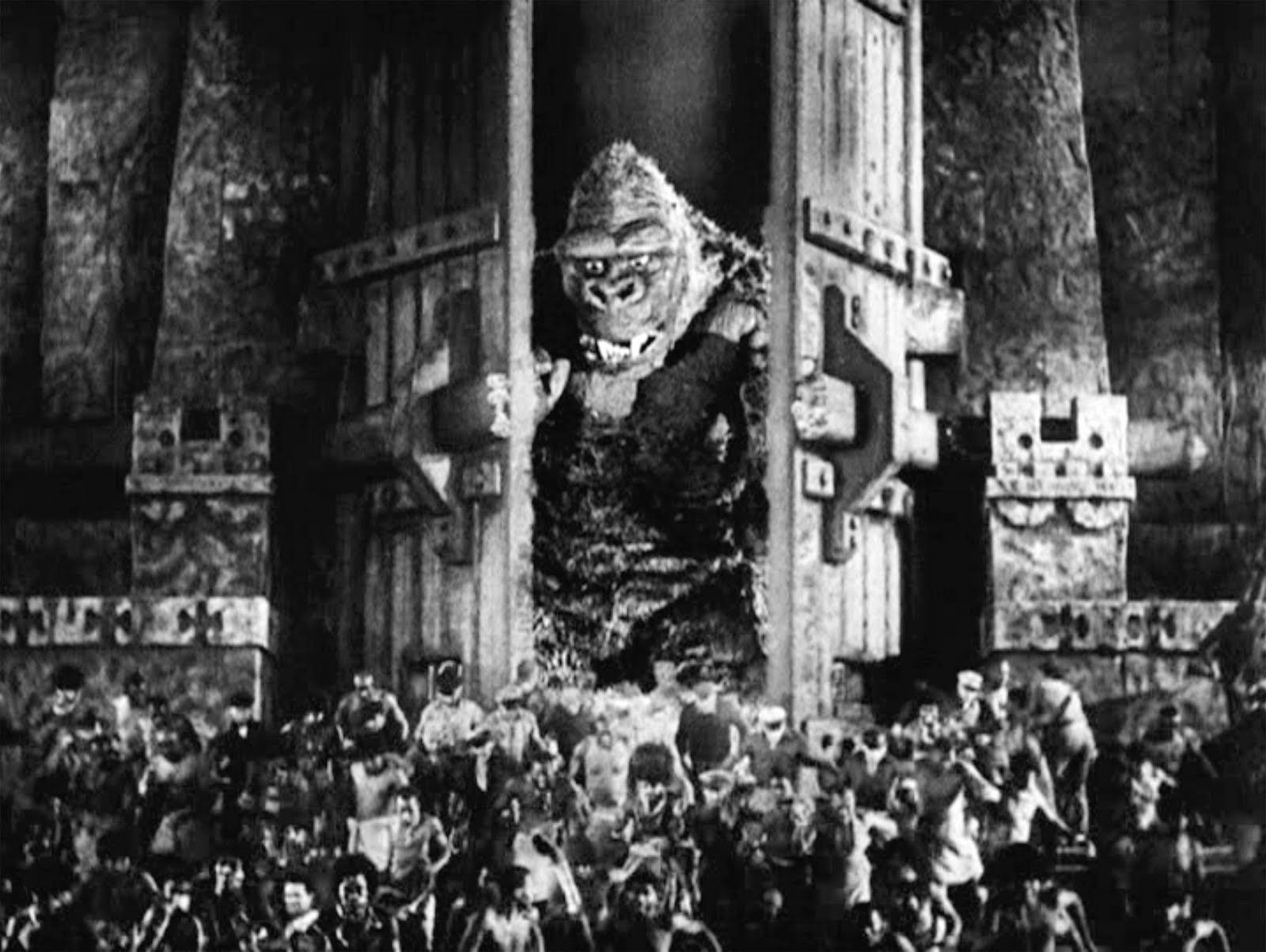 On the technical side, the greatest credit goes to Willis O'Brien and his simply spectacular special effects.  Kong appears, even nearly eighty years later, amazingly realistic.  Perhaps if one looks real close we can see that Kong is a stop-motion figure, but when watching the screen, even when Kong is in close-up, his movements are so real we completely accept what we see as real.

Kong's first appearance on screen is amazing: a spectacular and amazingly realistic creature that appears thoroughly natural.  There's no other word for Kong apart from 'spectacular'.

Even better, the composite shots of the humans interacting with the creatures, such as when the rescue party comes across a dinosaur, are blended so well that we hardly realize that is a rear-screen projection.  O'Brien and his crew blended the shots so well that few films from this era can match how well they work together.

I digress to say that I saw the first few minutes of Judgment At Nuremberg earlier, and it was obvious that the ruined city was a film screened behind the actors.  For 1961, it looks obviously fake.  King Kong, twenty-seven years earlier, conversely, looks so natural that one can easily believe the island and all their creatures are fully alive and real.  King Kong today is one of the standards by which all special-effects films should be measured: the craftsmanship behind it is simply that good.

Granted, perhaps today, they may not be as convincing as they would have been in 1933, but they still hold up amazingly well.

The performances in the film are also brilliant.  Fay Wray could scream like no one else, and she photographs beautifully, but credit should be given to her as an actress in that the non-screaming, non-Kong scenes are done quite well.  She brings a youthful naivete and sense of adventure to Ann, making her both sweet and eager for something better than trying to steal apples for food.  Her scenes with Cabot as the love interest are played excellently, where the subtext of their 'dislike' is played so clearly we know these two will be in love before the final reel.

Armstrong is also strong as the eager Denham, a man who cares about making a film people will want to see.  He has a great enthusiasm and can even bring a light bit of comic relief in his enthusiasm to bring Kong to the world at large.

King Kong is an amazingly thrilling adventure: I did gasp when during Kong's rampage he throws a woman out the window.  Through all the climatic finale, even realizing that Wray was in front of a rear-projection screen, the pacing, the music, the directing, and the special effects are so well mixed that it creates a sense of tension and danger that never lets up.

Everything about King Kong is so thrilling that to its enormous credit it still holds up as a great adventure, and truly one of the great films of all time.

If there are any flaws within King Kong, it is the imagery of the non-Caucasian characters; although it's suppose to be the South Seas, the natives look curiously more stereotypically African than Polynesian, and add to that the character of the cook, Charlie the Chinaman down to his English.  Alas, these are products of their time, but on the whole very minor flaws to a truly great film.

By the end of King Kong, I won't deny I came close to almost shedding a tear for the big beast as he comes to his tragic end.  Perhaps Beauty did kill the Beast, but King Kong is a true beauty of film that will thankfully never die.