A Dangerous Method: A Review 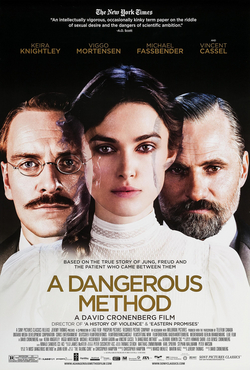 The Wizards of Id And Ego...

I won't claim to have a great background about the theories of Sigmund Freud vs. Carl Jung.  From what I know, Freud believed that a great deal of a person's neuroses were based on sex, while Jung had a more mystical bent, believing that archetypes from our ancestral pasts influenced our thinking today.  A Dangerous Method is the story of how these two great thinkers eventually split, and not surprisingly, a woman came between them.

1904: Sabina Spielrein (Keira Knightly) is sent to a hospital for mental health issues.  Her doctor, Carl Jung (Michael Fassbender), is a proponent of the 'talking cure': having the patients talk and via that dig into the source of their troubles.  Jung appears happily married to Emma (Sara Gadon) and with the hopes of a family, in particular a son.  Jung, however, also harbors a hope to meet and correspond with the famous Dr. Sigmund Freud (Viggo Mortensen), who he greatly admires.

The next year, Jung and Freud do meet, and they begin to explore the depths of the mind.  However, Sabina, who has gone from patient to assistant and aspires to be a doctor herself, cannot appear to mask her fixation with sex and with Jung.  Jung also has the whispers of patient Otto Gross (Vincent Cassell), a libertine who never shrinks from upsetting bourgeois convention to fulfill his own sexual pursuits.

With Otto's words in his ear and Sabina's romantic overtures, Jung takes his own version of the talking cure: he talks himself into taking her as his mistress.  Sabina has her kinky side: she likes to get whipped, and the good doctor goes along with it, though he doesn't look like he's getting any pleasure out of beating her.

Soon, even Freud hears about this, and at first the respectable Jung denies this, but later when Sabina threatens to go very public, he confesses.  Emma won't let him go, he doesn't want to go, and while later on they do have a brief resumption of their trysts Jung keeps things for the most part professional.

The divide between Jung and Freud continues: Freud believes nothing exists outside the material realm and thinks people cannot be 'fixed', merely 'treated'.  Jung, however, believes that there are no coincidences, that dreams literally can come true and that there is something more than beyond Freud's philosophy.

The ultra-rational Freud and the slightly more mystical Jung formally break, and despite Sabina's efforts to reconcile them, their two ways of thinking are too great and the break is permanent.

Ultimately, we learn that Jung has taken another mistress to which Emma turns a blind eye, and that while his life ended peacefully Sabina was eventually hunted down and murdered by the Nazis in the Second World War and Freud was chased out of Austria, dying in exile in London.

A Dangerous Method, stripped of its intellectual veneer, is at its heart the story of a fling, a middle-aged man getting his freak on with a pretty and pretty unstable young thing.

Personally, I disagree with how I understand Freud's view that sex and/or its suppression is at the core of everything, but I digress.

When Jung begins his affair with Sabina, we're suppose to believe it is because he wants release from his socio-sexual repression to embrace the release of his desires.  For my view, I think it is selfishness, not repression, that prompted the liaisons. 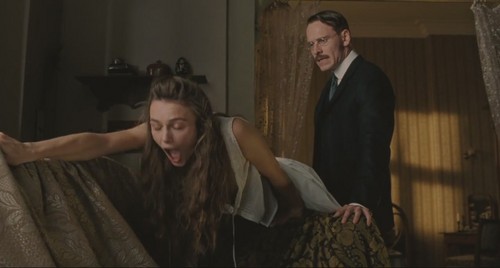 Jung took a mistress not to free himself but because he wanted to fulfill his own desires.  What Sabina offered was a vehicle to pursue those desires, not a release from them.  She invited, he accepted: it isn't all that complicated.  With Sabina, he now had an opportunity to indulge himself, free from the restraints of a married life.  There's nothing suppressed about it; he did it because he wanted to, no more, no less.

A Dangerous Method to my mind is less about the growth of psychoanalysis and the separation between the excessively rational Freud and the more ethereal Jung and more about a man who attempts to justify taking a woman who likes to be whipped as his floozy.

What one should think on while watching A Dangerous Method are on the positives.  David Cronenberg gave great attention to recreating pre-World War I Vienna, in particular with the sets.  Jung's methodology in studying the core issues that trouble people's minds are well-brought on screen.

Christopher Hampton's screenplay based on his own play The Talking Cure, which is based on John Kerr's book A Most Dangerous Method, does a good job of showing how Jung and Freud are growing apart in their thinking.

The best scene is when Freud and Jung are at a conference, discussing the cause of Egyptian Pharaoh Akhenaten's belief in monotheism.  The subtext between them as they state their views on how perhaps the Pharaoh's views on his father affected his views on God and thus supported each of their views on psychology; this scene is so well spoken and well-acted by Mortensen and Fassbender.  It's clearly understood that while they may be discussing Akhenaten, they are really lobbing critiques on their views on individual vs. collective unconscious. 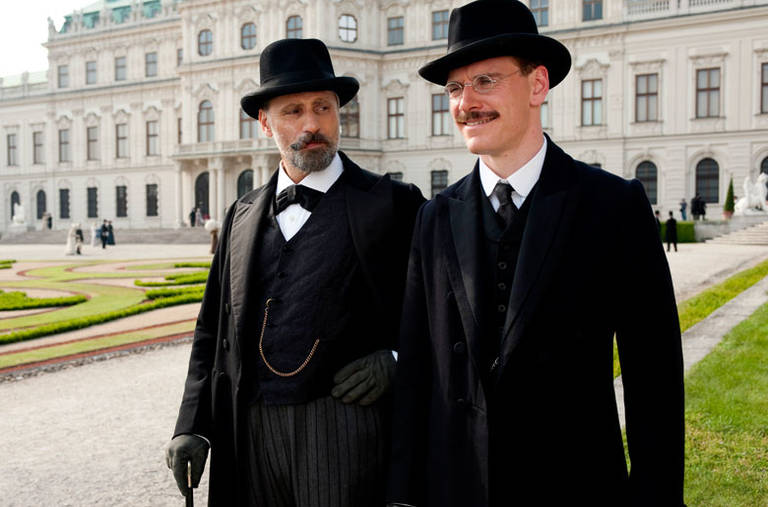 Both Fassbender and Mortensen play their characters excellently: the former a man who is searching for something outside himself that will lead him to a breakthrough in helping those with troubled minds, and the latter as one who knows there is nothing outside of himself at all.  Neither is portrayed as wrong or as a villain to the other's search, but more as two people who start from a certain point only to end up on different roads, where at times their professional respect for the other's accomplishments are masked by their stubborn refusal to accept that the other may have a point.

Knightley is a curious fish in A Dangerous Method: sometimes her physicality during her moments of instability veer dangerously close to parody: her jutting out of the chin, the way her body contorts to resembled a beheaded chicken.  I also worry that when Jung breaks with her sexually, she comes close to issuing the Edwardian version of "I'm not going to be ignored" a la Glenn Close in Fatal Attraction.   Still, one has to give her credit for not holding back on portraying the negative of Sabina if even though at times her fixation on getting whipped is almost cause for laughter.

While A Dangerous Method at times goes more into Jung's affairs and the sadomasochistic side of it than in the battle of the minds entre Jung et Freud, as a film A Dangerous Method is a well-made, well-acted period piece on a more intellectual subject than usual.

For that, the film is worth a look.  However, I still hold that perhaps there should have been less attention paid to the spanking of Sabina for her own kicks and more into how Jung came to see a spiritual side to psychology that Freud would never accept.  After all, I do think that sometimes a cigar is just a cigar.