What's Your Number?: A Review

I've seen Bridesmaids. I've seen Made of Honor.  Somehow, someone must have thought a mix of both would be a great comedy, for how else to explain What's Your Number?, as sad and unfunny a romantic comedy can be without being either romantic or comedic.

Ally (Ana Faris) has gone from bed to bed without success.  As if that weren't bad enough, she just got fired from some vague idea of a job which she's the only one who doesn't get that she's fired at first.  What's a girl to do?

Get drunk, of course!

Add to this the fact that her sister Daisy (Ari Graynor) is getting married, so who gets to be maid of honor?  To Ally's horror, she reads a magazine article stating that the more men a woman sleeps with, the lower the chance of her getting married are.  At the moment, she has slept with 19 men, so she swears off sex until it's The One.  To celebrate, she gets drunk and has sex with the guy who had fired her (The Soup's Joel McHale).  Now that she's at 20 ex-sexmates, she knows it's all over.

Yet perhaps there is hope.  Her neighbor, local man-slut and 'musician' Colin (Chris Evans), just happens to know how to track down people, having come from a family of cops.  In exchange for helping her track down her exes on the chance that one of her previous lovers was The One, she will let him hide in her place to get away from his own high count.

We go through one sorry escape to another, until Colin comes upon Jake Adams (Dave Annable).  He's sweet. He's rich. He's handsome. He works for a non-profit organization that helps children. He saved himself sexually for Ally, even though she had already had sex with one or two men before she slept with Jake, who lost his own virginity to her in high school.

Jake is perfect in every way imaginable; so obviously, she's going to go for Colin.

As if no one saw that coming.

Thus, we get the requisite 'chase down your love' ending scene, throw in some really bizarre moments which I'll get back to and end with two people who are meant to be together even though nothing indicates they should be. As I watched What's Your Number?, I actually began to think that Gabrielle Allan and Jennifer Crittenden didn't even try to pretend to be original in their screenplay. Everything about What's Your Number? was lazy and idiotically predictable.   Not only that, some things were downright ridiculous.

Take for example the character of "Disgusting Donald" (Chris Pratt).  He's suppose to be 'disgusting' because of his appearance long time ago.  Today, Donald is anything but disgusting.  The first time he shows up, fine.  It's just another of her long parade of exes who just happens to appear and offer a chance for Ally to be hysterical in the crazy sense of the word, not the funny sense.

Then, for some reason known only to Allan, Crittenden, and director Mark Mylod, he shows up two more times but isn't part of any actual part of the story.  Not surprisingly, Donald becomes annoyed by Ally randomly popping into his life; it's especially irritating when she shows up at his wedding. What are the odds Donald would be getting married the same day Daisy is?

Again, What's Your Number? is a romantic comedy that is neither romantic or comedic.  Granted, I did laugh once when Ally attempted a British accent with Simon (Martin Freeman), the British boyfriend Colin tracked down for her.

This, however, was undercut by being Donald's second appearance because somehow Ally and Colin thought Donald's house was the open house Simon had.  It makes one wonder how Colin, master sleuth, could have failed to realize how close Donald and Simon lived. 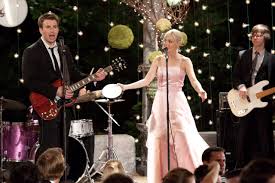 Normally, that would make Colin look stupid, but since he's played by Chris Evans, it doesn't bare to dwell much on a character's intelligence.

Every character is so predictable, so standard, that you end the film thinking Ally doesn't deserve to be with anyone.  Actually, you end up thinking Ally deserves to be locked away in an insane asylum.

At heart, Ally is a complete shrew of a woman: narcissistic, thoughtless, and yes, a slut.  To a certain point, I like how looking for a job was not a priority for her in any way.  The time and money she devotes to track down all her past lovers she decided were well spent, while not giving any thought to actually finding work that would pay for her bills.  Somehow, this point was never, or perhaps barely, addressed.

Yet this appears to be highly bizarre: we start What's Your Number? with her getting fired and end up  waking  up with her ex-boss in bed with her, so it's obvious she has no income coming in.  Yet she can fly off to Miami and Washington, D.C. in this nutty pursuit of all her ex-lovers, not in the pursuit of another job (and honestly, some self-respect).

In this time of deep economic trials, seeing some woman flying off all over the place looking for a former one-night stand over looking to get a job is almost a slap across America.

Perhaps Farris did as good a job as she could with this ridiculous, stupid, and vapid character who has no ounce of intelligence or shame.  I doubt Meryl Streep could have made Ally into anyone we could or would care about.  To my memory, this is the first film of Farris' I've seen, and frankly, I don't want to see another Farris film if it is going to be more of the same.

As for her nineteen to twenty lovers, they all were like everything else in What's Your Number?, totally predictable.  Only Freeman attempted to take this as seriously as he could, going from "Wow, it's an old girlfriend" to "Get me away from this psycho" in short order.

Every other man from her past was nothing short of sad or horrifying: the gynecologist who doesn't remember her until seeing her vagina, the old boyfriend whom we know almost right away is gay: all uninspired and uninspiring.

Actors as good as Freeman and Zachary Quinto are reduced to mere cameos.  McHale is great on The Soup, but I don't want to see his ass.  Even worse, Andy Samberg, much touted in the trailer, is on screen for about a minute in a flashback scene.  Add to that in his very brief appearance he has a puppet attached to his hand, bringing flashbacks of The Beaver.

Let's now turn our eyes to Chris Evans.  Whatever wry social commentary could have been made from the fact that he's a male version of Ally minus the neurosis would of course go unexplored.  Instead, Evans played a Chris Evans-type, the amazingly good-looking man with an easy way with easy women.  In What's Your Number?, Evans oozes self-confidence, doing here what he does in almost every film with the possible exception of Captain America: be himself, the cocky hot guy with a lackadaisical attitude towards everything (including his job of 'actor').  Here, he's back to form of a typical Evans 'performance', and back to form in more ways than one.

I was amazed at how often we were called in to admire Evans' physical perfection.  I got the sense that Evans is a shameless exhibitionist.  His first scene shows him nearly nude, only a strategically held towel keeping him from a Julie Andrews moment.  Again and again he is either naked or at the very least with a gratuitous shirtless scenes.  It's nice to see him so fit, but how is any of that suppose to make up for the fact that Colin is a slut and a loser?

Oh, yes, I forget: he's Chris Evans.  No wonder brain-dead women like Ally would pick him over the handsome but not muscular Annable.

What's Your Number?, despite being made by women, is misogynistic, making the case that all women are desperate to marry, and willing to forsake what in the past would have been considered a catch for the sake of a hot body.  This is no different from other lousy romantic comedies which are neither, and the fact that they keep making them only tells me the intelligence of people in love just goes down, down, and down.

I can only hope that soon and very soon, their number is up.