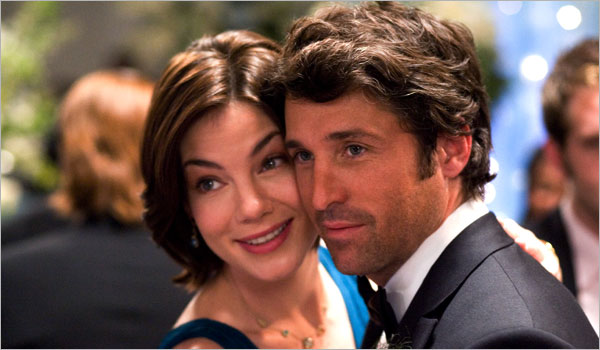 It is a truth universally acknowledged in modern romantic comedies that a man can screw all the women he wants because every woman he meets not only wants to get screwed by him but believes she should be treated like a bargain basement hooker in exchange for the pleasure of his time.

This has been a curious trend in what passes for rom-coms, one where the male lead is catnip for women, all women want him, and the only one that has some sense of pride and/or brains eventually will learn her life was empty and meaningless until she finally falls to his charms. Then and only then will she discover that Ah, Sweet Mystery of Life.

Made of Honor is in that vein, but curiously, it goes one worse in making everyone either incredibly dumb or incredibly narcissistic.

Tom (Patrick Dempsey) meets Hannah (Michelle Monaghan) in college in the cutest way: he tries to practically rape her. Actually, he's just trying to have sex with her roommate who had agreed to meet him in her room and mistook Hannah for the other girl. Hannah's horrified, Tom merely confused. It's this night that a friendship emerges between Tom & Hannah.  Tom's invention of the coffee collar will award him a massive fortune.

Fast forward ten years. Hannah looks on with bemused disapproval on Tom's many, many, many affairs with women eager to be treated like doormats just for a chance to spend a night with him. She seems happy to accompany him everywhere, even to his father Thomas Senior's (Sydney Pollack) sixth wedding. Shortly afterwards, Hannah's job as an art restorer finally has her leave Tom's side for six weeks in Scotland.

In that time, Tom falls apart: he can't find any other woman who knows what he likes to snack on or take a bit of cake from her plate. He goes so far as to wake her at 3 in the morning just so he can tell her banalities. With her absence, Tom realizes he's in love with her. He'll tell her once she returns, but she comes back engaged, and engaged to Colin McMurray (Kevin McKidd). Being her best friend, Hannah asks Tom to be her Maid of Honor (hence the pun of the title) and he agrees, just for the chance to ruin her wedding and, to quote his buddies, "steal the bride". Hilarity and hijinks ensue. 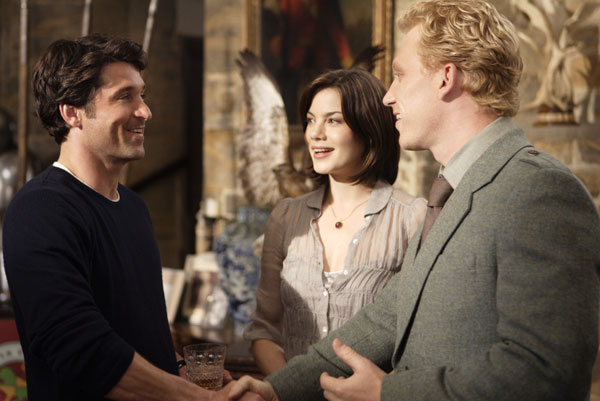 Let's start by asking the obvious question: why would these two want to be friends let alone best friends with the other? Tom's never treated any woman with a modicum of respect, while Hannah should be independent enough to find people who will respect her. If they existed in real life, neither of them would want to be around the other.

However, the first real problem is that this is not a romantic comedy. For it to be one, there has to be romance. As I watched, one thought kept emerging and reemerging in my mind:


This Isn't Love. It's Codependency.

Tom's never thought of her feelings. He's never cared that she's almost thirty and has no romantic relationship or life outside of him. He seems oblivious to the fact that she has few if any friends beyond him. If her leaving him for six weeks makes him so miserable, what would happen were she to go on vacation, or a girl's night out?

I figure she didn't: her whole life it seems, is devoted simply to cater to his needs/wants. This was essentially confirmed in Made of Honor when we see the wallpaper on her cell phone: it's of them together from a previous vacation.

He comes to the conclusion that he's in love with her only because she knows him so well. In short, he's so in love with himself that he decides he loves a woman because she has subjugated her life for him. When she finds another man who actually cares about her and treats her like a Duchess (more on that later) it sends him into a panic, and he is determined to keep her in his life by any means necessary.

Never was such obscene narcissism portrayed as romantic.

Another problem came to the forefront when Tom spends the day with Hannah to 'help' her in his role as Maid of Honor; she says that he didn't have to "clear his day" to do so. It's at this point when my friend Fidel Gomez and I look at each other in sheer disbelief.

"Cleared his day of WHAT?" we asked each other almost simultaneously and incredulously. "He does do anything except play basketball," Gomez said. "And schtup beautiful women," I added. The only outside activity Tom ever engaged in was playing basketball with his friends. He never actually does anything, and as much as one loves Starbucks, I don't think they sell enough for him to live such a lavish lifestyle year in, year out. Add to this sorry mix Hannah's fianceé. He's suppose to be perfect: rich, handsome and incredibly endowed. As a side note, does anyone else think a group of straight men gawking at another man's penis is just a touch creepy? Add to all that is that Colin is a literal Duke, a titled nobleman.

Allow me a digression on titles and to begin a very long habit of getting hung up on details.

In order for Colin to be a Duke he would have to be the eldest surviving son of the previous Duke or the son of the reigning monarch. Since both of Colin's parents are alive and Her Majesty Queen Elizabeth II is the head of state in Scotland, how can he be a duke? I could believe a viscount, or earl, or even a knight (Sir Colin), but a duke?

Made of Honor is filled to the rafters with wild leaps of logic and thoroughly stupid characters and situations. We're suppose to believe that Colin, Duke of Earl, and Hannah traveled together for a month and will get married in two weeks. That lead me to wonder if those four weeks were tied to the six weeks she was suppose to be working or if the museum just let her take gobs and gobs of vacation time. Yet for all the time they spent together, she was unaware that Colin played the bagpipes every night (I guess they hadn't slept together in all the time).

Here, when Colin doesn't let Hannah take a slice of cake from his plate, it's only then that she realizes Tom may be a better fit. What, they never shared an intimate dinner in those six weeks? I kept wondering what the rush was.

You also have some truly awful scenes. Perhaps it's to my credit or a sign of my naïveté, but at Hannah's bridal shower I had to have "thunder beads" explained to me. My friend Fidel Gomez was especially bothered by the fight between Tom and Hannah afterward the bridal shower for which Tom had taken credit versus blame for. It was an extremely gentle fight which had no circumstances and was basically a waste of our time except it gave chance to have an elderly woman snap thunder beads around her neck like a necklace. While you have beautiful Scottish scenery to admire, the bridesmaids were not funny, the future in-laws horrid, the Highland Games embarrassing and the church scene clichéd to the max.

I will confess to having laughed once. It was at hearing a particular line spoken by a bridesmaid who had slept with and been dumped by Tom. I laughed because I thought this could be one of those immortal lines that will be remembered by generations of film goers. "Service me, bitch", she pleads as she tries to rape Tom. Somehow I couldn't help laughing.

I feel bad for Michelle Monaghan. She's proven she can act in Gone Baby Gone, so why is she wasting her talent in nonsense like this? Kevin McKidd may be good as he was in the underappreciated Journeyman, but even with his native accent he can't rise above the shoddy material.

As for Dempsey, this was clearly a vehicle for him, capitalizing on his success on Grey's Anatomy to get him back into film and perhaps erase memories of such early efforts as Can't Buy Me Love or Loverboy. He didn't. Worse off is Sidney Pollack. He did the best job as Tom's philandering father, but to think this was his final film.

I conclude with this: Bogart was no pussy.