A Lovely Flight of Fancy...

I find it curious that American filmgoers think animation is a purely children's genre. My theory is that people think animated films are the same as the cartoons they watched on Saturday morning. This might explain why parents took their progeny to watch UP, the latest Disney/Pixar collaboration, and why some people may avoid it. Truth is, UP is one of the truest films made this year: a beautiful, thoughtful, mournful and ultimately uplifting film (no pun intended).

UP begins with an old-style newsreel telling the exploits of Charles Muntz (Christopher Plummer), an explorer who is determined to prove the existence of a bird after the skeleton of the animal he brings back is declared a fraud. Muntz is still a hero to Carl Fredericksen (Ed Asner), a child who dreams of having similar adventures in the wild. Carl meets Ellie, a girl who shares and even exceeds his passion for Muntz-worship, and soon we see they marry and build a life together.

Tragically, Ellie dies, and their dreams of going to Paradise Falls together die with her. Carl, alone, continues to live in the house they shared while major construction goes around his house. He is interrupted in his mourning by Russell (Jordan Nagal), an eager Wilderness Explorer who wants to help Mr. Fredericksen in order to get his final badge, which is the "Assisting the Elderly" badge. Carl wants nothing to do with him or anyone really. An incident forces Carl to be sent to a retirement home, but on the day he is suppose to leave, he takes all the balloons he has and literally pulls up stakes to fulfill the shared dreams of living beside Paradise Falls.

Unfortunately, he didn't count on Russell accidentally being carried away along with the house. 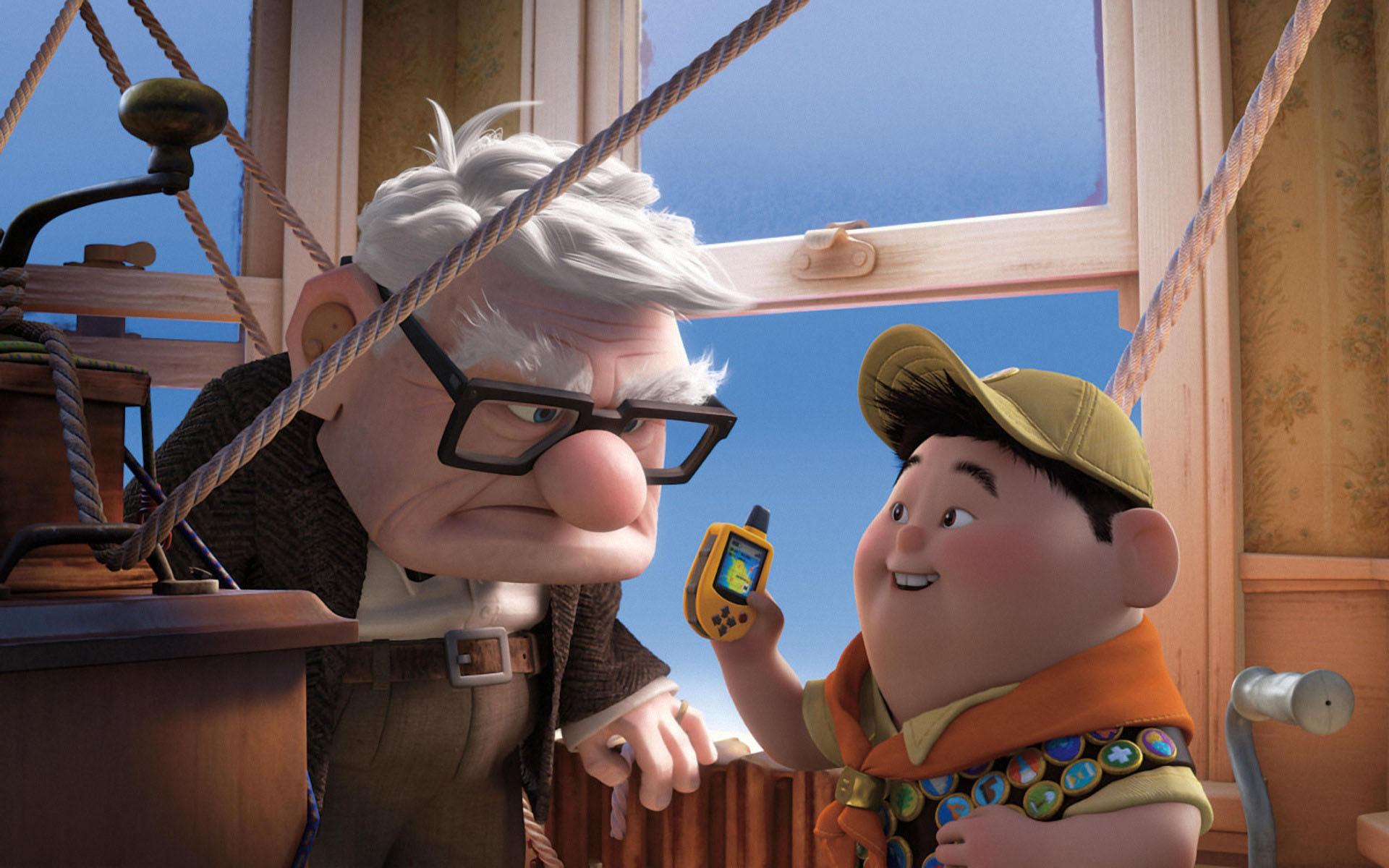 They do make it to the falls but the wrong side. Together, they trek toward Carl's goal, using their body weight to carry the house to the right side, only to be sidetracked by a large bird whom Russell takes to his heart and calls Kevin despite Russell not realizing that the bird is female. They also encounter Dug, a sweet albeit slightly dumb dog with a talking collar that allows him to communicate with them.

They discover Muntz is still very much alive and unhinged in his quest for the bird. Carl realizes Kevin is that bird, and that Muntz is no hero but instead quite insane and will stop at nothing to get at them.

UP is more than an adventure story with a fantastical premise. It really is about life, and how it goes on even when we lose people important to us. Each of the characters has a loss in their life: Carl his wife, Russell his father, and they find that while the people they would want to be there may not be, there are others who can be there for them.

More than anything, UP continues in the Pixar tradition of making the most human of animated characters. They continue to show just how important it is to care about your characters. We care about Carl and Russell; we even care about Kevin and Dug. Although they are computer-generated, they have more emotion than John Conner in Terminator: Salvation or Logan in X-Men Origins: Wolverine.

Neither of those films, with their large budget and louder explosions, has the power of UP.

When Carl takes his house up into the air, it is an extraordinarily beautiful moment on film, which is a rarity these days. The opening itself is a beautiful montage that says so much about Carl and Ellie without having to use words, and near the end we get another beautiful montage.

Carl is finally at the right side of Paradise Falls, and he begins to look at the scrapbook his wife kept, My Adventure Book. Before, it had been a collection of her early life with space left over for "Stuff I'm Going to Do". He looks at it mournfully, but then he discovers these formerly blank pages are filled...filled with their life together. At the end, there's a message from Ellie, telling him their life together was an adventure, now go and find the next one. Even now, it's one of the most moving and beautiful scenes I've seen all year.

Not enough credit has been given to Michael Giacchino's beautiful score . It's reminiscent of the music for another film that features flying balloons: Victor Young's Oscar-winning score for Around the World in 80 Days. I hope that the Academy will remember the music come nominating time. It seems clear that UP is a sure bet to win Best Animated Feature. It just seems a shame that it might be overlooked for Best Picture. True, it is too soon to make those kinds of predictions, but UP is the best film I've seen all year.