The Tenth Doctor: An Introduction 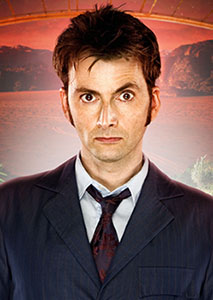 
**Author's Note: I had planned to review the Doctor Who catalog on this site, but given the sheer number of stories I opted to spin-off those reviews to a separate site: Gallifrey Exile. As such, readers will find reviews may hop from one site to another. Reviews are collected at a link at the end of this essay. Also, this essay was updated on January 2021.

My mother never understood my love of Doctor Who. She thought it was a stupid show and made it a point to tell me as such. She would also add that being ugly was a prerequisite to play the Doctor...with one exception. After looking at David Tennant, she decided he was halfway decent-looking.
This seems to be the consensus: that David Tennant is perhaps one of the most attractive men to play the role. In retrospect, a good fifteen years separated from his debut story, Tennant's physical appeal and crafting the Doctor as an object of romantic yearning, even physical desire, may have been a mistake. The romanticism and lust factors may have been both a blessing and a curse to the show. He was certainly swoon-worthy to many a fangirl and fanboy, but could Tennant's looks have been the catalyst for creating whole seasons where every Companion save Donna fell in love with him?
He was perhaps the most romantic of Doctors, one that loved sweeping in to rescue damsels in distress (case in point, The Girl in the Fireplace). Oftentimes, it was suggested that he fell in love to those women he encountered (the aforementioned Girl in the Fireplace, Doomsday, Forest of the Dead). This goes against the Third Doctor Jon Pertwee's view that there should be even a hint of romance between the Doctor and his Companions.
I think that was a good policy, to make The Doctor a mentor not a lover, someone who in Pertwee's words was fond of his Companions but that fondness is different from desire. However, perhaps Tennant's good looks and easy manner made him too hard to resist. It now makes me wonder whether the emphasis on romance shifted Doctor Who from a good, family science-fiction show into a space soap opera: Lust in Space if you like.
Perhaps this is why, in the future, the then 34-year-old Tennant was succeeded by the even younger Matt Smith, to continue making The Doctor not into an intellectual hero but an object of worship and erotic fixation. That may explain why when the much older Peter Capaldi came around, more than a few fans objected to not having that romantic, swooning figure but a crotchety old man.
Tennant's looks are not his fault, and he showed himself to be a fine actor and one of the best Doctors. However, with the benefit of hindsight, perhaps the focus shifted from "The Doctor" to "David Tennant", and in the same way Classic Who never fully recovered once Tom Baker left, NuWho has yet to hit the heights the Tennant Era had. 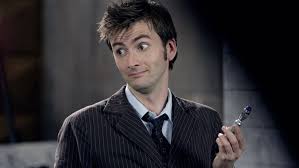 At the time, I thought David Tennant was a welcome change from Christopher Eccleston. This isn't to say the latter was terrible, but he was a terribly unhappy Doctor. Tennant, on the other hand, is for the most part quite jolly. He has a touch of Troughton: a sense of wonder about the things going on around him. He gets Pertwee's ability to be authoritative, even a bit bossy when the need arises. Tennant also brings something of Davison's vulnerability to the role. This is informed by the fact that The Doctor's home world of Gallifrey is supposed to have been destroyed. While he is a happier Doctor than Eccleston, Tennant can also rage like the best of them.

As I revisit this essay a good twelve years later, I can now confess that I was like many a NuWho fan too enthralled with the show to be analytical. I let my emotions carry me, until Love & Monsters.
Love & Monsters shook me from my fever dream of thinking every Doctor Who episode was brilliant. I was angry at how insulting it was to the fanbase. I was horrified at the oral sex joke, one that left me so stunned I had to watch that part just to be sure I had heard what I had heard. It was an ugly, ugly episode, one so horrifying and hideous I essentially quit watching Doctor Who right then and there. I skipped Fear Her out of protest (which I have since seen and thought it too was awful), stumbled through Army of Ghosts Parts I & II, then stopped watching altogether.
That's how awful I thought it was. The association was simply too awful for me to have anything to do with it. I also thought the battle between the Daleks and the Cybermen was not all it could have been. All the pity. I did think his first season (Series Two) was overall quite good.
It wasn't until Matt Smith took over that I decided to give Doctor Who another try. When he handed over Smith. I hoped for great things.
I was, sadly, unprepared for that Legendary Legend of Legendness, River Song, but that's for next time.

Next, The Eleventh Doctor: An Introduction

Email ThisBlogThis!Share to TwitterShare to FacebookShare to Pinterest
Labels: 10th Doctor, Doctor Who