The Ninth Doctor: An Introduction 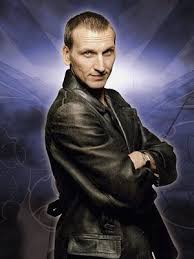 The Ninth Doctor:
Christopher Eccleston (Born 1964)
**Author's Note: I had planned to review the Doctor Who catalog on this site, but given the sheer number of stories I opted to spin-off those reviews to a separate site: Gallifrey Exile. As such, readers will find reviews may hop from one site to another. Reviews are collected at a link at the end of this essay. Also, this essay was updated on January 2021.

I was very excited when Doctor Who was revived in 2005. So excited that I cajoled a friend of mine to let me watch it at his house since I didn't have cable or satellite. I believe my faith is justified.


Christopher Eccleston's Doctor is in a word: manic. He seems in a hurry to get things done. If the storyline is to be believed, Gallifrey no longer exists. His home world has been destroyed, with him the only survivor. This would make him more dour than his predecessors, and while Eccleston's performance shows him to be angrier, he also does allow some goofiness to come through.
There is a tinge of regret to him, as if a shadow will always be with him, haunting him perpetually. He also oddly seems to be the most "regular guy" Doctor. There's no air of sophistication or culture that the Third or Fifth Doctor had. Instead, he seems like just a bloke who happens to be a Time Lord.


This might explain that chip on his shoulder he seems to carry, as if he's always worried someone will look down on him. He has a Northern accent, which distinguishes him from all other Doctors and reinforces that outsider status. Perhaps to the class-conscious British this might be an issue of concern.
The Ninth Doctor's anger also seems to find more comfort with violence than McCoy's. He has no problem being vengeful, downright evil, with the 'last' Dalek. He goes so far as to threaten to kill him. Yes, it was to save his Companion Rose Tyler, but it still is a marked departure for someone who used to rail against violence to solve things. Perhaps this was a manifestation of the actor himself, who left the series after one season. I don't know what his plans in relation to Doctor Who are, but he seems to be taking a page from Tom Baker: respect but a wary distance.


Now, with the new series there is a change. Rather than having two-to-four part stories, each story is an individual episode with one or two exceptions. Out of the stories in his tenure, the best to my mind is Dalek. It finally makes the Daleks the terrifying creatures they could be. I also thought The Unquiet Dead (where he meets Charles Dickens, brilliantly played by Simon Callow), and Father's Day were well-written and executed. I really don't think there was a bad episode in the bunch. 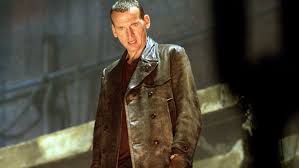 Now that I've had well over a decade to reflect on NuWho, I think Eccleston has been wildly underrated. He brought a mix of mirth and menace to the role, both goofy and frightening. I think in retrospect that his costume worked well: the leather jacket and overall black ensemble showed him to both working-class and dark.
The teaming of the Ninth with Billie Piper's Rose was a mix between romantic and friendship. If memory serves correct I don't think the romance was built up to the extent it would be in the future, and perhaps if Eccelston had stayed on it would have been tapered down.
I also think that my wild enthusiasm was perhaps an emotional rather than intellectual reaction, for as good as I think some of the stories are, I cannot recall any of them with great detail apart from The Unquiet Dead and The Empty Child Parts 1 & 2. The "farting aliens" perhaps should have been a sign that things were not as I imagined them, and while Captain Jack Harkness made for a good guest character, his eventual dominance in Who lore may have been a mistake.
On the whole, I think well of Christopher Eccleston as The Doctor, mercurial as both character and actor are. Time has softened my love of Series/Season One, but that is for another day.
Next, The Tenth Doctor: An Introduction

Email ThisBlogThis!Share to TwitterShare to FacebookShare to Pinterest
Labels: 9th Doctor, Doctor Who