The Third Doctor: An Introduction 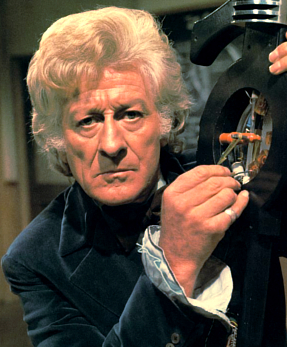 **Author's Note: I had planned to review the Doctor Who catalog on this site, but given the sheer number of stories I opted to spin-off those reviews to a separate site: Gallifrey Exile. As such, readers will find reviews may hop from one site to another. Reviews are collected at a link at the end of this essay. Also, this essay was updated on January 2021.
For the 10th anniversary story The Three Doctors, the then-Doctor Jon Pertwee met his predecessors (Patrick Troughton and William Hartnell). Hartnell was very ill at the time and this would sadly be his final acting appearance. His performance therefore had to be pre-taped and then edited to make it look like he was conversing via a monitor with his other selves.

Hartnell might have been in real life close to death, but The First Doctor could still put his successors in their place and be as sharp and curt as ever. "Ah, so you're my replacements, eh", Hartnell says with a hint of contempt in his voice. With a quick word he dismisses them both. "A Dandy and a Clown", he concludes.
Guess which one Pertwee was (hint: A Dandy).

Though Pertwee's costume was much more dashing than his predecessors and I would argue, his successors, there was method to his madness. He explained that the cloak was to evoke the wings of a mother hen, to suggest that he was a protector of those around him. Pertwee, to his eternal credit, was extremely conscious of the fact that Doctor Who was a family program and primary one geared towards children.
He took that responsibility quite seriously. As Pertwee stated in an interview for The Doctors: Thirty Years of Time Travel and Beyond, he wanted to let the kids know that regardless of what dangers The Doctor and his Companions faced, "it would be all right in the end. The Doctor would find a way out". His Doctor was more action-oriented, more gun-ho than the first two, which is curious seeing that he spent most of his time in a forced exile on 20th-Century Earth (a cost-cutting move to make stories easier to produce). Pertwee was if I understand it hired with the hopes of expanding on Troughton's more comic take on the Doctor, but Pertwee would have none of it. He was set on making his Doctor more an adventurer, and this was I think the right decision.
Pertwee made the Doctor less a figure of fun and more an authority figure. This is curious given he was also anti-authoritarian in that he disliked authority figures whom he considered idiots. His Doctor was not afraid of calling a spade a spade, quick to note where those with power were not only wrong but dangerously wrong. He was quick to dismiss being TOLD what to do, especially by government officials.

Of course, there was an exception up to a point: UNIT (United Nations Intelligence Taskforce) commander Brigadier Lethbridge-Stewart. The Doctor, having basically nothing to do on our backward little planet, found himself UNIT's Scientific Adviser, and while he wasn't thrilled about it, he became a good member of the group.
I think this adds to the idea of Doctor Who as a family show, echoing the original structure of the First Doctor. Now, rather than the Doctor as a grandfather and the Companions as a de facto family, you have the work family. The Doctor is the wise scientific mind, the Companions their eager sidekicks and UNIT as both the minds and muscle. This group worked well together, and it's a credit to Doctor Who that the cast worked so well together.

Pertwee's Doctor is wonderful because he was able to interact so well with those around him. While he always remained the star, he had little problem on-screen having an ensemble with him. The Brigadier was an integral part of the show now, kind of a double act, more Watson and Holmes than Abbott and Costello.
Curiously, it was this analogy that brought about one of the Doctor's greatest nemesis during Pertwee's reign: an evil Time Lord known as The Master. As played by Roger Delgado, he was delightfully wicked, feeling no shame, and almost taking pleasure in just how nefarious he could be. Delgado was first-rate playing against the moral but fearless Doctor, both being able to match wits in strong stories. 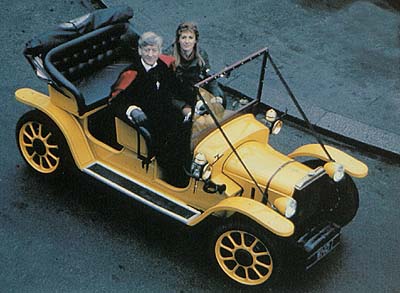 Expanding on the Who mythos, I know some fans might have a problem with the Who-mobile (aka Bessie), but I do not. We need to remember that the show was aimed for children, so we mustn't be too picky about his mode of transport. Also, let's be honest: with the TARDIS unable to dematerialize for a long time, how else would he get about?

Overall, I like how Jon Pertwee was a Time Lord of Action, who got to the point and had little interest in who he had to go over to get things done. In fact, if push came to shove I would call the Third Doctor my favorite.
Like his predecessors, he was quite fond of his Companions. When one of them, Jo Grant, decided to leave his company at the end of The Green Death, you got the sense that he was sad to see her go. Of course, this did allow for perhaps the most famous companion to come in: a scrappy journalist named Sarah Jane Smith.

Out of the stories available as of this writing, my favorite so far is Carnival of Monsters. It's an inventive double-story, one being the Doctor and Jo trying to escape a nickelodeon-type machine that captures living beings for the amusement of others, and the other involving showmen who try to interest other beings in said machine. I also thought Spearhead From Space (which introduced the living plastic monsters the Autons), was quite effective. As for the worst, I confess not understanding The Claws of Axos. Overall though, I think all the ones available work quite well, even if the lack of money sometimes shows.
Fortunately, his is the first Doctor to have no missing episodes or stories, though I understand some that were broadcast in color survived in black-and-white and then restored to color.
Next, The Fourth Doctor: An Introduction
Visit Here for my Third Doctor reviews.

Email ThisBlogThis!Share to TwitterShare to FacebookShare to Pinterest
Labels: 3rd Doctor, Doctor Who