The First Ten Doctors: An Introduction

And Pretty Doctors All in A Row

**Author's Note: I had planned to review the Doctor Who catalog on this site, but given the sheer number of stories I opted to spin-off those reviews to a separate site: Gallifrey Exile. As such, readers will find reviews may hop from one site to another. Reviews are collected at a link at the end of this essay. Also, this essay was updated on January 2021.
Now we come to the end of this brief sojourn into the First Ten Doctors.
Who is the Best Who? Who is the best Actor to have played the role? What are the best Doctor Who stories?
I don't like those questions. Each version, in my view, brought his own interpretation to the role, and each one has one perfect story. William Hartnell, who originated it, to be fair didn't have the burden of comparing his performance with anyone else. As we look back though, we can compare him and his stories to those of his successors.
Patrick Troughton brought humor.
Jon Pertwee brought action.
Tom Baker brought alien eccentricity.
Peter Davison brought a greater compassion and innocence.
Colin Baker brought outrageous egocentricity.
Sylvester McCoy brought righteous anger.
Paul McGann brought a greater romanticism.
Christopher Eccleston brought a manic moodiness.
David Tennant brought a touch of wistfulness.
Since the original posting, we've had three more Doctors. 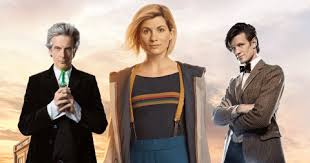 Matt Smith brought naïveté slipping to stupidity.
Peter Capaldi brought a menace to dark danger.
Jodie Whitaker brought nothing.
Now, each has his detractors and defenders, but all I think did the best their talents allowed them to, with varying degrees of success. Colin Baker and Peter Capaldi were good Doctors stuck with lousy scripts, yet they did their best.
We can argue about individual stories, but that is another matter. Ultimately, Doctor Who the program will continue, or at least I thought so. Now with the dual damage Whitaker and showrunner Chris Chibnall has done, I think Doctor Who 2.0 is done. Even with a new Doctor on the horizon, the damage has already been done. Even if Whitaker had made the role her own versus coming across as a bad Tennant/Smith cosplayer, I find that Chibnall has given her such a succession of terrible stories that no actress could have rescued the Doctor.
It's all such a shame, all this to placate a group of people who didn't have an interest in the show and didn't bother sticking around once they'd accomplish their great triumph. I gave Her a chance, but even if the Doctor had maintained being a man I would have thought such awful stories.
In the future, I hope to write reviews on the stories themselves, but I can wait. I hope to have more time.
Looking back twelve years later, I think I have the time.
What I don't have is the interest.
Posted by Rick at 6:48 PM