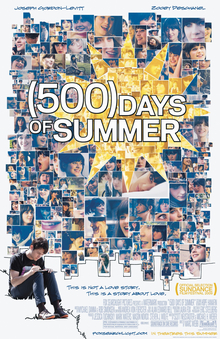 Bob Dylan's song Love Sick from his Time Out of Mind album might sum up (500) Days of Summer: "I'm sick of love/I wish I never met you/I'm sick of love/I'm trying to forget you/Just don't know what to do/I'd give anything to/Be with you".
Told in a nonlinear manner, (500) Days of Summer is about the tempestuous romance between idealistic Tom (Joseph Gordon-Levitt) and Summer (Zooey Deschanel). Tom, forever is an optimistic romantic, while Summer is more wary. As the relationship waxes and wanes from the joys of the initial beginnings to the depths of despair, Tom lets us into his world as he tells his story, jumping forwards and backwards.

This is an atypical love story in that you can actually relate to the characters. They seem real, with realistic jobs and realistic friends. You also have a slight role reversal in that Tom is the optimistic romantic who believes in The One True Love, while Summer is the more reluctant, hesitant party.

We jump from Day 287 for example to Day 14. This isn't a gimmick or as odd as it might sound. Memory sometimes works that way. We also get to see how the romance between Tom & Summer in those fabled 500 days began and ultimately collapsed.

There are wonderful moments in (500) Days of Summer that ring so true to anyone who has been in a romance in Scott Neustadter and Michael H. Weber's screenplay. The film is obviously playful: where else could you include a musical moment where Tom dances to music after his first sexual encounter with Summer.
As perhaps odd as that may sound, there is a certain logic to it all. The feeling of euphoria that comes with this is something that almost every person has experienced: one would feel like dancing after finally being with someone you've been attracted to. The next scene is late in the relationship, where we see Tom miserable and almost at the point of emotional collapse. (500) Days of Summer manages to balance both the nonlinear story and the wild shifts exceptionally well, a credit to both the screenplay and director Marc Webb.
We see how (500) Days of Summer captures that strange emotion known as love. Early in the film we hear Tom's voice describe all the things he loves about Summer as we see them on screen, culminating in the song She's Like The Wind. Later, he describes the same things but now they are the things he hates, culminating in his screaming for that song to stop. Who hasn't had that same reaction: where the things you loved about someone are now the things you hate about them?

The two leads are wonderful. Gordon-Levitt continues to show himself as a rising talent, giving a smart, sincere, and honest portrait of a man probably in love with love. His highs and lows are true, and he still looks young enough to make him a touch naïve but old enough to ground Tom in early adulthood. He's building up a resume that is eclectic but incredibly intelligent (G.I. Joe: The Rise of Cobra notwithstanding). Deschanel makes Summer both endearing and aggravating in her hesitancy to fully commit to anyone. We both love her and hate her, just like Tom.

My one complaint would be the narration. While it is limited and relevant to the plot, it was too reminiscent of the show Pushing Daisies, a program that reveled in its cuteness and quirkiness. In both instances, I found it annoying not endearing. However, that is a minor complaint.

Having endured all sorts of lousy romantic comedies where the people are stupid, the friends vapid, the situations forced and unreal, it is good to see a film which reflects a romantic relationship in a way that is real, that is true, that is funny and sad, and ultimately, relatable despite its flights of fancy and nontraditional structure.  (500) Days of Summer gives one hope that romantic comedies can be both romantic and comedic, a rare feat these days.