The Fifth Doctor: An Introduction 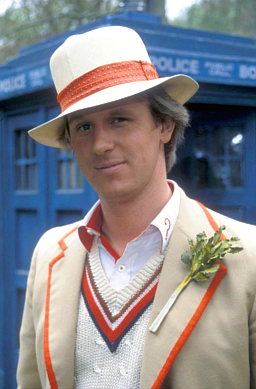 **Author's Note: I had planned to review the Doctor Who catalog on this site, but given the sheer number of stories I opted to spin-off those reviews to a separate site: Gallifrey Exile. As such, readers will find reviews may hop from one site to another. Reviews are collected at a link at the end of this essay. Also, this essay was updated on January 2021.

In the Fifth Doctor story Black Orchid, the Doctor plays of all things, cricket. Somehow, it seems fitting that this most British of institutions enjoys this most British of sports. It certainly matched his latest ensemble. It is also perhaps a recognition that Peter Davison was the youngest actor to play the Doctor in its original run at age 29.
Despite his youthful appearance, Davison worked to make his Doctor "an old soul", someone who had millennia of wisdom. Davison tried to remind viewers through his performance that he was really an amalgamation of four other people, drawing from various elements of past Doctors. Sometimes it worked, sometimes it didn't. Davison, however, did manage to put his own stamp on the role. He was the Doctor who was most human of the lot.
Here is where I think that at times, he was hampered by a more meddlesome producer. John Nathan-Turner wanted Davison to play things perfectly straight as a counter to the increasingly jokey Tom Baker, but that ended up suppressing part of the Doctor's whimsy. It seemed strange to force such a young-looking man to be so stern, but it was in my view an effort of course-correction that went too far the other direction.
To me, this Doctor was a little more hesitant to act, almost as if he didn't want to be where he was at. He could do the job required, but his more introspective nature made things difficult. He had a sense that adventure was something to be endured. No, he wasn't terrible in the role. It was just that he knew what a high cost there was to his travels in time and space.
He also had an early run of embarrassing stories and poor Companions. Even as a child, I knew that there was something wildly wrong in Warriors of the Deep. While I thought well of the Sea Devils and Silurians, the Myrka was embarrassing. I couldn't take it seriously, nor the sets that I could see could break away with no effort.
Janet Fielding (Tegan Jovanka) made a very astute point: that in the BBC, the least-watched programs had the largest budgets while the most-popular ones had the smallest. Reverse snobbery, she called it. She called it right. Time-Flight also could have been a great story if they had spent the money on it. The fact that they didn't brought the whole thing down.
Some early stories such as Four to Doomsday and the aforementioned Time-Flight were horrors, though Davison also has some of the best Doctor Who stories. Earthshock is in my opinion a brilliant piece, enhanced by a shocking end. Davison's era also ended with The Caves of Androzani, which is routinely voted as one of if not the best Doctor Who story of All Time.
It was a mixed bag, where sometimes Davison was let down by the scripts, the poor sets and effects or his eccentric producer.
Some of his early stories were hampered by JNT's odd fixation for interesting Companions, such as Turlough, a humanoid alien trying to kill the Doctor. Then there was Tegan Jovanka, a nod to the Australian fanbase who forever kept whining about wanting to get off the TARDIS. His final Companion, Peri, was a nod to the American fanbase, but she was hampered by far too much attention to her cleavage. 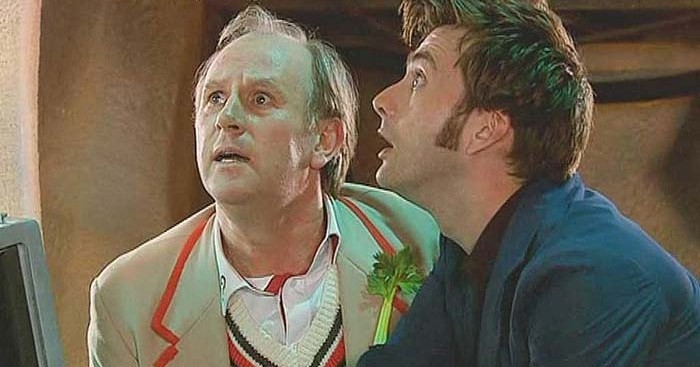 I have a special fondness for Davison's Doctor. He was my Doctor, the first one I saw when I was a child. Curiously, David Tennant's Tenth Doctor also refers to him as his Doctor in the mini-episode Time Crash, showing Tennant to not be just an actor but also a fan. Davison was the first Doctor to appear in the revived series, Eight Doctor Paul McGann making a later appearance in the mini-episode prequel to The Day of The Doctor, called originally enough The Night of The Doctor.
In retrospect, I think this bit of mini-fan service was a mistake. I get that they were acknowledging the connection between the past and present, but now it rings hollow, excessive, not to my liking. Something about it just doesn't sit well with me.

That being said, I still can't disown The Fifth Doctor's tenure. As bad as some of the effects were despite the production staff's best efforts, I still have this time as a cherished childhood memory.

I want to say that the Twentieth Anniversary special The Five Doctors is the first Doctor Who story I saw, at the very least the first one I remember well enough.
From the stories currently available, I think Time-Flight is if not the worse at least the weakest, sadly brought down by lousy effects and cheap sets. I wasn't too thrilled with Black Orchid, but the one I liked the least was The Visitation. Though I liked the ending, I didn't quite follow what was going on for most of it. I might have to watch it again. I'm always willing to give things a second chance.

Stories currently available as of this writing: Four to Doomsday, The Visitation, Black Orchid, Earthshock, Time-Flight, Arc of Infinity, The Five Doctors, Resurrection of the Daleks, and The Caves of Androzani. Castrovalva is available either individually or as part of the New Beginnings box set which has The Keeper of Traken and Logopolis from the Fourth Doctor, and Warriors of the Deep is available individually or as part of the Beneath the Surface box set with Doctor Who and the Silurians and The Sea Devils from the Third Doctor. The Black Guardian Trilogy (containing Mawdryn Undead, Terminus, and Enlightenment) is scheduled for November 2009.
Next: The Sixth Doctor: An Introduction

Email ThisBlogThis!Share to TwitterShare to FacebookShare to Pinterest
Labels: 5th Doctor, Doctor Who