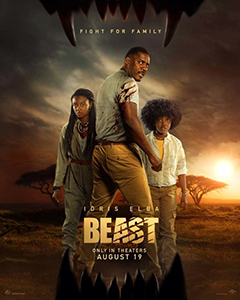 Who has not wanted to see Idris Elba punch a lion? Beast is mindless entertainment: not deep, not intelligent, not well-acted, and pretty pointless. Despite that, I did not hate Beast enough to think it a total waste of the viewer's time.

What was meant as a private tour of the preserve by Martin devolves into a fight for survival when a lion starts going on a rampage. Earlier, the lion was the sole survivor of poachers who killed off his pride. Now, he is killing everyone he can lay his claws on. Having already slaughtered a local village, the lion now targets Nate, his daughters and their guide.

In the long night and day that they endure, it becomes a game of lion-and-man, where not everyone comes out alive. 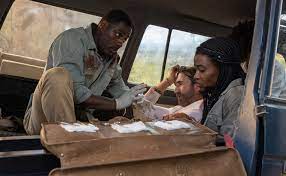 If I could say one thing about Beast, it is that it is not particularly intelligent or original. How can one believe that this random lion would not only survive a hail of bullets in the opening scene but also emerge from a vehicle that literally burst into flames? Not that the whole "Idris Elba punching a lion" bit is any more rational.

However, I think about what Beast is trying to do. It is not trying to be anything but a cliched film, where the familiar beats of "distant father bonds with distant daughters over giant animal attacking them" are hit. As such, I cannot bring myself to dislike Beast.

A plus in my acceptance of Beast is its brief running time: a mere 93 minutes. A lot of Beast is built on the idea that we need to have family drama mixed with murderous jungle cats. As such, I think we do not have to give much thought to something like Beast.

I think Idris Elba does what he can with the material. He certainly aims to make the family drama work, and I give him mad props for the effort. I also think Copley was not bothering to take any of this seriously. When he comes upon the dead villagers, he remarks, "Some of these were my friends" with such a lack of interest, he might as well have said "Some of these were pancakes".

The younger actors, like Elba, I think did their best with these thin characters. They did not leave much of an impression, but like Elba, I give them an A for effort.

Beast is pretty much a waste of time in the same way reading a magazine is. It is something to fill up the time, nothing more or less.