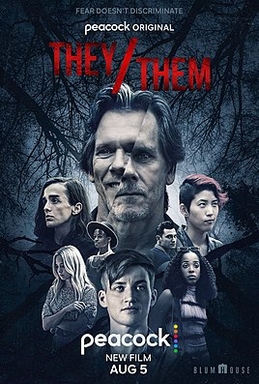 I think it fair to start my They/Them review with a confession. I have yet to see a single Friday the 13th film. Despite that, I am well enough aware of the trappings in a slasher film to know that They/Them (which I understand is meant to be pronounced as "They Slash Them") is meant to evoke a camp horror film. A slasher film that almost forgets to slash anyone, They/Them has nothing worth even the $5.40 Peacock premium subscription.

A group of campers arrive at Whistler Camp. Headed by surprisingly progressive pseudo-Christian Owen Whistler (Kevin Bacon), the campers are informed that while this may be a "gay conversion" camp, there won't be any Bible in sight and God won't be mentioned.

Our group of campers are all gay, transgender or in the case of Jordan (Theo Germaine), both trans and nonbinary. They range from the very flamboyant Toby (Austin Crute) to the jock Stuart (Cooper Koch), perhaps the closest thing They/Them has to a homo/transphobe. He does not care for the swishy nature of Toby, the pronoun they/them of Jordan or the trans Alexandra (Quei Tann), who is sent from the female to the male cabin after another camp counselor discovers Alexandra's penis.

At this point, I openly wondered that, given Alexander identifies as a female Alexadra, wouldn't Alexandra have been left in the female cabin? Not that we see the female cabin, as a lot of They/Them is where Jordan opted to stay, which is the male cabin.

As the camp counselors torture the kids psychologically and physically, we eventually find that there is a killer stalking the camp. Who the killer is and why only the straight-acting counselors or their fake camper sent out to seduce other campers are killed is eventually revealed. 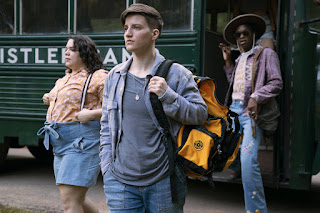 They/Them has been praised for only one thing: having "representation" with the cast and characters. To my mind, it does no one any good to have "representation" without giving the various actors anything to work with. Writer John Logan (here making his directorial debut) has a long track record of excellent screenwriting: three Oscar nominations in Original Screenplay (Gladiator and The Aviator) and Adapted (Hugo). He's also written several successful plays and television work, so why did They/Them flounder?

It could be that Logan was more focused on sending a message than on telling a story. They/Them, for all the trappings of a teen camp murder film, pretty much forgets that there is a killer allegedly stalking the camp. Instead, after opening the film with a killing (which is never mentioned by anyone), most of They/Them involves the lives of our various campers. If one had come in late, one would not have thought They/Them was about a killer in the woods. He/she would have thought it was close to a CW teen drama about LGBTQ kids.

We see how awful the counselors are, sometimes psychologically torturing them by pushing the boys to kill a dog. Other times, they openly hit on them, such as when a female counselor attempts to seduce Kim (Anna Lore), who is the most openly feminine of the lesbians, down to enjoying baking pies.

It is curious that for all the praise They/Them has received for its cast of openly gay/trans actors, their characters are shockingly one-note. Their whole persona can be reduced to one or two words: flamboyant (Toby), jerk jock (Stu), angry (Monique Kim's Veronica). These are not characters but types, and it is irrelevant if an openly gay cast and crew created these characters that trade in simple stereotypes. 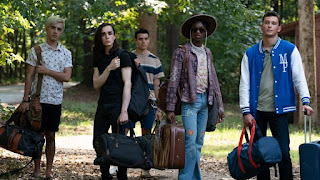 Worse, again for all the trappings They/Them envelops itself in, none of the kids are in any danger. Instead, once we remember we have a killer on the loose, said killer never targets the kids, even after they have sex. I admit this is a bit of speculation, but I suspect Logan was exercising some personal demons in They/Them given that the only people he opted to kill were the adults who either were overtly creepy straight men or any gay characters who "collaborated" against their fellow LGBTQ members.

Once we find out who the killer is and the motives, it will elicit one of two reactions: eyerolls or laughter. Both will be from the performance of the killer (a hint: it is probably the only name performer not named Kevin Bacon) which is close to so unhinged that it almost comes across as funny. The killer, in a strange turn, also trades in a stereotype of sorts: the murderous lesbian.

There are no performances here. Germaine, ostensibly the lead, has nothing to suggest that Jordan will be a leader. Jordan has suspicions that sound curious, such as when Jordan says that Whistler Camp is strange because there is no Bible-thumbing or queer bashing. I thought well of Koch as the not-quite closeted Stu only in that his character was not a gay stereotype. Oddly, he was a straight stereotype: that of the obnoxious jock who does not care for gay people.

However, the alleged Stu/Toby romance was completely unbelievable. Toby mentions that they are "practically engaged" but we never see them interact much. Moreover, the few times they do, it almost appears that Stu has contempt for Toby's fabulousness versus any sexual let alone romantic interest. 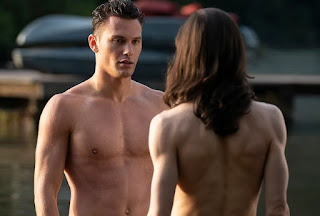 That was nothing, though, compared to what is the nadir of They/Them: when the campers join in a performance of Pink's F**kin' Perfect, a song which I confess not knowing. This sequence, where the various campers join in some impromptu musical number, seems to come from Glee than from a Friday the 13th inspired film. Even the target audience appears to think this moment is groan-inducing versus empowering.

Bacon plays the character as if we all should know he is malevolent, but not as over the top as Boone Platt's Zane, the excessively macho counselor who needs thirst pictures of twinks to get excited for sex with his female fiancée (who herself needs pictures of cute girls to get excited too).

My colleague at Society Reviews believes They/Them could not kill off the campers because it would be accused of homophobia and/or transphobia. I am not sold on that, but I do wonder if They/Them could have placed the kids in danger, or at least made them aware of any danger. As they did not know there was a crazed killer out there until almost the very end, there are no stakes for them.

They/Them may congratulate itself on having more LGBTQ characters and cast/crew than other films. That, however, does not excuse anyone from making a bad film. I think all pronouns would look at They/Them and think it is not worth the time or the $5.40 to see it.