The Adventures of Huckleberry Finn (1939): A Review 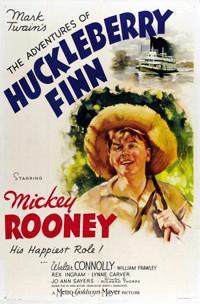 THE ADVENTURES OF HUCKLEBERRY FINN (1939)

This review is part of the Summer Under the Stars Blogathon. Today's star is Mickey Rooney.

I think many people who may not have read The Adventures of Huckleberry Finn as a sweet kids' story about frolics along the Mississippi. As such, the film version of the Mark Twain classic keeps to a mostly harmless adaptation, though to its credit it does touch on some of the darker elements in the novel.

Young Huckleberry Finn (Mickey Rooney) plays hooky from school and smokes a pipe, but despite those flaws at heart he is a good kid. The Widow Douglas (Elizabeth Rinson) thinks so, though she is not blind to Huck's flaws.

A flaw she and her sister Miss Watson (Clara Blandick) apparently don't see in themselves is the owning of a slave, Jim (Rex Ingram). He is saving enough to buy his freedom, but Huck's father Pap (Victor Kilian) may be the cause of the Widow selling Jim to get the money to pay off Pap and keep Huck with them. Huck fakes his death to escape Pap, and reluctantly joins forces with Jim to go to a free state.

As they travel downriver, Huck learns that Jim is wanted for Huck's murder and Jim learns that Pap is dead. They encounter two shysters who call themselves The Duke of Bridgewater (William Frawley) and The King of France (Walter Connolly). They rope Huck into their various schemes and scams, but Huck draws the line at their plan to grift two girls from their rightful inheritance.

Unfortunately, the Duke and the King help get Jim captured and sent back to face murder charges. Huck, by now more open to the abolitionist movement, gets help from Captain Brandy (Minor Watson) in a race to save Jim from the mob and for both of them to keep their word to Jim to get him his freedom. Will Huck make it in time to stop the lynch mob, and will Huck ever learn to wear shoes? 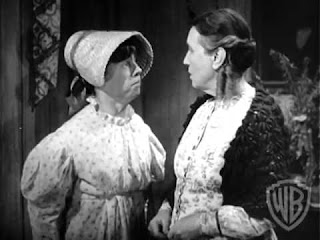 The film has not one but two scenes where Huck dresses like a girl. I do not know why screenwriter Hugo Butler or director Richard Thorpe wanted to see Mickey Rooney in drag twice, but it is one of the odder elements of the film. Granted, there are reasons why Huck is posing as a female both times, but it does not make the sight of it any less strange.

I think Mickey Rooney might have been too old for the part of the lackadaisical but good-hearted Huck, but I think he gave it as good a go as I think possible. He had those funny moments whenever attempting to play a female, but he also had a surprising maturity when he faces the quandary of helping a runaway slave. 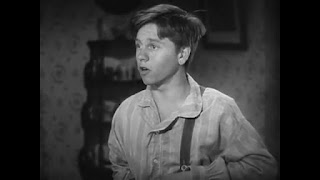 Rex Ingram was the standout as Jim. Limited by the standards of the time, having a lot of "Yessirs" and in stereotypical dialect, we do see the humanity in Jim. The longing to see his wife and son, who live in a free state. The hopes to be free, the fear and even a touch of defiance when the mob comes close to killing him. Ingram does an excellent job in the role.

Connolly and Frawley too did excellent work as the duplicitous King and Duke. They balanced the sleaziness of the King and Duke with a deft bit of comical manner. They were deliberately exaggerated when discussing their regal/aristocratic pasts, but when planning to swindle their "nieces", there was a strong current of malevolence.

Given that this Huckleberry Finn was more lighthearted than some of the source material, the tar and feathering of the King and Duke did not elicit the mix of horror and sympathy that the book did when I read that part. It was not laugh-out-loud funny, but it also was not as horrific as it could have been.

Email ThisBlogThis!Share to TwitterShare to FacebookShare to Pinterest
Labels: 1939, Literary Adaptations, Review, Summer Under the Stars