This review is for the Summer Under the Stars Blogathon. Today's star is Maureen O'Sullivan.

Long before Jane Austen became the biggest (dead) authoress in Hollywood, her work was adapted in lavish style by the most lavish of studios. Pride and Prejudice is a light, quippy film, if a bit long and with stars that might be a bit past it for plausibility.

The Bennet family is not rich but comfortable enough. Mrs. Bennet (Mary Boland) forever frets about her five daughters, aware that none will inherit the family home. Mr. Bennet (Edmund Gwenn) merely looks on with resignation and slight bemusement on the goings-on. The eldest daughter, Elizabeth or Lizzy (Greer Garson) is not opposed to marriage but is not seeking it either. Her other sisters pretty much are.

Elizabeth is closest to Jane (Maureen O'Sullivan), who is probably the beauty in the family (not that her other sisters are ugly). Jane is pretty enough for Mr. Bingley (Bruce Lester), who has recently taken possession of the nearby mansion. Accompanying him is his haughty sister (Freida Inescort) and the even haughtier Mr. Darcy (Laurence Olivier).

Elizabeth and Darcy begin their battle of wits, with the latter being proud and the former prejudiced. Elizabeth sides with poor military man Mr. Wickham (Edward Ashley) who claims to have been brought to ruin by Darcy. Wickham has been making overtures to Lydia Bennet (Ann Rutherford), who is clearly taken with any man in uniform. For her part, Elizabeth must endure and escape the attentions of her distant cousin and heir to the Bennet family home, Mr. Collins (Melville Cooper).

As loves come and go, Elizabeth and Darcy realize separately what has been clear: they are in love with each other. Ultimately, the right people find each other and more importantly, find love. 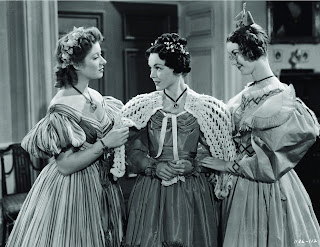 The mind boggles that Aldous Huxley, author of Brave New World, cowrote such a witty, sparkling adaptation (with Jane Murfin). Pride and Prejudice is a delight, reveling in its proper but sharp Regency comedy of manners. "Five thousand pounds and unmarried. That's the most heartening news since Waterloo", declares Mrs. Bennet when she hears how much Mr. Bingley takes in a year. After Lydia embarrasses Wickham by mentioning to Elizabeth that he is interested in her, he quips, "Someday I'll tell you what kind of creature you are".

We even get some nice subtle insults from Elizabeth to Miss Bingley. The latter is a monstrous snob, forever putting down everyone who is not a Bingley or Darcy. When she suggests that "certain women" should be more dignified by remaining silent, Lizzy retorts that if she is looking for silent figures, she should look to a mummy.

Who knew Regency era women could throw shade at each other so well?

This does not mean that Pride and Prejudice is all fluff. When the scenes call for drama, the actors are able to rise to the occasion. I think that both Greer Garson at 36 and Olivier at 33 might be a bit old to be young lovers-in-waiting. However, they are both excellent in their roles. Garson's mix of elegance and strength show Elizabeth to be competent, unafraid and caring. When escaping the ardent Mr. Collins, she is even able to have something of a chase scene. Olivier for his part makes Darcy that haughty figure, an arrogant little twit who slowly realizes Elizabeth is more than a match for him. 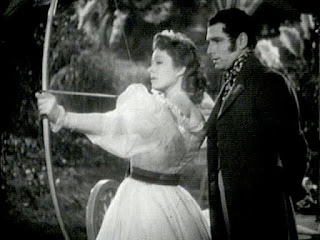 The more tender love story between Jane and Mr. Bingley is capably carried by O'Sullivan and Lester. They have a wonderful scene when Jane is forced to stay with the Bingleys after catching cold. As the pompous doctor gives her strange-sounding diagnoses, Bingley delightfully translates them to more reasonable answers. Gwenn and Boland play well off each other as Mr. and Mrs. Bennet, loving but enduring each other. Edna May Oliver's haughty Lady Catherine is comically haughty, while Cooper's besotted but idiot Mr. Collins brings a delightful pomposity to a foolish character.

Again, I would argue that Cooper was similarly too old for the role, but he too was amusing and brought life to the film.

If there are slight criticisms, they are that at nearly two hours it feels longer. I was also surprised that while the score is credited to Herbert Stothart, some of the music seems cribbed from the Ballet of the Unhatched Chickens sequence of Mussorgsky's Pictures at an Exhibition.

On the whole though, Pride and Prejudice, even with the changes to conform to the Production Code, will I think delight Jane Austen fans due to its charming leads.