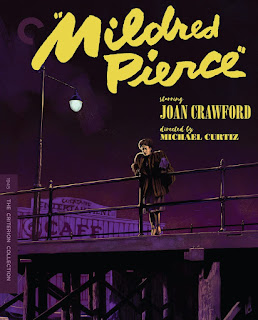 This review is part of the Summer Under the Stars Blogathon. Today's star is Jack Carson.

Mildred Pierce is the highwater mark in the career of Joan Crawford, though it also has some outstanding performances from the cast en masse. A tale of misguided maternal devotion, Mildred Pierce will both touch the viewer and warn one of the dangers of loving someone too much.

A murder has taken place in a luxurious beach house, with the victim, society vagabond Monte Baragon (Zachary Scott) uttering "Mildred".  It is not long before a whole slew of suspects starts popping up. Could it be Mildred Pierce (Joan Crawford), the victim's estranged wife? What about their business partner, Wally Fay (Jack Carson)? There's Mildred's ex-husband Bert (Bruce Bennett)? Maybe even Mildred's loyal assistant Ida (Eve Arden)?

As the police investigate whodunit, Mildred tells her story. Mildred and Bert were struggling financially, and his affair with Mrs. Biederhof (Lee Patric) did not help their marriage. Both loved their daughters Veda (Ann Blyth) and Kay (Jo Ann Marlowe), but Veda is slowly devolving into a spoiled snob.

Mildred needs a job and soon becomes a premiere waitress for Ida. With some help from her frenemy Wally, Mildred gets a property from Monte and opens a successful restaurant, though Kay dies before the restaurant opens. It is not long before Mildred and Monte begin a romance, but she is highly troubled by Veda's growing greed and snobbishness. It's gotten to where Mildred is working herself to death to keep Veda in a lifestyle that she's grown accustomed to. Veda's voracious nature ultimately leads to murder and tragedy for many. 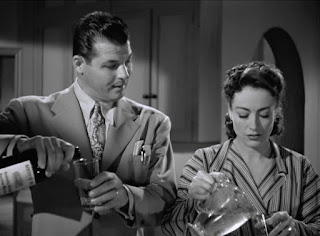 Mildred Pierce was Joan Crawford's comeback after being forced out of Metro-Goldwyn-Meyer and finding a new home at Warner Brothers. This is probably her most celebrated performance, and rightly so. Crawford embodies a mixture of strength and vulnerability, equally able to mourn her daughter and pushing away the various wolves surrounding her.

Crawford has that steely resolve whenever pushing the sleazy Wally away, but also show deep sorrow at how her love for Veda blinded her until she realized it was too late. Tough and weak, sometimes in the same scene, Crawford reveals this woman in full.

Both Ann Blyth and Eve Arden earned Oscar nominations for Supporting Actress, and each merited the nods. Blyth is the embodiment of evil as Veda, selfish, snobbish, self-absorbed. Her cruelty and manipulative nature come through in Blyth's performance. However, we do have some sympathy for her when she falls on hard times. Arden could let the quips fly, such as her remark that alligators had the right idea about eating their young. However, Arden was not quippy in the comic manner, able to play drama without losing the light touch. 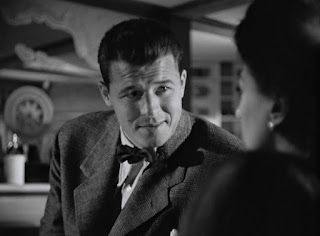 For me, the clear standout apart from Joan Crawford is Jack Carson as Wally Fay. He was primarily known for light comedies, but Mildred Pierce revealed a lesser-used ability to be strong in dramas. In turns charming and sleazy, Carson is helpful and harmful as Wally. Carson easily shifts from one moment helping Mildred finagle Monte in getting the building on the cheap to mercilessly hitting on her. He is both cruel and kind, caring and conceited. Mildred Pierce in my view is Jack Carson's finest performance, and it is a permanent puzzle as to how he did not receive a Best Supporting Actor nomination.

Mildred Pierce is another hallmark in director Michael Curtiz's career. He is masterful in using shadow and lighting to convey story. The slow revelation of who is at the beach house that fateful night is simply brilliant. Curtiz moves the story quickly and smoothly. While most of Mildred Pierce is told in flashback, it is a credit to both Curtiz and screenwriter Ranald MacDougall (adapting the James M. Cain novel) that we soon forget it is in flashback until we are jolted back to the police interview.

Mildred Pierce is a brilliant film, with excellent performances and a smooth flowing story.