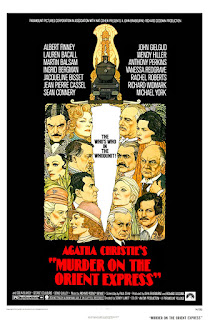 This review is part of the Summer Under the Stars Blogathon. Today's star is Jacqueline Bisset.

Murder on the Orient Express began the tradition of the all-star cast for an Agatha Christie murder mystery adaptation. Every Christie film that has followed, whether an Hercule Poirot or Miss Marple film, has maintained that tradition. Even now with the new Kenneth Branagh series of Hercule Poirot films, that tradition remains unchanged. A bit long though entertaining, Murder on the Orient Express is both intelligent and elegant.

Recalled to London for an important case, famed Belgian detective Hercule Poirot (Albert Finney) must travel immediate from Istanbul. The only way to go is via the Orient Express. However, to the surprise of both him and his friend, Orient Express director Bianchi (Martin Balsam), the train is fully booked in December. Bianchi uses his pull to get Poirot a berth and off he and the myriad of passengers go.

Wealthy American Mr. Ratchett (Richard Widmark) asks Poirot to investigate and perhaps offer protection due to a series of threatening messages. Poirot declines, but soon is drawn into things when Ratchett is murdered. With the train stranded due to the snow, Bianchi begs Poirot to solve the murder before reaching the next destination.

There are suspects galore to the case. There are Ratchett's secretary McQueen (Anthony Perkins) and valet Beddoes (John Gielgud). What about the secretly involved couple Colonel Arbuthnot (Sean Connery) and Miss Debenham (Vanessa Redgrave)? The loquacious Mrs. Hubbard (Lauren Bacall) drives everyone bonkers with her gab, but is she a murderess? Could the glamourous Hungarian Count Andrenyi (Michael York) and his more glamourous wife Helena (Jacqueline Bisset) possibly be murderers?

Even more astonishing is the possibility of exiled and elderly Russian Princess Dragomiroff (Wendy Hiller) or her German maid Hildegard Schmidt (Rachel Roberts) being the killer or killers. That is not including the devout missionary Greta Ohlsson (Ingrid Bergman) and Orient Express conductor Pierre (Jean Pierre Cassel). Throw in two passengers surprisingly out-of-place among the wealthy clientele: Foscarelli (Denis Quilley) and brash American Mr. Hardman (Colin Blakley) and it will take all of Poirot's skills to sort out the puzzle.

By asking his questions to the suspects, Poirot sees that many are trying to pull a fast one on him, and that the kidnapping and murder of the child of a wealthy pilot and his wife five years prior ties both many of the suspects and the case together. Once Poirot solves the crime, he offers two solutions to this murder, one that is true and one that is plausible. 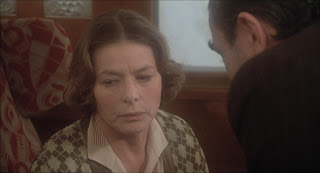 Part of the fun in a murder mystery, especially one as posh as Murder on the Orient Express, is trying to find whodunit. The film certainly gives us a lot of suspects, each apparently with a motive slowly revealed. Here, the film has hits and misses. Some characters are given lots of screentime, while others barely registered.

Ingrid Bergman won the Best Supporting Actress Oscar for her surprisingly small role of the nervous devout Swedish missionary. She has only one major scene where Poirot is asking her questions, so it is surprising that she was singled out for essentially less than fifteen minutes of screentime (and I am being generous in my estimation). Using her natural Swedish accent, Bergman is quite good as this scared, mousy figure, so at odds with her usual glamourous roles. Apart from referring to how she became a missionary to teach "little brown babies more backward than myself" (a cringe-inducing line that should have been cringe-inducing in 1974), Bergman is firing on all cylinders in her role.

It is not as though some of the other performances equaled hers. Sometimes, these all-star productions allow an actor a chance to try and camp it up, almost making the product a bit of a lark. This was the case with Hiller, who seemed to be a bit hammy as our imperial Russian princess. To be fair, the Princess Dragomiroff was meant to be rather grand, so I can excuse the grand nature of her performance. Balsam was having a ball camping it up as Bianchi, who insisted that the murderer was always the last person interviewed.

Bacall too seemed to enjoy herself as this loudmouth, brassy American. However, in the reenactment of the murder, her silent glances spoke well of her. I felt for Perkins and Gielgud, who played their typical nervous and Hobson-like roles as they did in Psycho and Arthur respectively. 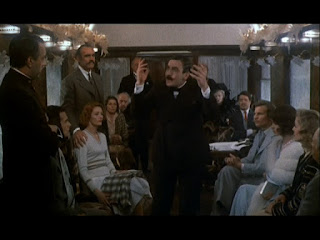 The large cast did prevent others from showing anything. Redgrave barely registered even when interrogated. The same can be said for both York and Bisset, the latter who barely spoke but who was quite beautiful. Interestingly, all three are the sole surviving cast members as of this writing.

Murder on the Orient Express is Albert Finney's movie, and he delves into the role with abandon. Veering close to over-the-top, Finney has a long monologue at the end where he reveals the facts of the case. Before the recreation of the murder begins, Finney has a seventeen-minute performance with only a couple of interruptions to his monologue. At times hammy, at times not, Finney makes for a good but not great Poirot.

Part of the fun of the murder mystery also involves the rather grand setting and elegant. Murder on the Orient Express has a lot of style to it, courtesy of the lavish costume designs and elegant score, both of which were Oscar nominated. The decor and elegant costumes and music suggest that this film is more a lark, one where we look on an elegant past than a real murder case.

If there are flaws, it is in that the film at slightly over two hours feels very long. It takes close to half an hour for the train to depart and well over 30 minutes for the corpse to be discovered. The film begins with a five-minute silent recounting of the Daisy Armstrong kidnapping and murder case, which establishes information needed for the murder case. However, a lot of time is taken up before we get rolling (no pun intended). As such, by the time we start going through the various interrogations, we are starting to feel the length.

At times, Murder on the Orient Express feels like a filmed play, but that could not be helped given how the case had to be solved.

Despite the length, Murder on the Orient Express is an elegant, well-acted film, a bit of a throwback where sophistication and death could go together.