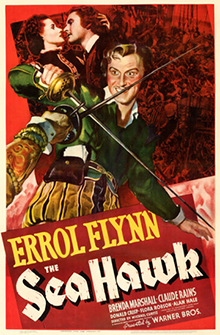 This review is part of the Summer Under the Stars Blogathon. Today's star is Gilbert Roland.

Rousing does not even begin to describe The Sea Hawk, as swashbuckling an adventure as has been made. Exciting and fast-paced despite its length, The Sea Hawk is fun and inventive, with a brilliant turn by Errol Flynn in one of his most electrifying performances.

Captain Geoffrey Thorpe (Flynn) is one of what are dubbed "sea hawks", a group of privateers who, with silent and tacit approval of Queen Elizabeth I (Flora Robson) attack Spanish ships and take their treasure, which somehow finds its way into the British coffers. His ship the Albatross has attacked the ship carrying the Spanish ambassador Don Jose de Cordova (Claude Rains) and his niece, the Dona Maria (Brenda Marshall). Captain Lopez (Gilbert Roland) is equally displeased, but there is nothing he can do about Thorpe's victory.

Cordova, secretly working with British Lord Chancellor Wolfingham (Henry Daniell), want England weak, particularly with its Navy, so that Spain's King Philip II (Montagu Love) can conquer it, and from that bring the whole world under Spanish domination. Opting not to attack Philip directly, Elizabeth says nothing when Thorpe proposes to attack the Spanish on land to take their plunder.

Unfortunately, Cordova knows of the plans to attack in Panama and sets a trap that Thorpe and his men fall into. Dona Maria was too late in trying to warn Thorpe, as the half-British Maria has fallen in love with Thorpe and vice-versa. Now condemned to a Spanish galley, Thorpe sees no way out. That is, until a British spy lets himself be captured and is made a galley slave. A coup on board brings the British back to the kingdom, and from there it is a race to inform Her Majesty of Philip's plans for his Armada. Now as Sir Geoffrey Thorpe, Gloriana declares she will build a great Navy to defend this sceptered isle. 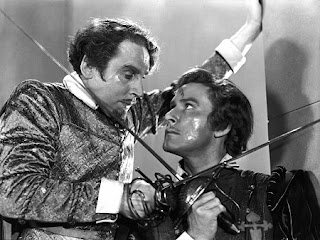 Warner Brothers could never do sumptuous in the way their rivals at MGM could. It could, however, they could do grand, which is what The Sea Hawk is. From the first notes of Erich Wolfgang Korngold's rousing score, The Sea Hawk is sweeping and epic, thrilling and romantic. It has the full intention of sweeping the viewer into action, adventure and romance, and it does so brilliantly.

I think people today simply do not appreciate Korngold's score for The Sea Hawk. A good part of the film's success lies in his music. It shifts easily from rousing and grand to surprisingly tender and romantic. It is epic and intimate, able to shift from the sea battles to a beautiful romantic scene in an English garden.

This English Garden scene is simply beautiful in every way. Director Michael Curtiz and cinematography Sol Polito capture a remarkable sequence in every way. The camera moves fluidly, and the interplay between Flynn and Marshall is beautifully acted. Here again too, Korngold's score builds on the tender and growing romance between the two adversaries.

Curtiz and Polito also do something quite extraordinary visually in The Sea Hawk. The entire Panama sequence is shot in sepia versus the lush black-and-white of the rest of the film. Not only was the transition from black-and-white to sepia so well-done one almost does not notice, but somehow the sepia works for this section of The Sea Hawk. It is almost a throwback to silent films, when changes in scenery or mood were indicated by change in color tints.

The sepia and black-and-white sections show that there was a great deal of thought into how The Sea Hawk should look. As such, I think colorization of films like The Sea Hawk is a terrible mistake. This film was made to be in black-and-white and sepia, not in color. It works fine as it is and cannot be perfected. 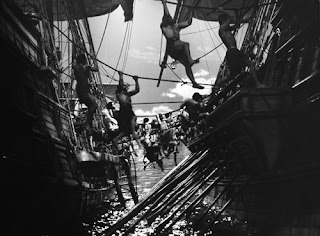 Errol Flynn is the definite swashbuckler, and The Sea Hawk is a triumph in his filmography. He handles the action sequences with wild abandon, dashing and daring when swinging across the waters to attack a ship or literally crossing swords with Her Majesty's enemies. However, we also see a playful side whenever he acts with a monkey and the romantic, swoon-worthy side when he woos the fair Dona Maria. The Sea Hawk ranks among Flynn's best performances.

Marshall was pretty and moving as Maria, who shifted in her views from hostile to helpful. Claude Rains was villainous but shrewd as Cordova, never showing his hand unless necessary. Robson, I think, seemed to make a career out of playing Good Queen Bess, and here she even allows for a bit of humor to sneak in. She uses a fan to suppress her smile to laughter when the Spanish insist on punishing Thorpe and the other privateers and especially when Thorpe's monkey doffs his cap at Her Majesty.

Daniell was a bit over-the-top as the monstrous Wolfingham, but that was the role. Roland was elegant and noble as Thorpe's adversary, with whom he had a mutual if grudging respect.

If The Sea Hawk has a flaw, it is that in many ways it plays like a remake of The Adventures of Robin Hood done two years prior. The dashing gentleman thief wins heart of noble woman who is first openly antagonistic towards him until she sees her unity in his cause, with the dashing gentleman thief facing off against enemies of The Crown. He is captured and looks like there will be no escape until fortune lets him sweep into a final battle against those who would go against England. For better or worse both The Adventures of Robin Hood and The Sea Hawk follow a similar structure.

They even have some of the same elements: Curtiz directing, Korngold writing the music, and Alan Hale as Flynn's second-in-command. Fortunately, both films work fine independent of each other despite their similarities. Moreover, The Sea Hawk works as de facto war propaganda. From Philip II's shadow falling on the map of the world with his plans for worldwide domination to Elizabeth II's rousing speech declaring she will build her Navy and defend her island against enemies of freedom, The Sea Hawk is subtle enough to be part of its own story while speaking to the then-contemporary audience.

The Sea Hawk is rousing and thrilling and tender. It is a sweeping epic that will thrill and entertain the viewer, who will scarcely notice its length.