Room at the Top: A Review 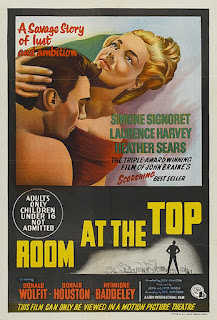 ROOM AT THE TOP

This review is part of the Summer Under the Stars Blogathon. Today's star is Laurence Harvey.

Ambition to move up in the world is a double-edged sword. To build a life better than what your parents or grandparents had is a positive. To sacrifice love, and even yourself, to reach a certain level of success is a tragedy. Room at the Top works well due to some of its performances and its story of ambition run amok.

Joe Lampton (Laurence Harvey) yearns for a life far from his humble, bitter working-class roots. Newly arrived to Warnley from Dufdon, Joe has a respectable government job. However, that won't get him to The Top, the fashionable upper-class part of town.

One person who can get him there is Susan Brown (Heather Sears), daughter of a wealthy industrialist. However, Joe faces some obstacles. There is Jack Wales (John Westbrook), Susan's haughty, wealthy fiancée. Another is Alice Aisgill (Simone Signoret), the French wife of an Englishman who like Susan, keeps herself busy by participating in local amateur theatrics.

Despite being older, Alice and Joe begin an affair. While for Alice it is love, for Joe it is more complex. He may love Alice, and even be in love with Alice. He, however, also loves Susan's position and wealth. Joe is warned against pursuing wealth over romance on all sides, but he will not be dissuaded.

One virginity taken, one unplanned pregnancy, and one car accident all clear the way for Joe Lampton to get all he wants, but he finds that it is not all roses at The Top. 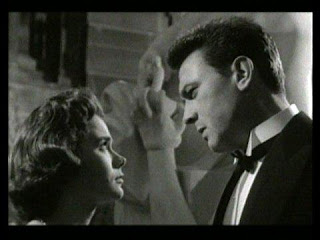 It is said that a tragedy in life is to get everything you want, and Room at the Top captures that bitter truth. Despite his outward charm and good looks, there is something dark, bitter and desperate in Joe. He is driven by a blind desire to "get ahead", but he sees too late that he does not know that there are many ways of "getting ahead".

At times, I thought Laurence Harvey was a bit over-the-top as the brittle, angry Joe, forever driven by that massive chip on his shoulder. However, there are times when Harvey shows what shaped him into being this social climber with a heart of brass only occasionally touched by genuine affection.

On a return visit that is really a set-up to get him out of the way, he goes to what was his home, which is a bombed-out ruin destroyed by the Second World War. As he looks on a child playing in what she calls "her house", Harvey's performance shows that Joe's needs to move up are not purely predatory but also about self-preservation. In his provincial manner (such as mispronouncing "brazier" as "brassier") and almost prudish working-class morality, Harvey shows Joe to be not evil, but a tragic figure.

He is outacted however by Signoret as the loved and lost Alice. In her Oscar-winning performance, Signoret shows Alice as someone who has grown to love Joe for who he is. She, however, is not ashamed or afraid of who she is. In a strong scene where she reveals she posed for an artist once, Alice is able to make a strong case that she should not be ashamed of making her own decisions, especially as she did not have sex with the artist but merely posed for him. 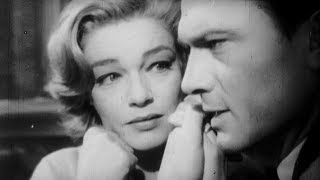 Alice is aware that Joe is driven by other needs, but she still loves the young man he can be. Signoret managed to make Alice into a strong yet vulnerable woman, humiliated by an unfaithful husband and abandoned by her lover in this foreign land. It is a strong, beautiful performance.

Hermione Baddeley earned a place in Oscar history by receiving a Supporting Actress nomination for two minutes and 19 seconds of screentime, the shortest performance ever so recognized with an acting nomination. Her performance as Elspeth, the woman whose apartment serves as Alice and Joe's love nest, is good: the mix of rage and hurt at the loss of her dear friend leaving an impression. Sears struggled at times to make the naive, lovelorn Susan into an intelligent person, but as she was a woman in love unaware of the cruelties of man, perhaps that is how it should be.

Room at the Top is a tragedy, where the protagonist learns too late that not all that glitters is gold. With strong performances and an involving story, it is worth looking into how having it all leaves you with nothing.