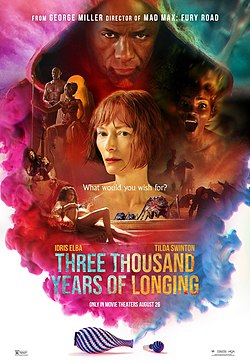 Narratologist Alithea (Tilda Swinton) is in Istanbul for a lecture on the subject of stories. Having already encountered a strange being at the airport that only she could see, another spectral vision causes her to faint. She dismisses any concern for her health, explaining that she has occasional visions she knows are fantasies.

In her hotel room, she starts to clean a bottle she purchased. From it comes the Djinn (Idris Elba), who quickly establishes this new world and asks her to speak her three wishes. Alithea, fully aware that the "three wishes" trope inevitably leads to disaster, refuses at first. However, the Djinn recounts three stories of how he came to twice be imprisoned in bottles to persuade her otherwise.

First is when he wooed the Queen of Sheba, until King Solomon used his mystical powers to entrap him. He next was freed by a young Turkish girl who wished to be loved. She soon finds herself the mistress of the heir to the Sultan's throne. Her story ends in death, as she was foolish in promoting her pregnancy while the heir was killed by a paranoid Sultan, who believed the son was plotting a coup. Finally, he encounters another Turkish woman, wise in intellect, whose paranoia about being possessed forces him back into the bottle.

Now, Alithia makes her first wish: to be loved by the Djinn. They go back to London, but modern technology overwhelms him. Her second wish is for him to speak as he starts disintegrating, and her third is for him to return to the world of the Djinn. Able to tell their story at last, she is surprised and delighted that the Djinn is able to visit her once more.

We get to see the Djinn (who as far as I remember never has an actual name) tells his various tales of woe. Some of these moments look splendid, while others might shock you. The sight of a gaggle of girthy gals with the second-in-line to the Ottoman throne as he is essentially imprisoned with them may elicit horror or chuckles.

It is hard not to laugh when one of these Rubenesque women falls and cracks the floor to reveal the Djinn. Having her name be "Sugar Lump" does not help matters.

I think a major issue in Augusta More and director George Miller's adaptation of A.S. Byatt's The Djinn in the Nightingale's Eye is how the Djinn ends up telling while Miller ends up showing. As the tone of the three separate stories were so serious, I think this method may end up alienating some viewers. You have narration in voiceover, and you have such a somber tone that it soon becomes, not exactly depressing but far more serious than perhaps it should be. 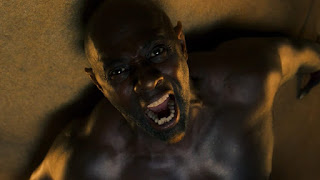 I do not fault the leads. Elba is interesting to see as the Djinn, attempting to free himself from this curse of entrapment. His hobbit-like ears are sometimes a distraction, but his performance pushes the material more than what was on the page.

He had the benefit of a character to play. Swinton was mostly reacting to the Djinn's story, and she was mostly in her bathrobe. I kept thinking that it must have been a long day of her listening to the Djinn tell his three tales of woe.

I think the selling point for Three Thousand Years of Longing were in the visuals more than in the story itself. They were not terrible, and sometimes some visuals were impressive. I was reminded of The Tree of Life, though by the time we got to some of those arresting images most audiences had checked out.

I think the same of Three Thousand Years of Longing. A bit too talky and somber, with the energy petering out once they leave Istanbul, there is a slight sluggishness that keeps me at arm's length.