This review is part of the Summer Under the Stars Blogathon. Today's star is Spencer Tracy.

Justice delayed is justice denied, so the phrase goes. Fury is a sharp condemnation of mob violence that is still relevant today, even if the love story sometimes is a bit overwrought.

Joe Wilson (Spencer Tracy) and Katherine Grant (Sylvia Sydney) are very much in love. Financially unable to marry, they opt to wait a year while both land on their feet. Katherine goes out of town to work while Joe starts at a gas station which he and his brothers turn into a success.

A year has passed, and now Joe goes to reunite with Katherine and be married at last. He brings along his devoted dog, Rainbow, but on route he is pulled over as a suspect in a kidnapping case. Katherine, unaware of the arrest, goes to their rendezvous point and waits all day. She is unaware that news has traveled fast through the town of Strand of the guilty man at the county jail.

A mob soon demands that the Sheriff turn Joe over, but despite thinking Joe may be guilty, the Sheriff refuses. The mob soon attacks the jail and chaos ensues. Katherine arrives to briefly see Joe in the jail, but the mayhem and jail bombing sends her into shock. Unbeknownst to anyone, Joe survives the blast and escapes, though poor Rainbow dies.

Now the mob is put on trial for lynching Joe, but the twenty-two defendants' fake alibis to cover up their part in the riot. Joe's brothers, first willing to go along with his plans for revenge by staying silent, soon realize that the rioters are human, frail and in some cases innocent (footage of the riot pointing out some of the guilty, some of the innocent). Eventually, a letter inadvertently reveals to Katherine that Joe's still alive. She pleads with him to reveal that he's still alive, but will he absolve the rioters or let his fury overwhelm him? 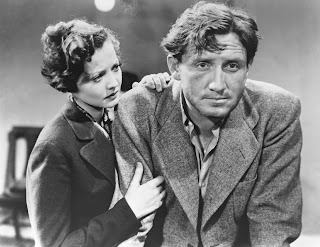 I think that Fury's major flaw, such as it is, revolves around the early scenes of Katherine and Joe's romance. Something about the way Sydney and Tracy played the romance seemed a bit too exaggerated, too overdone to be believed. It was as if they wanted to emphasize their romance so much that they went slightly overboard with it. They were so passionately in love it was almost sickening.

I also think that the lynching case would not work because there was no body. Why the defense never argued that these men and women were innocent because the prosecution could not produce a body. No corpse, no crime?

However, Fury is not about the finer points of law. Rather, it's about lawlessness, the crazed mobs that destroy not just property but lives. It has not lost that power, and director Fritz Lang manages some exceptional moments in Fury.

At the top of the list is the riot sequence, starting with the point-of-view shot of the mob as they approach the jail. As things grow into a frenzy, the tension builds into one of shock both metaphorically and literally. It isn't all doom and gloom however, as Lang inserts a quick shot of clucking chickens as the gossip about the jailed man grows.

There is even a bit of levity when Mr. Durkin (Arthur Stone), one of the tried men, is allegedly revealed to have been at the Green Light Inn the night of the riot. As he sheepishly looks at his old wife, he can only meekly shrug his shoulders at the notion of allegedly being at this house of iniquity.

Franz Waxman's score adds that touch of menace and danger to the proceedings, as the hostile crowd starts getting out of control. 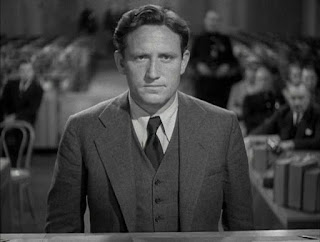 The central performances are quite good. I think Sydney was the weaker of the two, her Katherine more hemmed in by the love interest role. At times a bit too theatrical for my tastes, I think Sydney had some positive moments as well. When she pleads with Joe to admit he's alive, it is a strong piece of acting. Mostly, however, I found her a bit fluttery, her fainting at the explosion slightly funny.

Tracy too struggled at first when he was trying to get his brothers on the straight and narrow. However, I think this was due to set up the later conflict after he grows bitter over his treatment in jail. His anger and yes, fury, when he swears revenge, his delight in seeing others suffer is slightly scary. This is not the usual Tracy performance of the more genial fellow, but an embittered man. It's a well-acted role.

Fury is still relevant today. The unthinking mob violence. The havoc the actions of rioters cause on others and themselves. These are things still impacting our world today. Apart from the overplayed romance, I think Fury holds up very well.