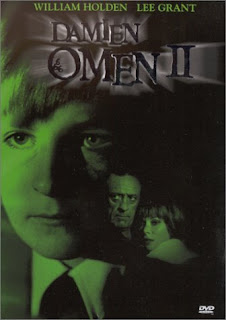 This review is part of the Summer Under the Stars Blogathon. Today's star is William Holden.

Growing up is never easy, even more so for the Son of Satan. Damien: Omen II picks up our tale of the Antichrist, still having nefarious forces helping him in the planned rise to power. Strong performances and a surprisingly logical story work for this sequel.

Seven years after the original The Omen, we find that young Damien Thorn (Jonathan Scott-Taylor) is being cared for by his wealthy industrialist uncle Richard (William Holden) and his second wife Ann (Lee Grant). Both of them love Damien as much as they do Richard's son Mark (Lucas Donat).

The Thorn boys attend a top military academy, but various friends and family think Damien is a dangerous being. Aunt Marion (Sylvia Sydney) and journalist Joan Hart (Elizabeth Shephard) meet sometimes gruesome deaths, with a raven foretelling their impending deaths. So too does Bill Atherton (Lew Ayres), the elderly Thorn Industries executive virulently opposed to plans to shift into pesticides.

Damien, however, is also helped along by various figures, such as Sergeant Neff (Lance Henriksen), who reveals to Damien his true identity. Damien is at first horrified to learn his origins, but eventually starts embracing his destiny. Anyone attempting to stop his rise meets violent ends, for Damien has many secret allies. Even those allies, including the Whore of Babylon herself, will not escape the wrath of the impending Antichrist.

Damien: Omen II does require a bit of knowledge with regards the first film. I have seen both the original and remake of The Omen, so perhaps it is difficult for me to judge whether those who do not know the story can follow Damien. However, to the film's credit at least it has a brief introduction via Leo McKern and Ian Hendry's pre-title scene which pretty much fills one in on the demonic goings-on.

Damien does not stray from the formula originated in The Omen. We have a family unit caring, even protecting Damien which continues to believe that various people who come against Damien dying in sometimes gruesome ways is plausible. We have the male (Holden) slowly coming to realize that Damien is the Antichrist and must be destroyed, but not being able to get to the necessary act in time.

We even have Jerry Goldsmith returning to score Damien. While he did not repeat his Oscar-winning score save for a brief reprise of Ave Satani at the end, the score is similar enough to stay within this universe.

Some of the performances are quite good. Jonathan Scott-Taylor is simultaneously angelic and demonic as Damien, whose lovely face can shift into pure wickedness. He does not play Damien as evil from the get-go. In fact, he recoils in horror when he learns his destiny, running from the academy after reading Scripture that suggests he is the Antichrist. However, his smirk at the deaths and injuries at the Thorn Industries lab, and the chilling conclusion of his walking away from the burning Thorn Museum, suggest that sense of evil emerging. That Scott-Taylor could suggest regret at having to kill someone he loved made Damien sympathetic, or almost so. One does not know if his scream was that of grief or part of the plan to help find the body.

Holden is strong as Richard Thorn, a man who slowly, too slowly, realizes his nephew is the literal Spawn of Satan. As a businessman with a loving family, Holden is also sympathetic and caring. His horror at the realization that Damien is responsible for various deaths, including of loved ones, is excellent. Lucas Donat as Damien's cousin Mark is also good, that of someone who has taken in his cousin as a brother to discover that there is danger behind the eyes.

Out of the main cast, I would argue that Lee Grant was the one who was slightly over-the-top in her performance, particularly at the end. However, given how things worked out perhaps I can be more forgiving of her manner. Damien was an early role for Hendricksen and Meshach Taylor, whose end was a bit funny but also gruesome. Fortunately, Damien was not as graphic in the deaths as it could have been, so it has that.

If I find fault in Damien, it is in some other performances like with Sydney and Ayres, though their roles were smaller. Damien himself did not have long to develop in his acceptance of his evil, but I put that more to Stanley Mann and Mike Hodges' screenplay (good as it was) than in the actors or Don Taylor's direction.

Damien: Omen II is the rare sequel that seems rational as opposed to superfluous or a money-grab. It is not needed, but it also does fit within what came before. There is still no sympathy for the devil, but Damien: Omen II works well both as a continuation of The Omen and as a separate film.