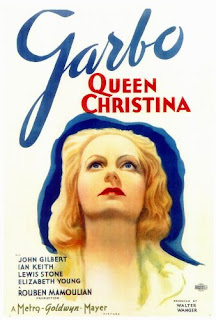 This review is part of the Summer Under the Stars Blogathon. Today's star is Greta Garbo.

Before His Majesty King Edward VIII gave up the British throne to marry a twice-divorced American woman, another monarch gave up power for love.  Three years before the world knew of the love affair between the future Duke and Duchess of Windsor, the biopic Queen Christina told the tale of the Swedish monarch whose romance with a Catholic Spaniard forced this unmerry monarch into romantic exile. At times theatrical, Queen Christina has some beautiful moments and a strong central performance.

Ascending the throne at six, Queen Christina (Greta Garbo) has carried the heavy weight of kingship, leading Sweden through the Thirty Years War. She, however, wants an end to war. She wants peace, with agreeable terms for her foes. She also wants to avoid marriage to her cousin, Prince Carl Gustav (Reginald Owen). She does not want marriage, but she is not disinterested in love.

Love comes her way when, while taking a secret sabbatical from the Palace, she encounters Spanish envoy Antonio Pimentel (John Gilbert). Antonio, unaware both that "he" is a she and that she is the Queen, first jokes then falls in love with her. She reciprocates, but their duties collide with their passions.

Count Magnus (Ian Keith) whips up the Swedish people into anti-Spanish (and anti-Catholic) frenzy as the Christina/Antonio affair becomes more open and intense. Now that Antonio has been sent back due to his original mission of arranging a marriage with the Spanish king has fallen through, Queen Christina now must decide between love and duty. She chooses the former, but at a tragic cost. 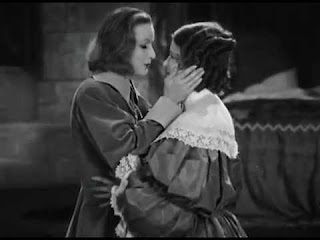 Queen Christina the film, like the final shot in it, can be read many ways. Some interpret a gay subtext, particularly due to the queen's relationship with Countess Ebba (Elizabeth Young), her pretty young courtier. The queen kisses her on the lips not once but twice (though the second kiss is obscured by Christina's hat). A pretty barmaid flirts with Christina when the latter was in drag and kept being called a boy. There is her declaration that she will not die an old maid but die "a bachelor".

Add to that the open way she is declared "King" and that how it is openly stated that she was brought up as a boy. If there is any gay coding in Queen Christina, it was barely subtle.

I would not argue for or against such an interpretation. I would make a case that Queen Christina is very daring in its portrayal of love and sex. The Innkeeper all but says he can bring a woman to keep "His Lordship" company at night. The not-married Queen and Count spend three days together, and there is a scene where we see a member of Antonio's entourage speak to him behind bed curtains, the suggestion that he and Her Majesty are sharing a bed pretty clear.

It's almost daring how Queen Christina says much by saying so little, the film making things both clear and opaque enough to read what one wants to. It is a benefit to see that we did not have to hide the Antonio/Christina romance while simultaneously not have to see everything.

The film is a showcase for Garbo both as actress and as a beauty. She and John Gilbert had been the silent era's great screen lovers, and there is a sequence where Christina wanders around the room silently, making sure to remember everything there. This is a beautiful scene done well by Garbo, where we see the luminous beauty that she was. 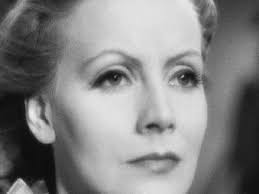 In terms of acting, Queen Christina is one of Garbo's best performances. She was able to draw on her silent film acting and use her face and eyes to express so much. As the mob stormed the palace, Christina faced them down. We see a mix of fear, anger, and contempt rolling through her without her having to say a word. When she does speak, she is capable of moving you. It would be hard not to be emotionally moved when she abdicates, her speaking and looks blending to reveal a conflicted woman.

John Gilbert has been derided for having a weak, high voice, but Queen Christina disproves that long-held myth. I was expecting something almost Mickey Mouse to emerge, but Gilbert's voice was strong. He does look better than sound better, his acting something being a bit bigger than it should be. That being said, it is sad that Gilbert did not survive the transition as Garbo did. I would put it down to style than speech: Gilbert at times acting with his face than his voice.

Nevertheless, the on-screen pairing of Gilbert and Garbo reveal some of what made them such formidable screen lovers. Their scenes were filled with humor and passion, even a bit of tenderness.

Gilbert's acting was certainly better than Lewis Stone, who did survive into sound. His performance was comically theatrical, to where one wondered if he was deliberately spoofing the script.

There were excellent touches from director Rouben Mamoulian that went beyond the directing of the actors. One particularly clever moment was when Christina had given up the crown. As she spoke to her Court, we could see the crown on the throne rise over her head, a metaphorical crown still upon her as she bids farewell.

Queen Christina is a beautifully shot film, with an excellent performance from Greta Garbo and a strong one from John Gilbert. Perhaps not as lavish as it could have been, and more than likely not historically accurate, Queen Christina still holds up well.