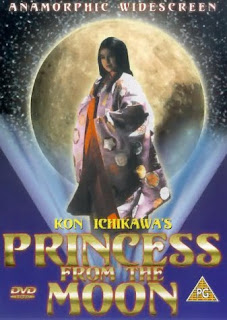 PRINCESS FROM THE MOON

This review is part of the Summer Under the Stars Blogathon. Today's star is Toshiro Mifune.

Apart from anime, I think most Americans do not think of science-fiction when it comes to Japanese cinema. Princess from the Moon, an adaptation of an ancient Japanese myth, does a good job of blending a little sci-fi into feudal Japan, even if it does at times feel like two films in one.

Mourning the death of their young daughter Kaya, woodcutter Taketori (Toshiro Mifune) comes upon a little girl that emerges out of an egg-shaped shell. His wife instantly takes the child with mysterious glowing blue eyes to be a gift from Heaven to take her daughter. Reluctantly he takes the child in as well.

Kaya grows rapidly and becomes a beautiful woman. She, however, is still something of a mystery, holding a small crystal ball and looking heavenwards. The family has grown rich thanks to the shell, which contains pure gold. Kaya's beauty becomes well-known far and wide, to eventually bring about three suitors for her hand. They are all from Court, but fearing they want her for her fortune, she gives each a seemingly impossible task to win her hand.

Each task involves a specific treasure in a far-off land. Two of the suitors have plans to essentially cheat their way to victory. One, however, lowly Councilor Otomo (Kiichi Nakai) is truly in love with her and is willing to risk everything to achieve her request. Ultimately though, Kaya finds she is being recalled by her alien people, but not before she and Otomo are reunited to declare their love. 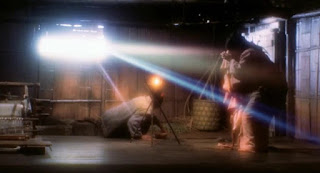 It is a bit surprising to see Toshiro Mifune, best known for strong samurai leaders, as this humble peasant. Once we focus more on the Kaya/Otomo story, he seems to pretty much disappear from Princess from the Moon altogether. However, the film is called "Princess from the Moon", so it makes sense that it would cut him down at a certain point.

Mifune is quite good in a role so unlike his usual ones. He is not as vulnerable on his grief as his wife is, but he brings a certain flummoxed nature whenever having to deal with Kaya's strange powers or her rising to womanhood. He even shows a bit of comedic sensibilities when, after unknowingly seeing Kaya suddenly grow, apologizing for "entering the wrong house".

As Princess from the Moon has Kaya grow rapidly (which curiously no one really comments on), the film turns from a "mysterious figure from another world" film to "a quest to win the heart of fair maiden" film. There is a sense of the fantastical to Princess from the Moon, where it is more fantasy than pure science fiction. Yes, we have a spaceship, which is quite impressive visually. However, when the three suitors set off on their quests, the film seems to be more a children or family film. 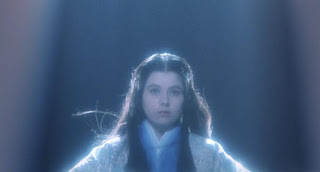 Non-Japanese might be, not puzzled but less engaged as I was. Coming five years after E.T.: The Extra-Terrestrial, there is something of an E.T. feel to the film, especially when she goes back to her people. I would also say there is something similar to Close Encounters of the Third Kind in the visuals too. Again, I am not saying Princess from the Moon is a knockoff of either. It merely evokes memories of them.

Princess from the Moon has a strong score by Kensaku Tanikawa, and I think people will be surprised to hear former Chicago frontman Peter Cetera sing the closing theme song Stay With Me, a song I had never heard but which adds to the 80s feel.

Princess from the Moon is fantasy, and while it is a bit long at a little over two hours, on the whole I think it will appeal to those who enjoy anime for its fantasy elements.