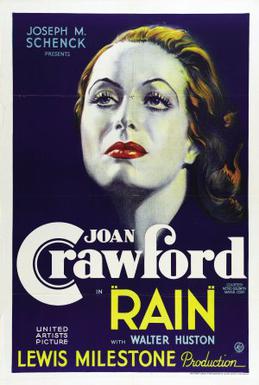 This review is part of the Summer Under the Stars Blogathon. Today's star is Joan Crawford.

Joan Crawford was set on taking on more demanding parts in her career. Rain, made outside her home of Metro-Goldwyn-Meyer, gave her a chance to dive deep into a standout performance.

Missionary couple Alfred Davidson (Walter Huston) and his wife (Beulah Bondi) are temporarily docked in Pago Pago en route to Samoa. Also aboard is Miss Sadie Thompson (Joan Crawford), a woman of ill repute. She loves jazz, liquor and men, all of which make her persona non grata to the pious Davidsons.

All find temporary lodgings at Horn's General Store, run by Joe Horn (Guy Kibbee), who is more put off by the devout Davidsons than our South Seas floozy Sadie. She finds romance with Sergeant O'Hara (William Gargan), whom she nicknames "Handsome" and does not care what kind of woman she is. Unfortunately, the Davidsons do care, enough for Alfred to report her to the governor. Davidson puts the squeeze on him to have Sadie deported back to San Francisco.

The prospect of going back to the States terrifies Sadie, but the rigid and moralistic Alfred refuses to budge or even allow her to go to Sydney instead. Despite her pleas and that of Dr. McPhail (Matt Moore), Davidson gets his way. Sadie, repentant, accepts her fate as punishment for her myriad of sins. However, even the most sinless among us can be lured to wicked intentions, leading to a shocking act. 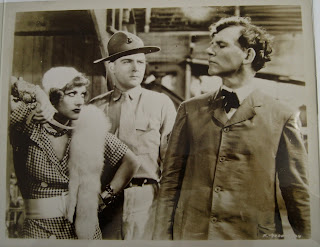 Rain is an early indication of the talent Joan Crawford had. This is an unglamorous character, a woman who has a tawdry past that she in turns embraces and attempts to run from. Our shady Sadie begins and ends by appearing in parts, bracelets jangling and enveloped in a world-weary mode. Over the course of the film, Crawford reveals the haunted, scared, even repentant woman beneath the devil-may-care attitude.

As we slowly learn about Sadie, we see how frightened she is about being forced to return to America. We see her genuine affection for Handsome and hopes to start fresh in Australia, where she can cleanse herself from her past. As she confronts the rigid, heartless Davidson, her pleas mixed with anger and condemnation (self and otherwise) make one sympathize with this hussy.

Rain is a showcase for all the actors. As the moralistic missionary who eventually succumbs to his own fleshly desires, Huston is appropriately rigid and haughty. However, he never came across as sadistic or intentionally cruel, merely wrapped up in his own righteousness. Rain also gave us a rare dramatic turn for Kibbee, who usually played daffy and endearing sugar daddies. He too was excellent as the nonjudgmental general store owner, one who straddles but is not part of either the Sadie or Davidson worlds.

Though her role is small, Bondi too did well as the equally righteous Mrs. Davidson. Her last scene though makes her sympathetic, a woman aware that her husband is also a man.

Rain has some exceptional directing from Lewis Milestone. Not only did he get excellent performances out of his cast, but he also had some visually arresting moments. Milestone's camera flowed freely while still keeping to a stage-like presentation. The use of sound is equally excellent, particularly when the native drums echo Davidson's desires.

Rain feels longer than its 90 minutes, and perhaps the symbolism is a bit overdone (such as the loud jazz music Sadie chooses to play). On the whole, however, Rain has excellent performances and a strong story. Sandwiched between the original 1928 silent version and a 1953 Technicolor version, Rain more than holds its own.