The Roman Spring of Mrs. Stone: A Review 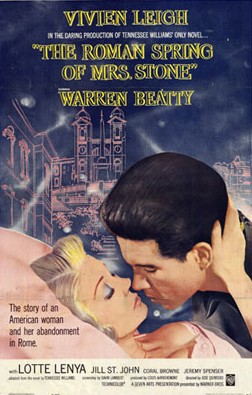 THE ROMAN SPRING OF MRS. STONE

This review is part of the Summer Under the Stars Blogathon. Today's star is Vivien Leigh.

Famed actress Karen Stone (Vivien Leigh) is now a middle-aged widow, her much older husband having died on their way to Rome. She opts to retire from the stage and live out her life among the ruins of the Eternal City, just drifting and learning to be alone.

The Contessa Magda Terribili-Gonzalez (Lotte Lenya) decides Mrs. Stone is the perfect mark on which to ply one of her stable of handsome young men who keep older women company. For this task, she selects Paolo (Warren Beatty), a talented but narcissistic gigolo. Mrs. Stone likes the company, but she at first will only dine and dance with Paolo. Mrs. Stone's best friend Meg (Coral Browne) warns her against so much as appearing in public with that pretty young thing, but she takes no heed of such talk.

It is not long, however, before the loneliness overtakes her, and they begin their affair. She does not pay him for sex but does pay for everything else. Paolo, for his part, decides to freelance and keep the Contessa out of the loop. However, it is not long before Paolo's hungry eyes turn to American starlet Barbara Bingham (Jill St. John), who is younger and moving up in the film world. Mrs. Stone finds herself now abandoned and more alone. With that, she tosses the keys to her apartment to the strange young stalker who has been pursuing her (Jeremy Spenser). She calmly waits for him to enter, a strange smile on his face as he menacingly walks in. 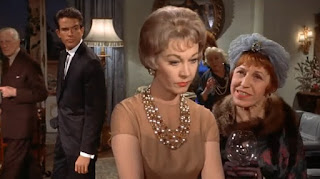 What I think dooms The Roman Spring of Mrs. Stone is that we have Vivien Leigh reuniting with Tennessee Williams material, the film based on his novella. As such, it is hard to impossible not seeing The Roman Spring of Mrs. Stone as Blanche DuBois Goes to Rome. Granted, Karen Stone isn't anywhere near as bonkers as our forever forlorn Southern belle, but there is something Blanche-like in both the character and Leigh's performance.

I perhaps should be more generous to Leigh in that Karen Stone was an actress and as such prone to more theatricality than most people. However, there seemed to me to be something rather grand, slightly operatic to Leigh's performance. I would not say it was over-the-top, but it was scratching at the ceiling. Try as I might, I could not see Karen Stone. I could see only Blanche, or rather yet a Blanche impersonation.

As often as Paolo tells Mrs. Stone that she is making a spectacle of herself, in reality it is Beatty who is making a spectacle of himself. The Roman Spring of Mrs. Stone is early in his career, but this has to be one of his worst performances. With his almost cartoonish Italian accent and poor tan, Beatty came across almost as a spoof of what an Italian gigolo would be like. I think Beatty did his best to make Paolo a harsh, even angry figure. However, I never saw the false charm that could get Mrs. Stone to melt. Beatty is openly insincere in his performance, and I think poorly cast. 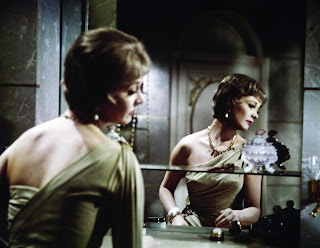 Lotte Lenya received a Best Supporting Actress Oscar nomination for her performance as the Contessa, and I give credit to her for her oily, sleazy pimp. Whenever she is on screen, we see the greedy machinations of the Contessa working through her thin veneer of respectability. Perhaps her best scene is at a party thrown for Bingham to which Karen is invited. As she attempts to plant seeds of doubt about Paolo's sincerity, we see her taking jabs at both Paolo and Karen. There is a contempt for people that Lenya plays well.

If anything brings down The Roman Spring of Mrs. Stone, it is Jose Quintero's directing. He, for example, opts to hide Beatty's face when Paolo and the Contessa first call upon Mrs. Stone. The various steps he takes to keep the audience from seeing Beatty/Paolo's face soon become farcical and forced, then worse, when we do see his face, it is not in the dramatic manner the buildup had been made to be. It just seemed to be all for naught.

We also have Gavin Lambert's adaptation of the Williams novella. The film ends on the most ambiguous close as our troubled young man enters Mrs. Stone's apartment. Earlier, Paolo tells Mrs. Stone a story of a wealthy middle-aged woman who was found murdered in her bed after letting a stranger in. As such, the film wants us to believe Mrs. Stone will be iced, which is not a particularly good way to end an already downbeat story. However, we do not know if the crazed young man will actually murder her.

Not that the option of merely raping her makes things any less palatable. I might believe that Mrs. Stone, so desperate and devastated by turning old and being abandoned by her lover, might let a strange man to come to or at her. If only Mrs. Stone hadn't been so grand in her manner.

The Roman Spring of Mrs. Stone could have been better if Vivien Leigh had toned things down and if Warren Beatty had not played Italian. However, it is not terrible, so it can be worth looking in on our doomed heroine.