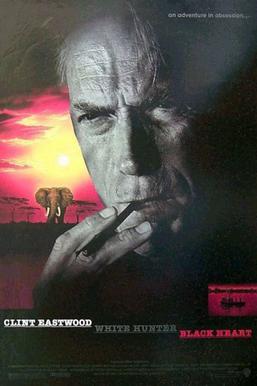 This review is part of the Summer Under the Stars Blogathon. Today's star is Clint Eastwood.

Are creative geniuses allowed leeway in how they treat others if the work is brilliant? White Hunter Black Heart looks at how one man's obsession can lead to ruin, even tragedy, for others.

Loosely based on real-life events, White Hunter Black Heart is about John Wilson (Clint Eastwood), a brilliant but arrogant film director who sees his newest project as a way to hunt big game. Cajoling his producer Paul Landers (George Dzundza) into filming on location in Africa, Wilson flies into the jungle ostensibly to begin production.

Wilson does have his qualities. He coolly insults an anti-Semitic guest at the hotel and even gets into a drunken fistfight with the hotel's owner for abusing the African workers. However, Wilson also ignores Landers and the production crew while he keeps searching for his big game. Wilson soon bonds with native tracker Kivu (Boy Mathias Chuma) despite the language barrier. As Wilson gets closer to finding his large elephant, ultimately his quest leads to tragedy. 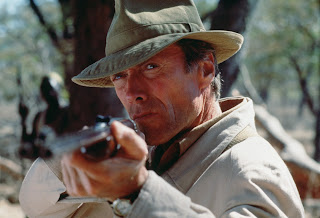 It is a bit hard to see White Hunter Black Heart without divorcing oneself from the thinly veiled story of director John Huston and the making of The African Queen. One of the more curious elements in White Hunter Black Heart is how Eastwood essentially mimicked Huston's speaking manner, so people aware of Huston would see the vague impersonation. For those unaware of Huston, I think they might be puzzled on why Eastwood is speaking in a particular, clipped manner.

On the whole though, Eastwood's performance was strong as this elegant yet obsessed figure. He shows Wilson's detached manner with nearly everyone, a man aware of his own genius, cynical but also a bit frightened. As he faces down the elephant of his dreams, we see a man who perhaps cannot complete his goal for reasons perhaps even he does not understand.

A great deal of White Hunter Black Heart is about the Wilson/Verrill relationship. It is to Fahey's credit that he never appears lost or unable to match against Eastwood or anyone else. While his confrontation against the anti-Semitic guest shows him a bit too detached in my view, I think he too gave a strong performance.

White Hunter Black Heart is in some ways sparse despite the lush Zimbabwe location. We never engage with the cast of the African film. The score, while good, is not a major part of the film.

I never saw Wilson as evil, but he certainly was not a good man. At the end though, he realizes that his obsession with one thing blinded him to not just his work but to life itself. The pursuit of his passion was a destructive one. It is curious that White Hunter Black Heart tackled, in a way, the idea of toxic masculinity before such a concept even came to be. Strong performances all around and an engaging story makes White Hunter Black Heart a firm addition to the Clint Eastwood filmography as both actor and director. It is a film that should be better known.