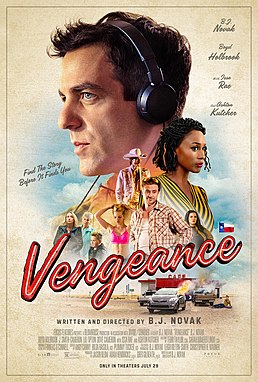 Vengeance seems a strange title for something that is mostly a fish-out-of-water comedy. While it does trade in on a few stereotypes, it is a mostly surprisingly sympathetic portrait of people I imagine its star/writer/director has mostly contempt for.

Ben Manalowitz (B.J. Novak) lives a life of loud desperation in New York City. He hooks up with a smorgasbord of beautiful women and forever is attempting to break into major league podcasting. His mentor Eloise (Issa Rae) likes an idea he's pitched, something about finding the great divide in the U.S. between Blue and Red.

Through a series of strange circumstances, the family of Abilene or Abby (Lio Tipton) believe Ben is her boyfriend. He attempts to explain she and he just hooked up a few times for meaningless sex, but Abby might have thought their fling was more than that. In any case, it is hard to deny the Shaw family when he learns that Abby died.

Off to the confines of West Texas he goes. Ben hopes that just attending her service and giving comfort to her family will be enough. Unfortunately, Abby's brother Ty (Boyd Holbrook) believes Abby was murdered and did not die of a drug overdose. Ben sees this sense of denial as the perfect way to jump into the big time of podcasting. Using the excuse of the podcast to find Abby's killer, Ben soon integrates into the Shaw family while also struggling to fit into this strange new world.

It's a world of Whataburger, of rodeos with the Confederate flag flying proudly, and of apparent cultural ignorance. However, there is more to the Shaws and the West Texas community than meets the eye. Abby's dreams of music have been apparently aided by Marfa producer Quentin Sellers (Ashton Kutcher). However, what role does the community have in Abby's death, in the world of "Afterparty", where young girls end up dead of drug overdoses? Ben, despite his softening hostility to the hicks, still does not believe it was murder, until circumstances make him change his mind. 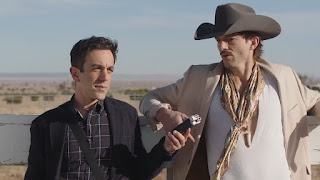 In some ways, Vengeance does indulge in Texan stereotypes of cowboys obsessed with "Mexicans" and Texas Tech football. It is a bit hard for me to look at Vengeance outside of my Texas roots. A lot of these characters somewhat resemble people I know.

As I see it, Vengeance has a slight tonal imbalance: wanting to simultaneously trade on and ridicule certain stereotypes. Holbrook's Ty is a case in point. He starts the film as something of an idiot, remarking such odd things as how Ben looks like a guy from a Liam Neeson film which he found surprisingly a downer. That Liam Neeson film? Schindler's List.

Something about that might have struck Novak as funny. "Oh look, this guy thinks Liam Neeson does or did only action films, and I look Jewish". Same for Granny (Louanne Stephens), who first comments that a problem cannot be resolved with a .45, then to run off a list of bigger guns that would.

Later on though, Novak and Ben start seeing these people as actual people, more complex and intelligent than the haughty Ben initially thought. Of particular note is Abby's sister Paris (Isabella Amara). She points out to Ben that none of the Chekov plays she knows actually feature "Chekov's gun" and starts rattling off titles. Later on, she tells him that using "y'all" is cultural appropriation. While I think Novak might have done more to show what I imagine would have been Ben's genuine shock that someone was highly educated in the boondocks west of Lubbock, it was nice to see these characters not be traditional hicks. 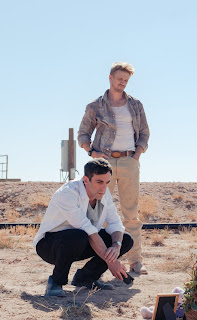 I think the performances were also a little restrained, as if wanting to appear funny but not fully selling the concept. Novak, to his credit, did not make Ben into a total sleaze given how he was using and manipulating the grieving family for his own ends. He's almost likeable. I say almost because he at times tried to force the comedy by being a bit too unresponsive to the strange goings-on around him.

Holbrook's Ty was appropriately dim and clueless, a nice good ole' boy, but I think that was the part as written. Amara to my mind was the standout as Paris, who could be as embracing of the West Texas mindset while still having a mind. The loser was Rae, who essentially was forced to act on her own. It is a terrible disservice to keep her to herself when, if she had come to Texas, she might have been better integrated into the film.

Kutcher is not an actor. He's a somewhat handsome man who has parlayed his physical appeal into a television and film career, usually playing the Ty Shaw-type roles. However, I grudgingly admit that Vengeance is probably his best performance as the seemingly wise Quentin.

There is possibility and promise in Vengeance. It is not quite there but on the whole, it is not a bad film. I do give credit where it is due, and in one element Vengeance is spot-on. Texans do have a fixation on Whataburger.