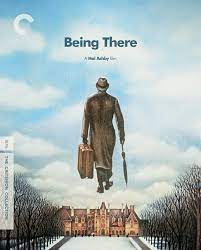 This review is part of the Summer Under the Stars Blogathon. Today's star is Peter Sellers.

The saying "it's not what you know but who you know" rings true for Being There, a strong satire on how the most banal to downright imbecilic of people can unwittingly influence the course of the nation.

Chance the gardener (Peter Sellers) has lived completely cocooned from the world. Tending only to the garden of his elderly benefactor, Chance wears the never heard from benefactor's clothes, has his meals taken care of by Louise (Ruth Attaway) and sees lots and lots of television.

One day, the benefactor dies, which does not fully register with Chance. Neither does the order for him to leave the Washington, D.C. mansion he's lived in all his life. Now out on the mean streets, dressed impeccably well and armed only with his television remote, he attempts to make sense of this brave new world.

Fortune smiles on Chance when Washington doyenne Eve Rand (Shirley MacLaine) accidently injures Chance. Mistaking his name as "Chancey Gardiner", Chance's soft musings on gardens soon are mistaken for deep insight by her and her husband Benjamin (Melvyn Douglas). The dying Benjamin has the ear of The President (Jack Warden), who too takes to the wit and wisdom of Chancey. Chance now becomes the toast of the political elite, with the oblivious Chance calmly taking it in.

Only Louise, far off in her side of town, sees how this nitwit is capable of causing chaos. Those enraptured by Chancey, however, see him ultimately as a potential President. On goes Chance, hither and yon, so oblivious to everything he is able to literally walk on water but unsure how he could. 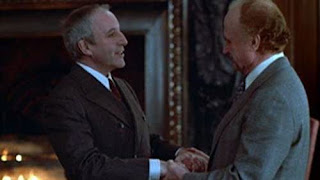 Chance says "Yes, I understand" often in Being There, but it is clear he does not. He understands as much as he is able to, but his understanding of things is guileless. As such, the various ideas, motivations and plans of those around Chance simply escape him.

The closest Chance comes to actually understanding things is when he is brought to see Ben's corpse after his death. There is a little flicker of emotion that washes over Chance, the beginning of tears starting to form, a brief moment of startled reaction, until he returns to his expressionless self. He knows Ben is dead. He may even be sad about it. However, as Chance states in his resigned monotone, death is what happens to old people.

Being There is both ahead of its time and of all time. Long before the concept of "white/male privilege" became fashionable, Louise, as a black woman, is aware that too many people have turned Chance into some political oracle with nothing to justify that view save Chance's skin color and gender. As she watches the overgrown man-child that she essentially brought up speak his gibberish on national television, Louise can barely contain her rage. Declaring Chance an idiot, he bitterly remarks that it's a white man's world in America.

One could see Being There as a variation on The Emperor's New Clothes. Instead of those around the ruler telling him what he wants to hear, we have people hearing what they want to hear from someone who is unaware of how it comes across. When Chance has dinner with the Soviet ambassador, the latter believes Chancey speaks Russian and knows an old folk tale. Chance, never changing his expression but clearly confused, merely smiles. From that vague signal, the ambassador is sure he has met a kindred soul. 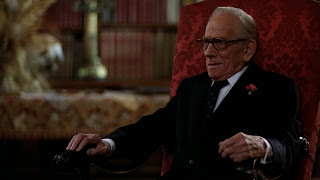 The film is exceptionally acted. Peter Sellers' Chance/Chancey is spot on. Save for the controversial credit sequence where we see him breaking character and laughing as he struggles through a scene, Sellers' performance is masterful. His Chance is blank, quiet, a total man of mystery. The proverbial innocent, Sellers never shifts in his handling of Chance. His monotone and empty eyes reveal so much of this man, who is unaware of anything outside his garden.

As Eve attempts to seduce Chancey by performing an autoerotic exercise, Sellers never reacts. While he is clearly engrossed in the television program, he never reacts to Eve making a spectacle of herself. It is his flat delivery, his kind coldness, that makes it plausible for people to think Chancey was more holy than fool.

Douglas, winning a Best Supporting Actor Oscar for his performance, is surprisingly sympathetic as Ben, the wise old man of politics taken in by Chance's oddball statements. He comes across as surprisingly kind and caring even if he is an oligarch who wields excessive power. MacLaine was equally hilarious and heartbreaking as Eve. In attempting her seduction of Chance, she was perhaps a bit over-the-top, but the situation was a bit over-the-top, so we go with that. When contemplating the death of Ben, she is moving.

Being There is in some ways, a frightening film. We see how leaders can adopt the most banal of statements as deep esoteric wisdom, ceding common sense for words that please them. A comedy with wit, it might be a bit slow for some. However, you may like to watch Being There.