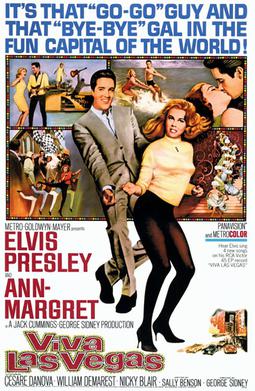 This is part of the Summer Under the Stars Blogathon. Today's star is Elvis Presley.

Even if you have never visited Las Vegas, Nevada or seen the Elvis Presley/Ann-Margret vehicle Viva Las Vegas, the images of fun and frivolity in Sin City as well as the title theme are too ingrained in American culture to be completely obscure. Viva Las Vegas is a slight film, but so joyful that you come away loving just about everything about it.

Lucky Jackson (Elvis Presley) needs a motor, fast, to be able to enter the Las Vegas Grand Prix. He comes close, but he is facing some distractions. A minor one is his rival, Count Mancini (Cesara Danova), who wants Lucky to be his driver.

A major one is Rusty Martin (Ann-Margret), the pool attendant and swimming instructor at a Las Vegas resort. She is beautiful, but she's also nobody's fool. She is put off by Lucky's swagger and tells him so. Financial mishaps force Lucky to work at the resort as a waiter, but the benefits of seeing Rusty ease the situation.

It isn't long before they fall in love, but Lucky's determination to enter the Grand Prix get in the way of Rusty's fears for his safety. Will their relationship survive the big race? 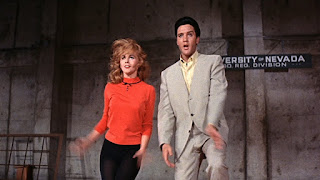 As I said, the plot of Viva Las Vegas is pretty slim. However, one does not go to Viva Las Vegas for deep explorations of Lucky's existentialist crisis. You go to see two of the most dynamic performers face off and strut their stuff.

Elvis Presley had been in film for eight years when he made Viva Las Vegas, so he knew his way around a set. While the film is not a showcase of acting prowess, we can see his star quality. I'm going to walk back a bit when it comes to Presley's acting. The montage of the Lucky/Rusty romance shows that he was more than capable in terms of performances. There is an amusing moment when he has a "shoot-out" with Rusty, showcasing a perhaps untapped ability for comedy.

When he sings the ballad, I Need Somebody to Lean On, Presley mostly walks around a nearly empty dance hall while we hear his thoughts in song. He has to act without performing, and while I would not say it was a great performance, it was an effective one.

Presley excels in the musical numbers. The title number has him at his best: hips gyrating, voice powerful, with a fierce electricity that mesmerizes. Even when performing such songs as The Eyes of Texas, Presley holds command. His performance of What'd I Say rivals the Ray Charles original for pure passion. 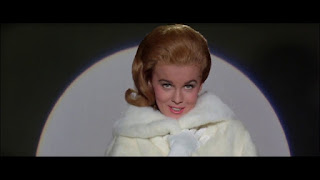 Speaking of rivals, it has been said that Ann-Margret is the only Elvis Presley costar to challenge him in terms of presence and on-screen magnetism. Having seen her performance, I can vouch that Ann-Margret not only gives Elvis a run for his money, but she might also actually have beaten him. In the aforementioned What'd I Say number, with both wearing matching yellow, her dancing all but blew his singing out of the water.

For all of Colonel Parker's faults, he at least knew enough to see that Viva Las Vegas was turning into an Ann-Margret vehicle. We see this at the conclusion, where Elvis and Ann-Margret have a split screen: him singing Viva Las Vegas and her apparently dancing to it. It is simply impossible to have one top the other, so they had to share the final shot.

Viva Las Vegas is fun, frothy and frivolous, all qualities that it shares with the city it celebrates.