Du Barry Was a Lady: A Review 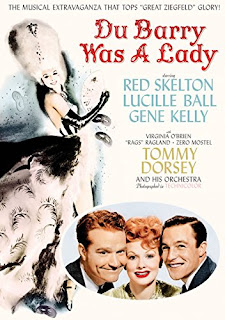 DU BARRY WAS A LADY

This is part of the Summer Under the Stars Blogathon. Today's star is Gene Kelly.

Du Barry Was a Lady lost something during its transition from stage to screen. While it has entertaining moments, there is almost a sluggish manner to what should be fast and zippy. Still, there is just barely enough to make it a nice bit of fluffy entertainment.

Humble hatcheck boy Louis Blore (Red Skelton) is madly in love with nightclub star May Daly (Lucille Ball), but she is in search of a sugar daddy to care for her. She has another man in love with her: Alec Howe (Gene Kelly), another entertainer but who like Louis is poor. May is in love with Alec, but fear of poverty gets in the way.

Fortune comes Louis' way when he wins the Irish Sweepstakes. Now with a lot of money, May reluctantly agrees to marry him, or at least consider it very carefully. Alec is not happy about that, so Louis agrees to his replacement Charlie's (Rags Ragland) plan to slip Alec a mickey. Unfortunately, Louis ends up drinking it, and he dreams he is King Louis XIV with May being Madame Du Barry, Charlie as his son and Alec as The Black Arrow, a French Robin Hood-like revolutionary.

Ultimately, once Louis returns to our world, he sees that May and Alec are meant for each other, so he gives way to their romance. Even if he did lose almost his whole fortune to taxes, they all will have Friendship. 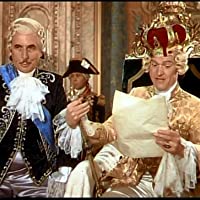 It is interesting that Du Barry Was a Lady, at least plot wise, has a similar premise to The Dueling Cavalier, the fake movie in another Gene Kelly film, Singin' in the Rain. As a side note, I still would love to see The Dueling Mammy, but I digress.

Du Barry Was a Lady is really a product of its time. The Oxford Boys quartet does a montage of then-popular singers that contemporary audiences would not recognize. Tommy Dorsey and his band too would be big names then, but not big now. Some jokes were topical, but now would require some history knowledge to get. When Louis wonders why Charlie replaced him at the hatcheck counter, Charlie replies, "You can't get hatcheck girls. They're all working at shipyards", a nod to Rosie the Riveter but which would puzzle more than a few people today.

In some ways, Du Barry Was a Lady has issues. Virginia O'Brien sings Salome in such a dull manner that she comes across as blank and emotionless. Zero Mostel as Rami the Swami is simply not funny but grating with his facial expressions and poor Charles Boyer impersonation. He seems superfluous to the plot and the longer he was off screen, the better.

However, the film also does have some positives. Lucille Ball, despite being dubbed, showed she could handle both the musical numbers and the more dramatic parts. She made the most of May, less gold-digger and more self-preserving. She knows that Louis is both too sweet to be taken advantage of and not someone she could love, and her conflict between her stated claims and her true feelings come across well. 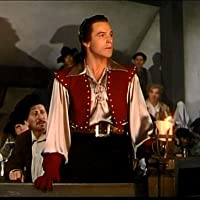 Du Barry Was a Lady was an early showcase for Kelly (his second film), and he steals the film. His dancing is wildly athletic, strong and masculine. He is not smooth in his dancing, but there is a power behind his moves that makes him mesmerizing. Du Barry Was a Lady is also the first film I have seen of Kelly where I see just how beautiful he was. He had a face that the camera loved, and it's almost startling to see how breathtaking Kelly was.

The film did allow him to show a certain range in both drama and comedy. Kelly played the young man in love well, showing both anger and pain at his initial rejection. However, once he became Black Arrow in the fantasy sequence, Kelly embraced the camp nature of the premise, almost delighting in the chance to be deliberately hammy.

It is curious that having seen two Red Skelton films (Bathing Beauty and this), I think his main appeal back in the 1940s is in how he reverses gender roles. In both films, Skelton is essentially the female: the one who is pursued but prudish about romances. He does best in the Versailles sequences, where he can be silly and befuddled. Seeing poor King Louis XIV join in a revolution against himself is funny, and him attempting to woo the luscious Madame Du Barry show that two redheads are better than one.

Du Barry Was a Lady also has a nice musical in I Love an Esquire Girl with a bevy of beauties ending with a surprise Lana Turner cameo. It is beautiful looking number but also a sign that the unexpected sight of Lana Turner dates the film.

Du Barry Was a Lady, particularly the Versailles sequence, is a farce and should be seen as one. Pleasant, inoffensive but not particularly great, it has the benefit of both Lucille Ball and Gene Kelly doing good work in a film that is not as good as it could have been.