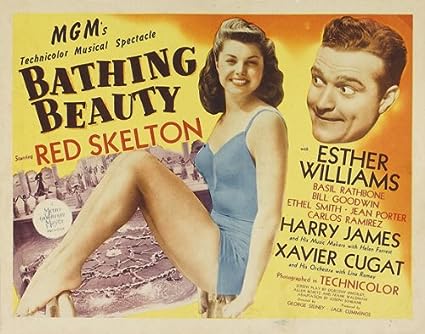 This review is part of the Summer Under the Stars Blogathon sponsored by Journeys in Classic Film and Musings of a Classic Film Addict. Today's star is Red Skelton.

Despite the film ostensibly being a Red Skelton vehicle, the title Bathing Beauty and the prominence of one star on the poster versus the minimizing of Skelton on said poster shows that Skelton ended up losing his own film, unless you think of Red Skelton as a bathing beauty.

I'm not one to judge.

Bathing Beauty has a couple of nice moments of patented Skelton comedy bits and a boatload of songs, but it's a pretty slight, thin affair whose biggest surprise comes from a most unlikely source.

On their wedding day, George arranges for singer Maria Dorango (Jacqueline Dalya) to pose as Steve's 'other' wife, down to producing three redheaded boys. Caroline flees back to her old job at Virginia College, an all-girls school.

However, the V.C. charter never specifically stated it was an all-girls' college, so Steve is reluctantly admitted on a two-week probationary period while the staff works out a way to get him expelled and Caroline waits for her annulment. Steve, however, won't be denied his great love, and with some music from his friends Xavier Cugat, Harry James along with some more hijinks, our lovers are finally reunited and Caroline stars in George's new aqua show. 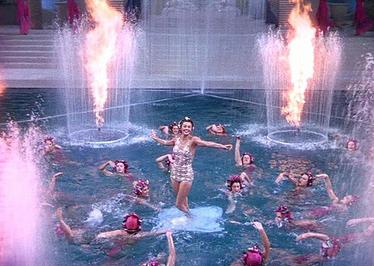 Bathing Beauty is if anything a showcase for MGM, the studio that proudly proclaimed it had 'more stars than there are in the Heavens'. It is a fascinating film when you consider how well Bathing Beauty was tailored to just about every star in the film.

The studio used not one but two musical acts: Latin bandleader Cugat and trumpeter James. Both have big musical numbers that showcase their brands of music, culminating in a lavish water ballet that features both. Neither Cugat or James could be called 'actors' in that both were rather flat in their line delivery.

Cugat was interesting in that he was the lesser of the two (his brief scene with Rathbone especially bad) but he also was firmly in on the joke. When Steve asked about his girl singer Maria, Cugat replied, "She has vanished into hot air", the mangled English played for obvious laughs. James could speak English but he also was better on the horn, his natural forte.

Bathing Beauty also gives a prime number to organist Ethel Smith, where she blared out her most memorable hit Tico Tico, as rollicking an organ solo as has been heard. Never mind that it has nothing to do with the threadbare plot or that Smith herself was not an actress and her character similarly was superfluous. The whole thing was meant as a lark.

Finally, we see how MGM built the film around another non-actress, swimmer Esther Williams. While Williams has only a surprisingly small number of water ballet moments, the closing number is as yes, a splashy and lavish a sequence as had been made involving synchronized swimming. Williams as an actress here is not particularly good but serviceable.

The big surprise in his small role is Rathbone. Best known either for villains or Sherlock Holmes, it's startling to see Rathbone in something as frothy as Bathing Beauty. However, the viewer finds that Rathbone has a surprising flair for comedy, using his distinctive voice to provide more heft to his lines. When reprimanding Steve's lack of work, Basil Rathbone tells him, "Schubert's the only guy to get away with an unfinished symphony!" His frantic delivery shows that Rathbone could play comedy well and his full potential was never used.

Though she had only one scene, it is nice to see Margaret Dumont still playing a grand dame, and in color too!

It's unfortunate then that the supposed star of Bathing Beauty is the one who fared worse. Skelton gets lost in the shuffle to promote Williams, and he seems surprisingly hesitant, perhaps even unhappy. When he does his comedy routines without Williams as a barnacle he does well. He has funny bits attempting to escape a persistent dog and doing a ballet (curiously, both numbers feature Skelton in drag). He even has a great musical number with I'll Take the High Note, his own swinging remix of Loch Lomond, complete with a kick-line! However, I found a lot of his other comedy bits rather strained.

Perhaps it should not be a surprise given it takes 38 minutes before we get a Skelton solo routine where he does his own version of a woman dressing.

It's an odd thing that he could not convince me he was madly in love with someone as beautiful as Esther Williams. I suspect that some residual antagonism at having his starring vehicle hijacked, unplanned though it might have been, that made their scenes weak.

Not that Bathing Beauty's plot helped. A subplot of a love rival with an obnoxious botany professor just disappears without reason or rhyme. Then again, something as frothy as Bathing Beauty isn't seen for a plot. It's just an excuse to string some comedy bits, musical numbers and pretty girls swimming about together.

Bathing Beauty is not a particularly great film or musical, but it has an unapologetic charm and sweetness, coupled with some good Red Skelton routines and a big aquabatic musical finale that make it a slight though pleasant diversion.