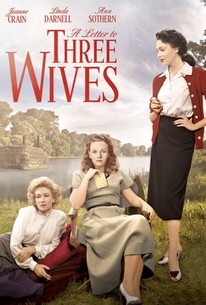 A LETTER TO THREE WIVES

This review is part of the Summer Under the Stars Blogathon sponsored by Journeys in Classic Film and Musings of a Classic Film Addict. Today's star is Ann Sothern.

A Letter to Three Wives is dated only by the fact that few people communicate via written letters sent by post. I do not see An Email to Three Wives ever being made. A Letter to Three Wives starts out slowly, almost haltingly, but once we get to the core we find such a rich and beautiful film about the struggles of womanhood, role expectations and that mysterious nature of love.

Three different women from three social levels who however still interact meet up for a daylong excursion chaperoning children on an island. Deborah Bishop (Jeanne Crain), Rita Phipps (Ann Sothern) and Lora Mae Hollingsway (Linda Darnell) get a joint message from Addie Ross (an uncredited Celeste Holm in voiceover). The letter to these three wives from their mutual frenemy tells them quite simply that Addie has run off with one of their husbands.

As they are incommunicado on this the first Saturday in May, they each reflect and remember their marriages, wondering whether its Brad Bishop (Jeffrey Lynn), George Phipps (Kirk Douglas) or Porter Hollingsway (Paul Douglas) who has absconded with the mysterious Addie.

Deborah married Brad right out of the Navy when both served in their respective naval branches. A country girl, she felt adrift in the posh surroundings of the wealthy Brad and his society friends. Insecure about herself, she feels inadequate compared to Brad and his old flame Addie.

The middle-class Rita writes radio shows and earns more than her schoolteacher husband. While she doesn't lord it over him, George still feels a bit emasculated and worse has contempt for the radio shows that appeal to lower classes.

The working-class Lora Mae not only came from the wrong side of the tracks, she lived right next to them. She married up when she got in with her hardware store king boss Porter, but they seem to always be taking shots at each other.

As the day ends, each wife learns which one will be sans husband, and those who find themselves still married discover that there is still love between man and wife. 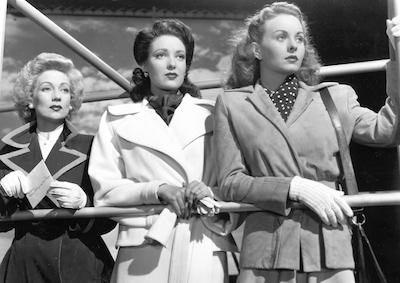 Both revolve around female friendships, a villainous femme fatate who wreaks havoc on their lives, and have multiple voiceovers. They even share a few performers (Holm and Thelma Ritter, though Holm was only in voiceover). I don't know why this detail so struck me, but it would be something worth exploring.

Mankiewicz is brilliant in how he has a very simple setup and then spins his story right from there without excessive details. In each flashback we get not just their own unique stories that led each to wonder about their marriages and their roles in them, but also strong character development. We see each of their insecurities, fears and motivations along with their distinct strengths.

They became individuals whose dilemmas we genuinely care about. He kept the mystery going right up to the end, and even with one twist proving false we got a somewhat happy ending, at least for one of the couples. We get a beautiful buildup to their crises in each section, seeing how they came to this particular point.

There are moments of comedy, such as Rita's flustered efforts to appear more elegant to her haughty sponsor and her henpecked husband. There are also moments of raw emotion as when Lora Mae and Porter finally see the truth about how they feel for each other.

What is fascinating about A Letter to Three Wives is how the flashbacks never feel forced or unnatural. In fact, I think the distortion used to modulate each of their voices as the enter or leave their memories is quite revolutionary. There's almost a musical quality to whenever they go back to the past, and it's aided by Alfred Newman's score.

Out of all the performances from the women I would say that Crain was the weakest. She seemed a bit too forced and dramatic as the insecure Deborah, sometimes slipping into almost total hysterics when a softer touch would have worked. Sothern was so excellent as Rita, who could be quite compassionate and understanding while also thoughtless, depending on who she was with. Darnell could fire off quips and looks to show disdain or cynicism, but you also saw what motivated her to crawl her way out of the slums into respectability.

With the men, Lynn probably fared the worst as Brad is probably the smallest role. Douglas wasn't as intense as he normally is but was not as strong as Sothern. Douglas had a great mix of irascibility and insecurity as the older husband to Lora Mae, but he had a wonderful moment where he let his guard down just enough to reveal the scared man behind his bluster.

I go back to the screenplay to note that Mankiewicz had a very sly manner that revealed more than what was said or scene. In one scene, Lora Mae holds off Porter's advances, closing the door that has a "We Gave" sticker prominently displayed. There's a delightful double-meaning here in that "we" (Lora Mae) didn't give despite the sign.

Earlier, the haughty radio sponsor Mrs. Manleigh (Florence Bates) starts talking about how radio commercials are 'penetrating' people like Sadie. "After penetration comes saturation", she continues, and it's a wonder the censors did not pick up on such a daring line even if it is used in an appropriate context.

In another scene, Lora Mae's mother Ruby (Connie Gilchrist) is walking in to tell her daughter she's about to leave for a New Year's Eve game. She stops in mid-sentence to see Lora Mae and Porter in a passionate embrace and when told they're getting married, Ruby completes her sentence, "Bingo!" before fainting.

Again, a double-meaning between what was said and what was implied or suggested. Even when nothing is said we can get the message. When Lora Mae sees a picture of Addie at Porter's house, she essentially tells him he won't be a mistress but instead wants to be 'the girl in the silver frame'. On the fateful night we discover who Ms. Ross went off with, we see Lora Mae's picture in a silver frame.

A Letter to Three Wives is filled with such rich and deep subtext, a credit to Joseph L. Mankiewicz's mastery of writing and directing.

I would argue that the voiceover was perhaps the worst element: Holm was a bit too haughty and early on prone to make quips. Fortunately, the voiceovers died down. Perhaps the last shot too was a bit overdone. However, A Letter to Three Wives, while dated, is still a strong film with standout performances and a story that moves one. It makes one mourn that people no longer write letters to each other.