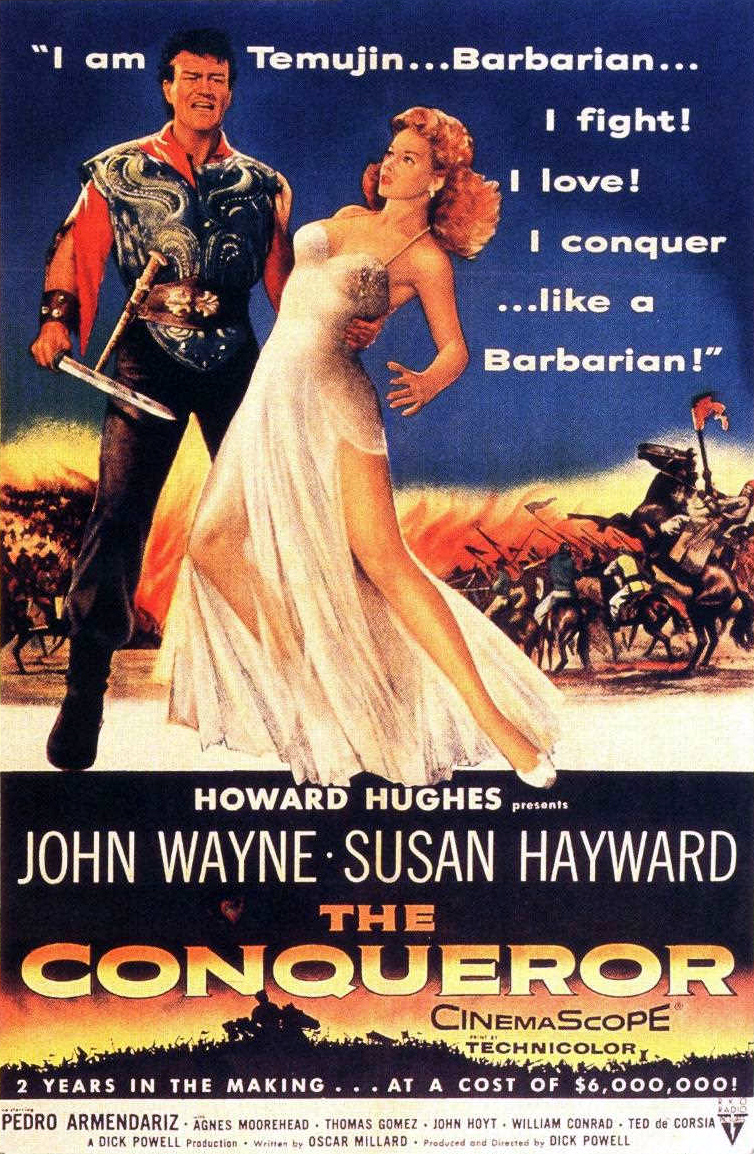 This review is part of the Summer Under the Stars Blogathon sponsored by Journeys in Classic Film and Musings of a Classic Film Addict. Today's star is Susan Hayward.

Few films have become as notorious as The Conqueror, the biopic of Genghis Khan. From the wildly miscast performers to shooting on a nuclear test site that is thought to have led to various deaths, The Conqueror became infamous for being such a disaster that its powerful yet reclusive producer Howard Hughes pulled it from circulation for decades. The Conqueror routinely finds itself listed among the worst films ever made, but does it merit said reputation?

The Conqueror is a bad film, but despite what has been said the fault does not lie in its stars alone.

Temujin (John Wayne) is a mighty Mongol warrior who comes upon the beautiful Tartar princess Bortai (Susan Hayward). Instantly in lust with her, he leads a raiding party to capture our fiery Tartar tart despite the misgivings of his brother Jamuga (Pedro Armendariz) and their mother Hunlun (Agnes Moorehead).

Bortai will not submit to Temujin, making him more desirous, but war comes first. He forms an alliance with his half-brother Wang Khan (Thomas Gomez) against the Tartars, but Temujin is betrayed. Despite this, he is still defiant and somewhere along the line Bortai has fallen in love with the Mongolian chieftain. With Temujin now having succeeded in both escaping the Tartars and taking Wang Khan's throne and his capital of Urga, he now leads one final push to begin his reign as Genghis Khan, Bortai now at his side. No one is safe in The Conqueror, as massive a misfire in the annals of cinematic history as can be found. Bless Dick Powell, former song-and-dance man turned film noir antihero, for at least having an eye for detail visually. The costumes and sets, dressed up with sand imported from their outdoor shooting location in St. George, Utah, did bring a certain authenticity to things.

One also perhaps should give grudging credit to Powell for having some good action sequences.

Apart from that, Powell's directing ranged from comical to merely inept.

You have a highly talented and skilled cast, but everyone in The Conqueror looks so hilariously bad it might have been better for them to have embraced this as so much B-movie camp.

One does not need to look further than John Wayne as the Asian warlord. One watches his performance almost in awe, amazed that Wayne or Powell thought the former (and latter to be honest) was anything other than embarrassing himself. What possessed either of them to attempt to make his eyes more 'Asian'? As if this yellowface routine wasn't already deeply disgraceful for all concerned, Wayne delivered his lines in some oddball cadence, almost as if he had discovered English.

Then again, to be fair there is probably no actor who could make Oscar Millard's screenplay sound remotely human. It's a running game to find what line is the most laughable and/or cringe-inducing. "Make haste, cretin. The Tartar wench awaits you!" would test the dramatic skills of any actor. No one will ever be able to deliver the line "You're beautiful in your wrath!" with any sense of reality.
Add clunkers like this to Wayne's speech pattern and there is no saving things. 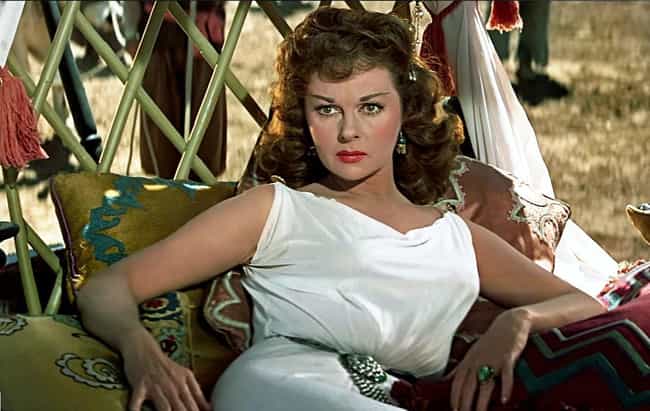 Again and again Millard's screenplay dooms every actor caught in its cross-hairs. Susan Hayward is an exceptionally talented actress, but her forte was in downtrodden women who struggled and sometimes survived. The idea of this redhead as a Tartar princess goes beyond believability, but she too is forced to utter such nonsense as "I am consumed with want of him". She apparently was directed to be a bit of a camp vamp in The Conqueror. One genuinely does not know whether she is trying to be serious or opted to go for some avant-garde gonzo acting style that tried to separate her from the film itself.

It's a sad thing when the most sensible thing Bortai does is a danse erotique at Wang Khan's palace as part of an elaborate dance number that has nothing to do with the plot but is the most entertaining part of The Conqueror. It's actually the only entertaining part if you attempt to watch it without a sense of humor about the wild goings-on. It's also Hayward's only good moment, showing she's quite able to cut a little rug before slinging swords at monarchs.

Armendariz and Moorehead too cannot escape the tawdry dialogue, though somehow the script's stubbornness in having everyone address someone as "My Brother" or "My Mother" when speaking to them as opposed to about them is enough to drive the viewer batty.

You do have to constantly suppress howls of laughter at lines like those or this one said by her father when Tamurjin swears vengeance: "Already the Mongol whelp whines!". As bad as Powell's directing is, as bad as the performances are, it's the script that is so shockingly inept and inert that you could have cast the Royal Shakespeare All-Stars and still had a disaster. 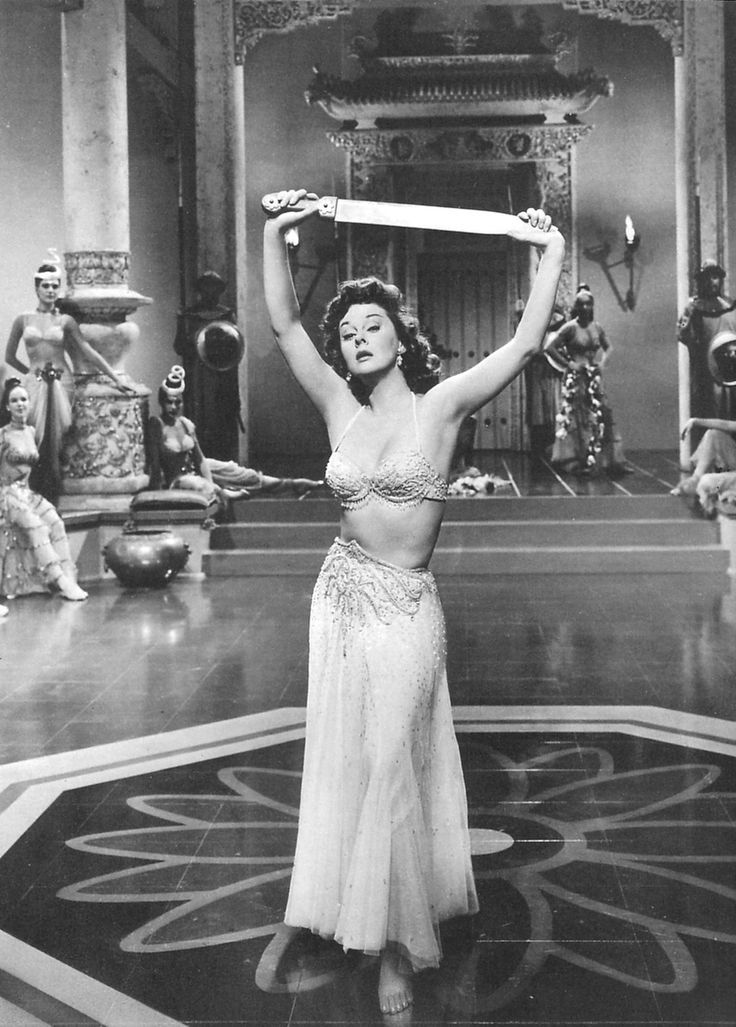 One final point on Millard's script. Either I was falling asleep or I missed something because The Conqueror never seems to establish whether Jamuga really was a traitor or just kept finding himself in the wrong place and time. More bizarrely, he serves as closing narrator despite requesting to be executed, though again it's never fully established if it was because he was a traitor or just perceived as one.

If there is anything good in The Conqueror, it is Victor Young's score. I think Young is vastly underappreciated compared to a Franz Waxman, Max Steiner, Bernard Herrmann, Alex North or John Williams. It's a terrible shame since The Conqueror's score is quite good. Its Love Theme is beautiful and the music for the big dance numbers is quite impressive.

As this is a film review, the stories of how The Conqueror led to various cast and crew deaths due to shooting downwind from a nuclear test site is not relevant. However, the various deaths from a host of cancers that claimed many lives takes away from whatever camp pleasure one gets from the film; of the many cast and crew members  Powell, Wayne, Hayward, Moorehead, John Hoyt (who played a Shaman and imperial adviser) and Armendariz (who committed suicide when he learned his cancer was terminal) succumbed to cancer which may have been triggered by the location shooting taking place so close to a nuclear fallout site. And those are the well-known victims.

Divorced from the tragedies that potentially claimed lives, The Conqueror would be remembered as a disaster in and of itself. Its cast had no chance with such a leaden script, but the performances did not help in making it any better. In so many ways, The Conqueror is a bad Wrath of Khan.