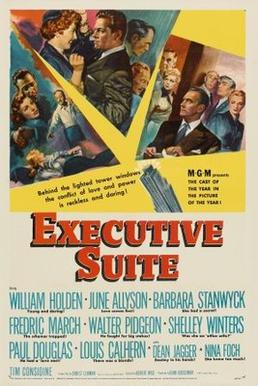 This review is part of the Summer Under the Stars Blogathon sponsored by Journeys in Classic Film and Musings of a Classic Film Fan. Today's star is June Allyson.

An all-star cast holds court in Executive Suite, where backroom boardroom politics and machinations take center stage. Executive Suite is a well-acted, well-paced film that holds your attention to the strong finish.

Avery Bullard, president of the Treadway Furniture Company, drops dead suddenly on a Friday. His death comes just as he has called an impromptu board meeting where he will appoint an executive vice-president. However, as there is no official successor the new president will have to be elected from among the current Treadway board members.

One board member, Loren Shaw (Fredric March) sees himself as the new president. He is driven purely by numbers, charts and profit/loss margins. Other board members have their own agendas. Bullard's BFF/right-hand man Fredrick Alderson (Walter Pidgeon) has been undercut by Shaw. Shaw also finds that another board member, Walt Dudley (Paul Douglas) has been schtupping his secretary Miss Bardeman (Shelley Winters). He does not directly blackmail Dudley but Shaw does know how to apply pressure.

Another board member, Caswell (Louis Calhern) witnesses Bullard's death and sells his stock at a profit, but now finds himself figuratively and literally indebted to Shaw. Only board member/production head Don Walling (William Holden) seems immune from Shaw's power, but he has no interest in taking leadership. Don's wife Mary (Allyson) flips back and forth between urging him to take power and retreating from it.

There's a wild card in the succession crisis: Julia Treadway (Barbara Stanwyck), the founder's daughter who owns enough shares to make her the only female board member, though her mental stability and romantic past with Bullard makes her an uncertain vote. With no genuine rival to Shaw but no enthusiasm for him either, all these various elements play to see who succeeds to the presidency.

Executive Suite is a surprisingly taut tale of the wheeling-and-dealing that goes on in high finance. While it gives us characters who are mostly villains and mostly heroes, the film does not go over-the-top with either. It is filled with exceptional actors at the top of their various games, each giving very strong performances.

Shaw is a pretty reprehensible man, but he also has a cold logic to his thinking. As he sees it, his job is to increase profits and nothing more. The quality of the product, the effect to employee morale or employment, and anything close to human emotion is irrelevant to him.

Executive Suite is, as I understand it, the rare villain in Fredric March's career, and he is masterful as Shaw, forever wiping his hands when doing something shady. He is never overtly evil but it is in his cold-blooded manner, his thinking only of cost that makes him the emblem of indifferent capitalism.

Opposing him is Holden as the more idealistic and moral Walling. Holden has a bravura monologue at the end of Executive Suite, where he makes his impassioned case that business should be more than just numbers and decimals on a ledger page. It should be about pride and quality of work, about enriching people in all aspects of their lives beyond the stockholders' accounts.

Stanwyck excels at playing bonkers beautifully as Julia, troubled, suicidal, but also with a spark of hope within her. Winters' Eva, the lovelorn mistress, evolves into a woman who has the strength to end their affair, especially after Walt won't stand up to Shaw when he forces his way into Walt's love-nest. "Get yourself another aspirin tablet," she quietly and sadly tells Walt as a farewell, her acknowledging that she is nothing more than a comfort to him.

Pidgeon's moral outrage and honesty works well against Douglas' essentially decent but unfaithful and weak Walt. Calhern's sleazy Caswell, a man who keeps his own good-time girl waiting at the bar while he desperately seeks out confirmation that it was Bullard he saw drop dead also does good work. 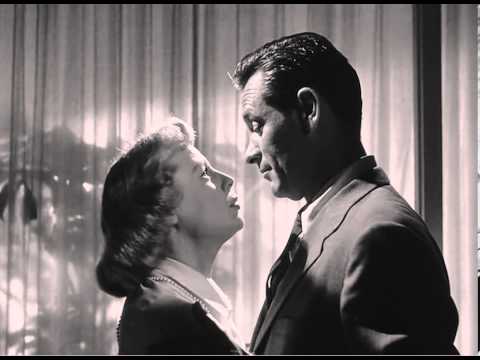 The popularity of June Allyson has always escaped me. To me she has a foghorn voice, isn't attractive and never impressed me with her acting. My only real memory of Allyson is of this raspy-voiced woman telling me to "GET BACK INTO LIFE!" with Depend adult diapers.

To my shame those commercials still send me into fits of laughter. I also can admit that perhaps Allyson was a better actress than I gave her credit for. As Mary, she is supportive but also active in shaping her husband's mindset. She even has a bit of comedy when playing catch with their son Mike (Tim Considine). Allyson may not have been my cup of tea in musicals, but stripped from any cutesy manner she manages to more than hold her own against a cavalcade of powerhouse players.

Executive Suite is still relevant about the power plays involved in high finance, and it might be worth remaking. It is a well-acted film that showcases a variety of performers very well, adeptly directed by Robert Wise with a screenplay by Ernest Lehman. The back-and-forth among those in "The Tower" makes for a strong, fascinating film.