These Three: A Review 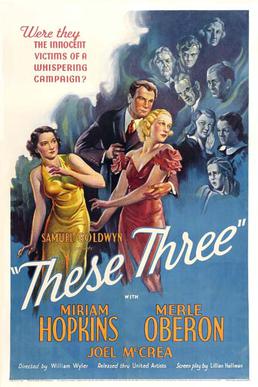 This review is part of the Summer Under the Stars Blogathon sponsored by Journeys in Classic Film and Musings of a Classic Film Addict. Today's star is Joel McRae.

In the heavily-censored world of the Hays Office, the idea of lesbianism on film was not about to happen. That would make adapting Lillian Hellman's play The Children's Hour rather problematic. A little sex-swap was needed to pass muster and make These Three, and surprisingly it holds up quite well after a bit of a lengthy start.

The Dobie-Wright School finds success, but there's a viper in their bosom. It's Mary Tilford (Bonita Granville), the Tween Bitch From Hell. Spoiled, willful and perpetual liar, Mary bullies and torments everyone. After being found in another lie, she actually fakes a heart attack and when found to be nothing she runs away to Grandmama Amelia (Alma Kruger). There, she concocts a wild story with bits of information she sees and hears from others into a lurid tale of tawdry goings-on.

Mary tells her Grandmother that Martha and Dr. Cordin (who is engaged to Karen) are themselves having an affair. The ensuing scandal, corroborated by blackmailed fellow student Rosalie Wells (Marcie May Jones) shocks everyone, especially 'these three'. A failed libel suit ruins them all, but it isn't until the exiled Aunt Lily returns and inadvertently reveals vital information that the truth is finally exposed. Martha, who finally admits that she too loves Joe, decides to go away, giving Karen and Joe a chance for happiness after he leaves to work in Vienna.

These Three reminds me of something supposedly said by Samuel Goldwyn, who produced the film. According to legend, he had wanted to film the novel The Well of Loneliness. "But it's about lesbians!" was the shocked response. "Well, we'll just make them Americans!" is his alleged reply. These Three, adapted by Hellman herself, needed to make that radical change but on the whole the film works quite well.

To both Hellman and director William Wyler's credit there is barely a hint of lurid same-sex attraction in These Three unless one really wanted to see it. Moreover, the fact that it was a heterosexual love triangle works as well without diminishing the other.

To be honest, the only genuine suggestions that Martha might have been in love with Karen versus Joe come early. "Take a chance with me," Martha says to Karen about starting their school. Perhaps I am naive but that's as close to a 'let's get it on' line that I could find.

What is really great about These Three are the performances, almost all of them top-notch. I was completely pleased with Joel McRae, who managed a fully-formed character. He was breezy and jolly, particularly when courting Karen. However, he could also deliver the dramatic goods and give a strong performance. One might be surprised to see someone as attractive as McRae demonstrate that he was a very strong dramatic actor, but These Three is an early showcase that he had a deeper range than he was given credit for.

Oberon and Hopkins too did very well as the women caught in tawdry accusations. Oberon's dramatic manner worked well for the film, as did Hopkins more hysterical manner. Doucet was appropriately wacky and insufferable as Aunt Lily, both grande and idiotic. However, it was the children who did best, none more than Bonita Granville as Mary. Granville earned a Best Supporting Actress Oscar nomination for her performance, an amazing feat given she was about twelve or thirteen. She more than earned it and made a strong case that she should have won. Her Mary is as I said the Tween Bitch From Hell: selfish, abusive and malicious with not an ounce of compassion in her. From her very first brief appearance you can see what a monster Little Mary is.

Granville does not hold back in making Mary as unsympathetic as possible. She smacks poor Rosalie left right and center, tormenting her to get her own way. Most other actresses her age would have played Mary as a spoiled brat, but Granville gives Mary an adult quality, someone unrepentant and unapologetic, determined to get her own way and stopping at nothing to do so. She is frightening and monstrous as Mary to where you want to slap her into the Ninth Circle of Hell where she belongs.

In the annals of child monsters, it is surprising that Mary Tilford in These Three is left off. The only reason she is not more hideous than The Bad Seed's Rhoda Penmark or The Omen's Damien is that Mary never actually killed anyone but you wouldn't put past her to have tried. Even Macaulay Culkin's The Good Son would be no match for Little Mary Satan. She makes the perfect bride for Rosemary's Baby.  All Hail Mary Tilford: Queen of the Damned.

Jones too is superior to the adults save perhaps McRae as Rosalie, forever crying and hysterical about being dragged into this nightmare, sympathetic and much abused.

These Three had to be 'cleaned up' from any hint of 'unnatural' sexual inclinations, but even without any gay touches it holds up extremely well. The film's only real flaw is a very slow start to where you wonder if it is going to be almost a romantic comedy. However, once Granville takes full stage as the Devil's Handmaiden the film roars to a strong conclusion.