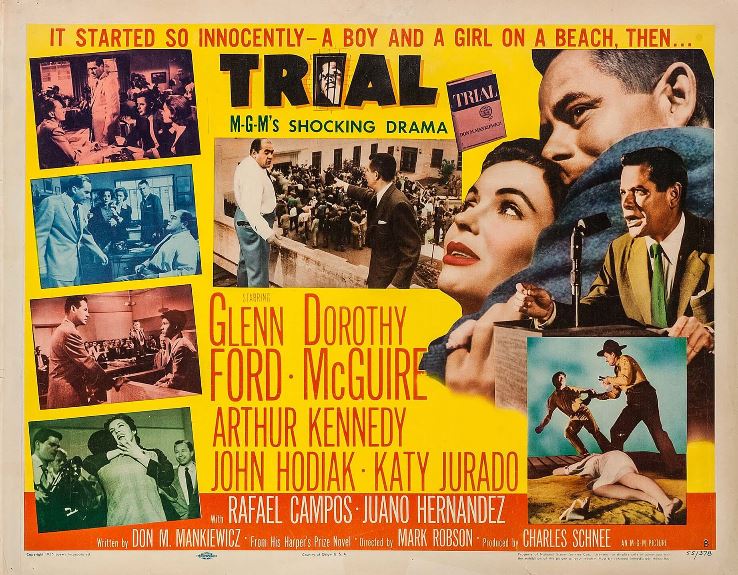 This review is part of the Summer Under the Stars Blogathon sponsored by Journeys in Classic Film and Musings of a Classic Film Addict. Today's star is Dorothy McGuire.

Trial is pretty much forgotten, perhaps with good reason. Hardly the paean to Communism that I was led to believe it was, Trial is a bit heavy-handed and at times insulting, though not without some positives.

Law professor David Blake (Glenn Ford) is dismissed from State University due to having no actual courtroom experience. Told that he will be reinstated if he gets some during the summer break, David finally finds a law firm willing to take him on. It's the practice of Barney Castle (Arthur Kennedy), and he has a big case on his hands. Mexican-American youth Angel Chavez (Rafael Campos) has been accused of murdering a pretty little Anglo girl while in fits of passion.

That's enough to set the sleepy town on fire, complete with white supremacists mobs coming close to lynching Angel. His mother Consuela (Katy Jurado) is terrified for her son's safety but trusts Barney completely. Now it's up to Blake, assisted by Barney's Girl Friday Abbie Nyle (Dorothy McGuire) to mount a defense.

David joins Barney on a fundraising event in New York City hosted by the "All People's Party", but it soon becomes clear that Barney is in cahoots with Communists and that he himself is one. Moreover, Abbie is a former fellow traveler who seems to think there's nothing wrong with Barney deliberately throwing the case to ensure Angel's conviction.

With the death sentence hovering over Angel, Blake sees that Angel will be sacrificed to be a martyr for their cause. David balks at the whole idea but he's powerless to stop this oncoming trainwreck of justice. However, David has a few tricks up his own sleeve to save Angel from being executed, if perhaps not from a conviction.

I understand that Trial may have been seen as subversive Communist propaganda in the same way as The North Star, Mission to Moscow or Tender Comrade. If that was the intention of Don Mankiewicz adapting his own novel, it's a curious way of trying to pass on Red messages given how Barney Castle came across. Rather than as some noble, non-prejudiced crusader, Castle came across as at the minimum a grifter, shameless huckster out to rob dupes blind.

The fact that he was a Communist was downplayed a bit, as if it were inconsequential to Barney's naked greed. It also leaves a bad impression that Barney was plotting to leave Angel out to dry for a greater 'cause'. None of this suggests to me that Trial was meant as pro-Commie propaganda.

Then again, the suggested 'happy ending' for Angel does not sound so happy. In fact it sounds rather condescending: the idea this "Mex" would be better off in a reform school and that he was found guilty of something he didn't do is rather horrifying to me.

As a side note, the term "Mex" is used as a slur. As someone who is of Mexican descent, I find this a rather odd slur, especially since it's one I've never heard, and I've heard quite a few.

I also found some of the performances rather broad. Ford in particular struck me as excessively jittery and mannered, though I cut him some slack given he was playing a man who was going into his first trial. He did have a good line when he says "There's a big difference between being fooled and being a fool, and I'm no fool".

McGuire was efficient and effective as the wise girl who ended up getting wise to her poor past decisions supporting Communism. She was better when she was the 'girl Friday', able to sort out David's jumbled ideas and giving him inside information than when called to play passionate.

Not for one moment did I believe these two were in love. Their romance was more out of plot necessity than something that appears to have been plausible, and neither looked romantic with each other. I found the Abbie/David romance hard to believe.

Kennedy in an Oscar-nominated performance pretty much steals Trial. His Barney is cynical, shrewd and shifty, able to suggest genuine zeal for justice while also showing how greedy and corrupt he was. As he narrates how the rally will go, he makes the line, "Every rally needs a little cheesecake" when we see a flamenco dancer on stage sound a perfect mix of cynicism and realism.

It's to where when Angel says "She wanted it" when talking about his romantic encounter with the soon-to-be-dead girl, Barney is almost justified in slapping him. He was rather fond of smacking Angel around, but then Angel was pretty fond of saying oddball things like how he and the girl were 'making love'.

One wasn't sure if Angel knew exactly what that term suggests. Jurado was a bit too dramatic as Consuela, and I could not shake the idea that Campos' accent was exaggerated to sound more foreign. Jurado does have a nice line where she complains to Barney that all the dinners she has to either attend or make the menu is always the same: tamales, frijoles (beans) chile con carne, despite the fact that she and Angel usually eat meat and potatoes.

In a small role, Juano Fernandez as the African-American judge who could not be baited or fooled more than held his own against Ford and Kennedy.

There is one aspect of Trial that did puzzle me. John Hoyt played the leader of the white supremacists named Ralph Castillo (pronounced 'Cast-till-oh'). My understanding was that "Castillo" was a Hispanic surname meaning 'Castle'. That left me rather confused.

Trial is a bit slow, a bit dull, but with some good performances from Kennedy, McGuire and Hernandez it might be worth giving it some time.