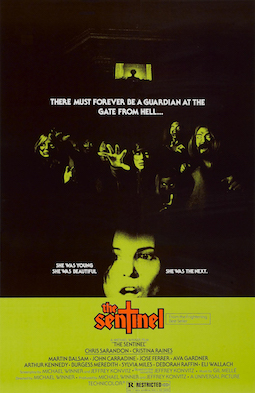 This review is part of the Summer Under the Stars Blogathon sponsored by Journeys in Classic Film and Musings of a Classic Film Addict. Today's star is Ava Gardner.

Sometimes a film is so perfect in terms of all aspects: acting, directing, story and music, that one marvels at how everything came together. The Sentinel is one such film.

Pity that by 'perfect' I mean perfectly bad.

Fashion model/TV commercial actress Alison Parker (Cristina Raines) is reluctant to move in with her lover, lawyer Michael Lerman (Chris Sarandon). She finds a great apartment in Brooklyn Heights for $400 thanks to her real estate agent Miss Logan (Ava Gardner). Apart from a blind reclusive priest she is alone according to Miss Logan.

However, Alison is anything but alone. A whole slew of oddball neighbors surround her ranging from eccentric elderly Charles Chazen (Burgess Meredith) to lesbians Gerde (Sylvia Miles) and Sandra (Beverly D'Angelo). How oddball? Sandra masturbates in front of Alison and Charles has the entire building over for his cat Jezebel's birthday party!

It isn't long before Alison soon starts getting intense headaches and falling into hysteria culminating in imagining she killed her already-dead father. There's evil at work, with only the Church to stop the danger Alison may be unwittingly a part of. Michael does his own investigating and discovers Alison is to be the next Sentinel, guarding the entry of Hell from being opened. Whether Alison wants to be turned into 'Sister Theresa' or not is irrelevant.

Things conclude with a showdown between the forces of good and evil, and with Miss Logan showing new tenants to a refashioned apartment block at 10 Montague Terrace, Brooklyn Heights, occupied by a violinist with the New York Philharmonic...and a blind reclusive nun. 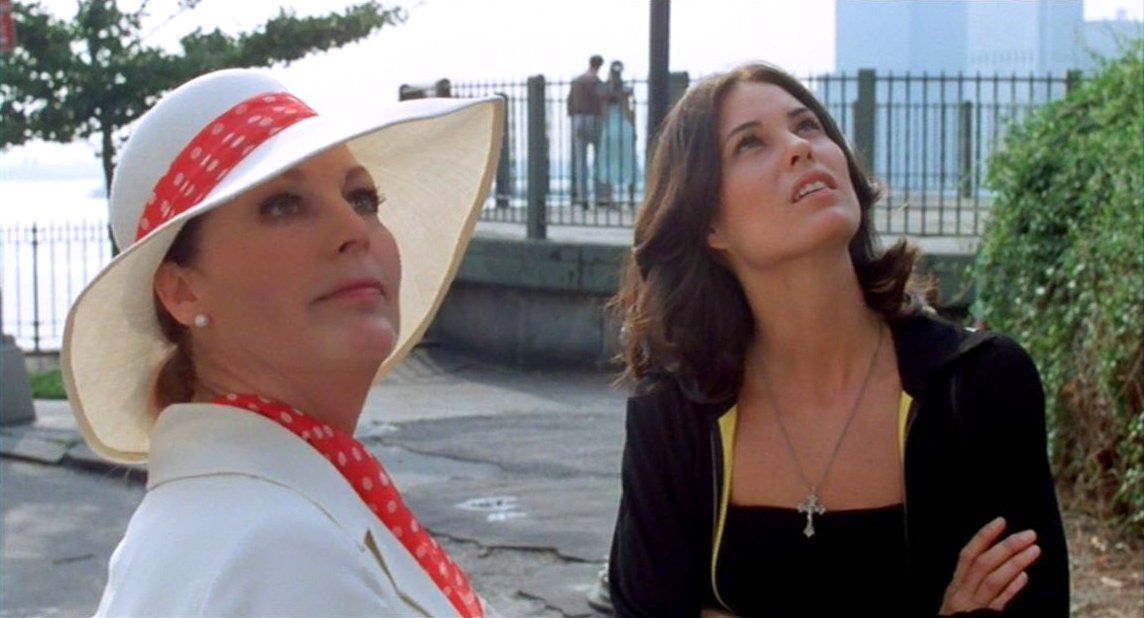 The Sentinel answers the age-old question: would you battle the demonic hordes for a $400 a month New York apartment? Even in 1977 the price is a steal. What amazes about The Sentinel is how it so openly and nakedly steals from past horror films, as if it were the love child of Rosemary's Baby and The Omen.

However, there was also a surprising amount of gruesomeness in The Sentinel at the end when we see the satanic hordes in their Freaks on Acid makeup. One wouldn't think women taking a taste of Chris Sarandon's mutilated brains would be as distasteful as all that, but there it is.

The Sentinel seems more like a cheesy TV movie than a serious effort to bring scares. It does not help matters that the film segues into some curious crime drama involving Detective Gatz (Eli Wallach) attempting to pin the 'suicide' of Lerman's wife as a murder so that Lerman can marry his mistress Alison. It would make sense if we had Law & Order Meets True Blood, but this subplot just weaves in and out sans reason. The Sentinel also has one of the nuttiest collection of stars for something this overtly schlocky. You have three Oscar winners: Jose Ferrer as "Robed Figure" (his actual screen credit), Martin Balsam as a Latin professor and Christopher Walken as Gatz's nearly mute partner (albeit Walken would win the following year). You have a future Honorary Oscar winner (Wallach) and five Oscar nominees: Gardner, Sarandon, Arthur Kennedy as the priest who knows more than he lets on, Meredith and Miles. Throw into the mix a Broadway and television star (Jerry Orbach) and an up-and-comer named Jeff Goldblum as a TV commercial director and photographer respectively.

You even have Tom Berenger pop up at the end as a future potential Sentinel!

In this embarrassment of riches you give this collection of acting greats the absolute weirdest set of roles and performances to make The Sentinel a very camp film.

Again, whether they intended to make The Sentinel into camp is up for debate.

The degree of embarrassment each of these actors shows depends on how long their screen time was and whether the need for money was obvious or not. Balsam is having a ball as the wacky Latin professor as he has only one scene. Despite their own limited screen-time both Ferrer and Kennedy appear to want to be anywhere but here. Gardner does not bother to hide her contempt for the proceedings, letting her cool Southern drawl and penchant for hats do her acting for her. She acts as if she knows her work in The Sentinel is just 'for the loot' and nothing more.

She does rattle off perhaps the best line in The Sentinel: "New Yorkers have no sense for anything other than sex or money". Ava, how nasty of you.

Only Meredith appears to think all this is a hoot and embraces the wild, whacked-out nature of The Sentinel. He's no Ruth Gordon despite being the de facto Mrs. Castavet, but he goes all-in on the crazy. Sarandon is just so disengaged with everything it becomes a guessing game as to whether he's part of the satanic goings-on or not as he plays it both ways when he bothers to act at all.

Despite it all, I found The Sentinel to be a 'so bad it's good' film, something that more people should find and show on late-night television. I can't dislike it given how much fun it is in its goofiness and unintentional hilarity. Its efforts to play serious end up making it one of the best yet unintentional horror spoofs, and I can't fault a bad film for entertaining me.