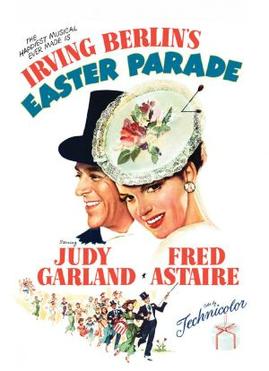 This review is part of the Summer Under the Stars Blogathon sponsored by Journeys in Classic Film and Musings of a Classic Film Addict. Today's star is Fred Astaire.

Easter Parade has a pretty unoriginal plot and is an excuse to showcase the Irving Berlin songbook. In other words, it's one of the most delightful, wonderful musicals made with brilliant dance numbers and just a lovely, lovely time.

It's Easter Sunday, and Don Hewes (Fred Astaire) is excited because he and his dancing/romantic partner Nadine Hale (Ann Miller) are about to embark on tour. Nadine, however, has other plans. She's already signed a contract for a bigger show, breaking up the act. Add to this her barely hidden designs on their mutual friend Johnny Harrow (Peter Lawford).

Hurt and upset, Don swears he can take any girl and make her an equal to greater dance partner by next Easter. The selected girl is Hannah Brown (Judy Garland), a singing waitress. She realizes who Don is but struggles to learn Don's dancing steps. It's when Don realizes he's been trying to remake Hannah in Nadine's image that he sees why they've been failing. Now adapting the routines to Hannah's strengths, they soon start succeeding.

We then get a love quadrangle when Nadine keeps going after Johnny, Johnny falls for Hannah, Hannah falls for Don and Don keeps going between Nadine and Hannah. After a few romantic misunderstandings Don and Hannah finally get together to partake in the Easter Parade. 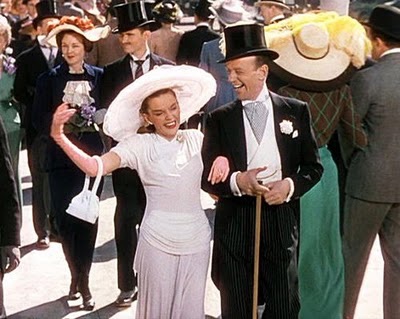 As I said, Easter Parade does not have a particularly original plot: a man remakes a woman and ends up falling in love with her. Instead, it's a way to include as many Irving Berlin songs as possible in its running time. In its first ten minutes we hear three: Happy Easter, Drum Crazy and It Only Happens When I Dance with You.

However, when you have the Irving Berlin songbook, who seriously would complain? Easter Parade has a glut of wonderful songs, all sung and/or performed so well save for perhaps one number, which I'll get back to.

The curious thing is that the film mixes musical styles. Most numbers are performed on a stage but at least four numbers (Happy Easter, Drum Crazy, A Fella with An Umbrella and Easter Parade) are performed as if the characters just decided to break out into song. Somehow the mix never impedes or feels off.

A major part of the success is in getting two of the best musical performers in film history. Easter Parade is proof that Fred Astaire was an artistic genius. One does not need to see any other Astaire film to see that he truly was one of if not the greatest dancer in film history.

When we get to Drum Crazy, you see an artist of exceptional ability and skill. His ability to integrate the drums with his dancing is simply extraordinary. One is left breathless not out of exhaustion but out of amazement at how graceful, elegant and skilled Astaire was. His movements in It Only Happens When I Dance with You show his elegance and smooth manner. Perhaps his highlight is Steppin' Out with My Baby. In this number he seems to almost make time stand still as he slows down while the other dances move at a faster pace.

While this was clearly was done with trick photography, the end results are extraordinary. It takes an extraordinary talent to come close to Astaire, but Judy Garland more than holds her own. Her only solo number is a song (I Want to Go Back to Michigan), but when paired with Astaire she was so wonderful and skilled she draws your attention to her. From the musical montage as part of their audition for Ziegfeld to their hobo number We're A Couple of Swells, Garland is such a delight and able to more than be Astaire's equal.

The We're A Couple of Swells number is so fun and cheerful you get swept up in it, finding yourself grinning ear to ear as these two 'bums' dance and sing with such glee.

Garland handled the acting as well as she handled the singing and dancing, in turns dramatic and comic (the way she 'attracts' men is delightful). Astaire too has a wonderful way of making seemingly awful things to say almost innocent. "I don't want the very best. I want you," he tells Hannah, quickly realizing how that sounds. He goes from clueless to sheepish with ease.

It's curious that Ann Miller, who has a smashing solo number in Shaking the Blues Away, was so overtly a villainous vamp that she was in sore need of a mustache to twirl. However, she is able to be as elegant as Astaire when they dance together. It wasn't the best performance but it good. As for Lawford, he was handsome but his sole musical number, A Fella with An Umbrella, left me a bit puzzled.

The song was great. His voice was not.

I could have done with the 'comedy bit' with the much-abused waiter Francois, but really apart from this Easter Parade is a sweet, charming musical filled with great musical numbers and bright colors. There is simply no way anyone would not be charmed by Easter Parade.