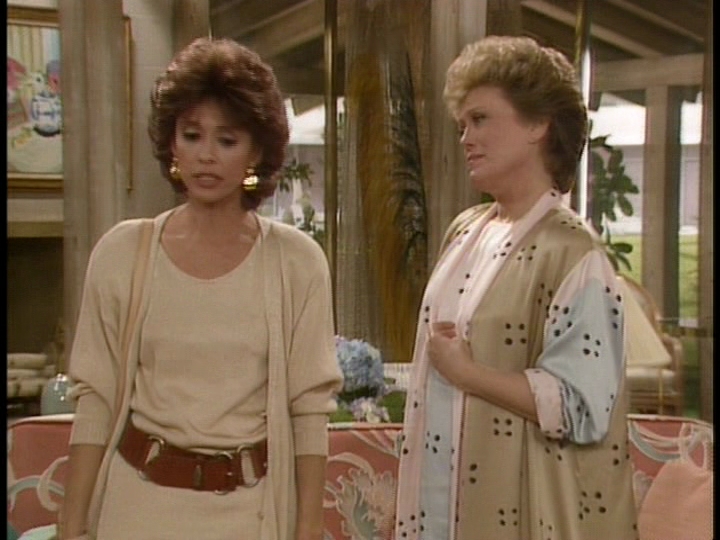 This review is part of the Summer Under the Stars Blogathon sponsored by Journeys in Classic Film and Musings of a Classic Film Addict. Today's star is Rita Moreno.

Every television series has a few clunky episodes. The Golden Girls is no exception. There's Dorothy's Prized Pupil, where Dorothy Zbornak (Bea Arthur) exercised a little white privilege by accidentally helping deport poor Mario Lopez and being surprisingly blase about it. There's The Days and Nights of Sophia Petrillo, where the title character (Estelle Getty) does nothing interesting while her cast-mates merely did nothing.

However, Season Two's Empty Nest tops them all in sheer awfulness, a woefully misguided fiasco that even guest star Rita Moreno remembers with horror. Empty Nests is the one Golden Girls episode that even its most rabid fans skip. It's wrong on so many levels I imagine a whole course could be developed around it. Empty Nests should be analyzed by prospective television writers and producers on what not to do.

The girls: Dorothy (Arthur), Blanche Deveareux (Rue McClanahan), Rose Nylund (Betty White) and Dorothy's mother Sophia (Getty) are sitting in their kitchen bemoaning that "Mr. Fix-It" has not come to fix their dishwasher. Into this comes Renee Corliss (Moreno), bemoaning herself about her husband George (Paul Dooley). Now that their daughter has gone off to college Renee's lonely and wants George to cut back on his medical practice. The girls each push her to talk to her husband.

George, however, finds himself too busy to give his lonely wife much thought. It isn't as if the Corliss home is without adventures. In comes Renee's brother Chuck (Geoffrey Lewis), who has at least three personalities: Chuck, Boris and...Mr. Fix-It. There's their obnoxious womanizing neighbor Oliver (David Leisure). Finally, comes George and Renee's daughter Jenny (Jane Harnick). She's just dropped out of Columbia because her boyfriend dumped her for another girl.

To relieve her loneliness Renee agrees to go back to New York with Jenny. George now is lonely, they two reunite and make a honeymoon around it. However, it isn't their second or third honeymoon, as Renee points out that they never had a honeymoon.

Interviewed for the Television Academy Archives about her guest appearance on The Golden Girls, Moreno pretty much winces remembering Empty Nests. She openly calls it 'a disaster' and commented that 'no one had any enthusiasm for it'.

Moreno does state that The Golden Girls producer and episode writer Susan Harris was ill during the shooting and thus unable to fix the growing problems. However, I don't think any amount of tinkering could have saved Empty Nests from being the disaster Moreno says it was.

The reasons for said unenthusiasm are clear once you sit through Empty Nests. For starters, the main cast clearly was not enjoying it as they essentially were reduced to guest stars on their own program. If you study Empty Nests you see that Blanche, Rose, Sophia and Dorothy were irrelevant to the plot.

As the actual Golden Girls weren't the focus of Empty Nests, the viewer is left with a lot of questions. First, why are our girls there? Second, who are these people we are watching? The Corliss family has never appeared on The Golden Girls and have never been mentioned, so what we are stuck with is a group of characters whom the viewer has no connection and/or interest in. The audience is forced to watch a Golden Girls episode without the actual 'golden girls'.

It just seems so irrational.

Second, the 'problems' such as they were are shockingly trivial. At one point George tells Renee "Why don't you get a job?" as an answer to her loneliness. While the phrasing is insensitive (so much so that one wonders why Renee wants to spend time with George to begin with), his point is valid. He obviously loves his career and it does seem almost selfish of her to push he essentially quit so they could have more time together. Renee could use this newfound free time to develop hobbies or interests. She speaks vaguely about 'returning to show-business' but given how often Rose and Blanche perform at community theater why can't Renee jump into Miami's theater world?

I wonder though if we had gotten that Empty Nests spin-off, would we have seen Renee as a showgirl? 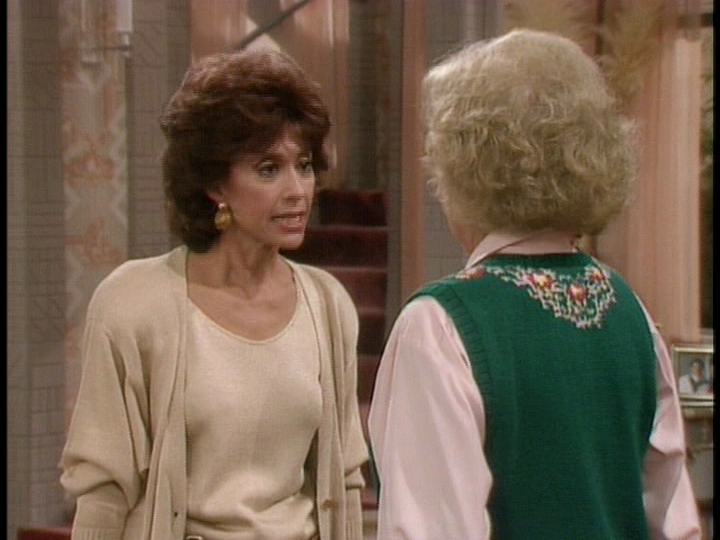 Third, we have a wildly misguided set of characters. Somehow using multiple personality disorder as a source of humor seems rather tacky even then let alone now. Couple that with that Chuck/Mr. Fix-It was not that interesting or funny (we never did see Boris). The idea that Jenny would drop out of Columbia (COLUMBIA!) because her boyfriend dumped her makes no sense on any level. Oliver popping in and out is similarly sans reason.

Going back to Chuck/Mr. Fix-It, the whole set up is bad. First, why would the girls, especially Dorothy, feel fine about exploiting someone's mental health for their own benefit? Second, why not pay for a repairman to come actually fix the dishwasher? Were they all in agreement that they'd wait out the time until a mentally unbalanced person switched into a cuddly offbeat Maytag repairman?

Watching Empty Nests now, you feel genuinely sorry for the actors trying their hardest to sell this product. Moreno looked confused and uneasy, struggling to make Renee's 'dilemma' interesting. Leisure too has no real motivation for Oliver, almost as if told the character was sleazy and take it from there. Lewis' multiple personality character was probably the worst, indicating his shifting personas merely by altering his voice.

Dooley is the one that came off best due to George having at least a life outside his house. It wasn't the best but it was better than nothing.

Empty Nests was a backdoor pilot for a potential spin-off, but it was a terrible decision to throw all these characters at us all at once. After seeing the end result flopping so spectacularly, the producers went back to the drawing board and fortunately learned from their mistakes. They retooled the premise to eventually create an actual spin-off that worked: Empty Nest starring Richard Mulligan as the girls' next-door neighbor, Dr. Harry Weston.

Empty Nests is a cringe-inducing horror: badly acted even by talented performers like the main cast, Moreno and Dooley, with no real plot and even less enthusiasm. It is so bad that when reruns are shown, a lot of material is cut. I would be surprised if we got more than 15 minutes of the episode when shown today.

One last thing about Empty Nests. It is one thing to have this be a backdoor pilot, already a bad idea given the episode itself wasn't funny and wasted everyone's time. It is another to make Empty Nests the season finale! That spot should be reserved for the actual show to either wrap up or introduce new stories for them, not for total strangers. It was a terrible mistake to make Empty Nests the season finale, but given how the entire episode was a series of terrible mistakes, it was to be expected.

Next Episode: Old Friends
Posted by Rick at 5:06 AM