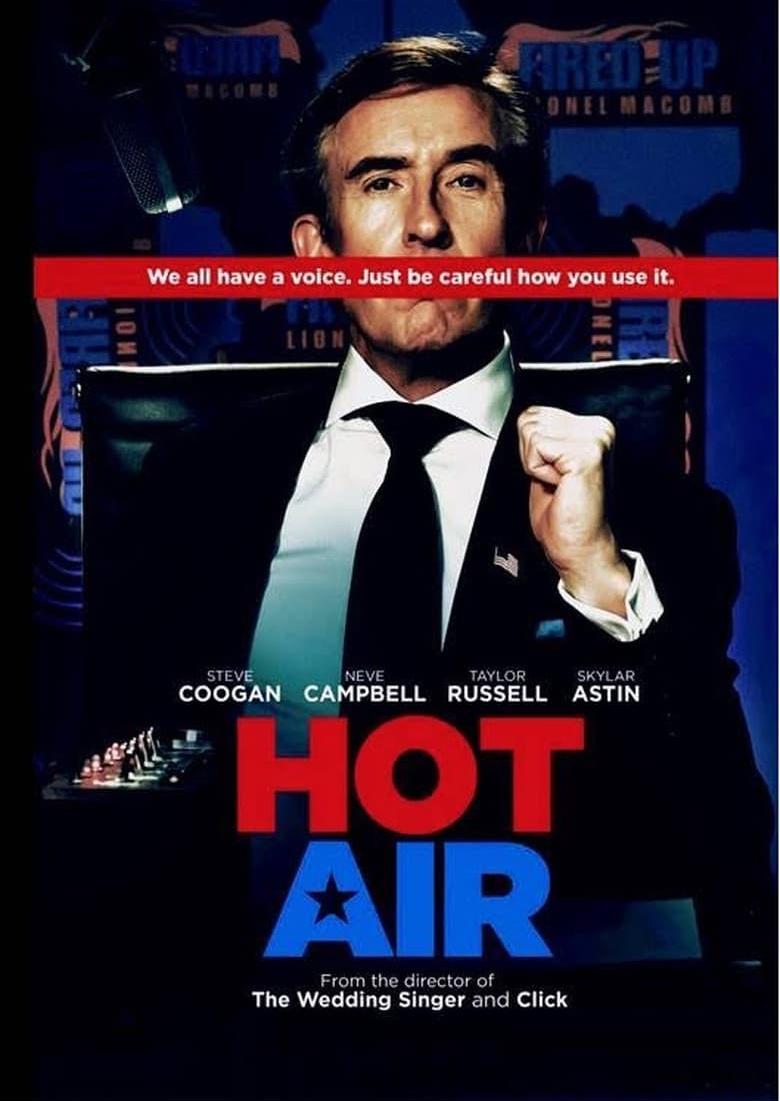 I enter Hot Air with a bit of trepidation, the pun of the title making me wary given its central character is a conservative radio talk-show host. I needn't have worried. Hot Air isn't bad because it takes easy shots at conservatives in general.

It's bad because it's disjointed, unfunny and quite dry.

Fired Up host Lionel Macomb (Steve Coogan) rules the airwaves, though there is a pretender to the throne. It's his former protege Gareth Whitley (Skylar Astin), who has found religion and does conservative radio with a vaguely Christian bent on his increasingly popular show, The Way.

Lionel is a misanthrope par excellence, so he's none too pleased to see Tess (Taylor Russell). Tess is his niece and despite having had no contact with her uncle she has nowhere else to go. Her mom Laurie (Tina Benko) is in rehab so for the time being, with some urging of Lionel's girlfriend Val (Neve Campbell) and to avoid scandal as his contract is renegotiated, Lionel shelters her until Laurie finishes her stay.

Lionel's Number One nemesis is New York Senator Judith Montefiore-Salters (Judith Light) and her 'Clean Slate' Act that would allow children brought illegally to go to college without fear of arrest complete with scholarships if memory serves correct. As he despises and detests "Hyphen" (his pet name for the Senator), it makes a budding romance between Tess and Montefiore-Salters' aide Grayson (Pico Alexander) a bit of a conundrum.

Lionel agrees to a live sit-down television interview with Gareth and is surprisingly enraged himself doubly ambushed. Not only has Gareth invited Hyphen to join them (something he did not agree to) but Gareth exposes Lionel's troubled past, information gleamed from Grayson. Eventually though Lionel still manages to survive this fiasco, while Laurie, somewhat sober, helps Tess get to an exclusive prep school and Tess finds her uncle's heart has melted ever-so-slightly.

Hot Air is not without possibilities and you can see at least one story clawing desperately to get out. Therein however lies at least one problem with Hot Air: it has a lot of stories and characters that come and go hither and yon.

For example, early on we see Gennady (Declan Michael Laird), this young Russian Eurotrash who takes Tess to a club. After Lionel dresses them both down we never see Gennady again, making all this rather pointless. Stabs at comedy with other characters such as Lionel's on-again/off-again assistant Tyler (Griffin Newman) similarly fall flat because he too seems almost an afterthought.

Again and again things, people and plot points are introduced only to be dropped or forgotten. Lionel has a mug from Dinosaur Gardens, which the film suggests is his only happy childhood memory. The film hints that this might be his 'Rosebud', that element that could crack the mystery. However, while it's mentioned it doesn't lead anywhere.

As far as I remember we never hear or see Tess share her family's painful past with Grayson. In fact, I think they share one coffee and take pictures with Polaroids.

As a side note, I kept wondering where she got Polaroid film, but I digress.

A bigger problem in Hot Air is how shockingly disjointed it is. Within a minute we go from Lionel and Tess being snippy at each other to them and Val happily going off to a weekend at the sea? What the hell? It doesn't make any sense because the tone shifts so wildly and so quickly the viewer almost gets whiplash. 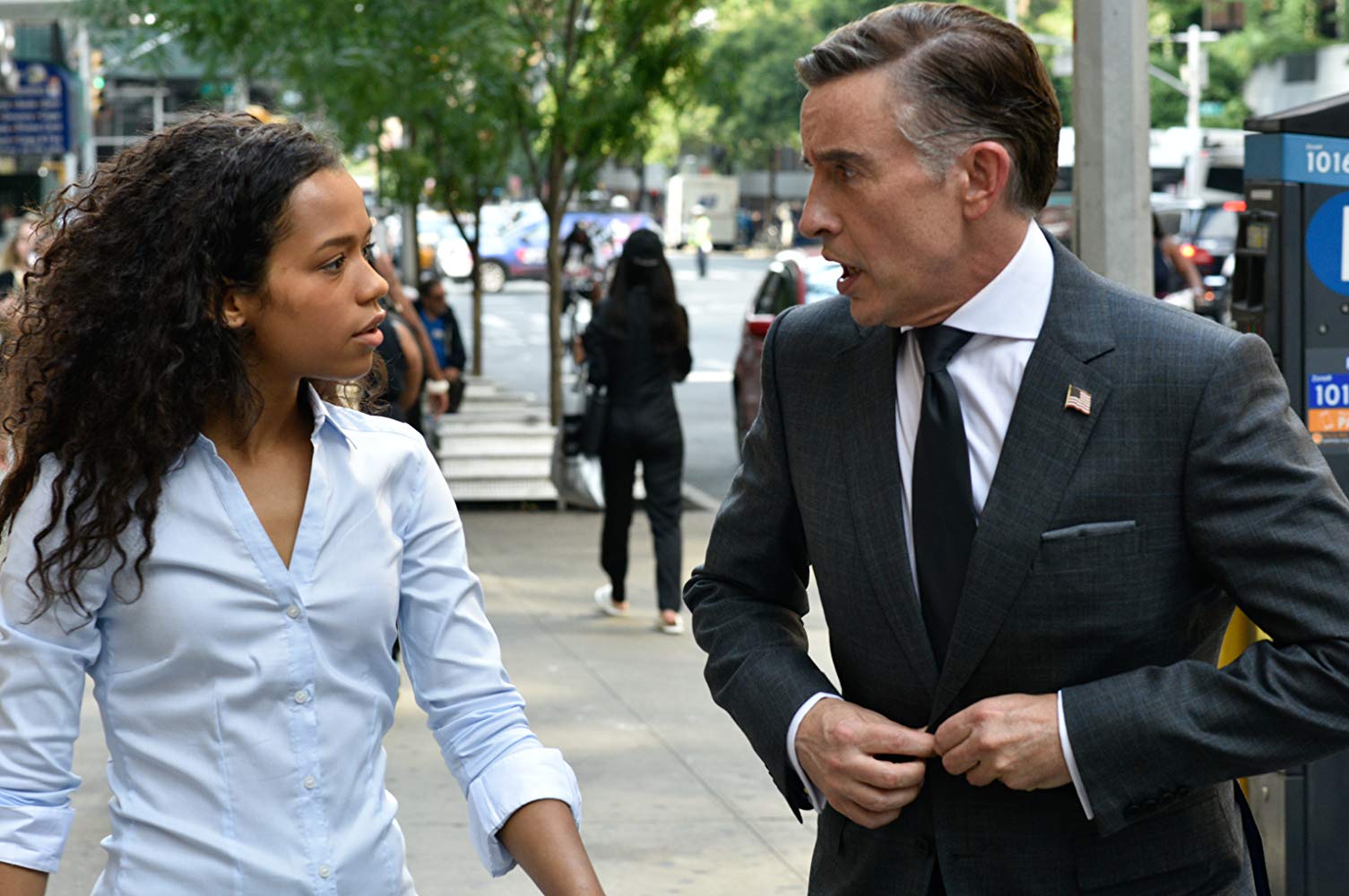 It's surprising that one can get a good cast and have them give pretty lousy performances. Coogan was shockingly stiff and dull as Lionel. He seemed too controlled to be a firebrand and too deliberately hostile to make what was meant as a softening look real. Even the most rabid progressive would side with Lionel when he is ambushed on Gareth's show.

Astin came across as creepy than sincere. I can only guess that Gareth Whitley was meant to be creepy and insincere, like a simultaneously sweeter and more uncouth version of Tucker Carlson. Alexander, like Coogan, played Grayson as if he were a character as opposed to a person.

However, among the jumble that is Hot Air, we do have some light. Russell had some genuinely good moments as Tess, limited only by the script. Her confrontation with Laurie was quite good. Hopefully Russell will find better and stronger material to showcase her budding talent. Campbell too is unrecognizable as Val, the public relations guru who actually loves Lionel despite all logic.

I would rather have wished to see a film with them as the main characters, with maybe Tyler as the wacky sidekick.

Again, it isn't as if there isn't a good idea rattling around Hot Air. There's even a real moment of wit. After being harassed out of a public park movie screening one of Lionel's harassers shouts, "How do you sleep at night?" Without missing a beat Lionel retorts, "On a mattress stuffed with cash and the broken dreams of Hillary Clinton".

Hot Air as it is now is sorely lacking: neither humorous or heartfelt. It's too dry, stiff, jumbled and filled with cliched characters and situations. It might have worked better with some tweaks: if for example Lionel were a liberal and Tess a conservative or if Lionel had vaguely human quirks such as a love of hockey or a passion for collecting bobbleheads. While Neve Campbell and Taylor Russell did good work (with Newman as an Honorable Mention), Hot Air is not funny no matter what your political leanings.