The Children's Hour: A Review 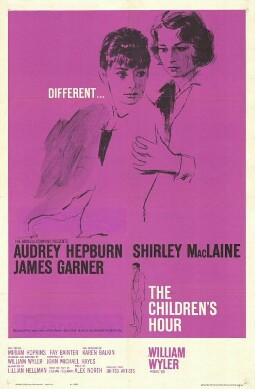 This review is part of the Summer Under the Stars Blogathon sponsored by Journeys in Classic Film and Musings of a Classic Film Addict. Today's star is Shirley MacLaine.

The Children's Hour is a remake of These Three, with the nature of the relationship between the two female characters more overt than in the original. Despite having the same director for both versions and a slew of competent actors, The Children's Hour seems a dry affair, stilted and almost too mannered to be real.

Martha Dobie (Shirley MacLaine) and Karen Wright (Audrey Hepburn) run a girls school, with Martha's wacky Aunt Lily (Miriam Hopkins) doing something there to. Karen is engaged to Dr. Joseph Cardin (James Garner) but she keeps putting off getting married until the Dobie-Wright School is in the black.

Things finally appear to be going that way when Dr. Cardin's young cousin Mary Tilford (Karen Balkin) continues making trouble for her teachers. In a pique of anger about being punished for lying yet again Mary runs away, but when her Grandmother Amelia (Fay Bainter) takes her back, Mary takes bits and pieces of information she saw and overheard to suggest that Martha and Karen are lovers.

Mrs. Tilford, horrified at the suggestion, quickly pulls Mary out of school, which causes a chain reaction of more students fleeing this den of iniquity. When Martha, Karen and Joe all learn the lurid rumors, they confront Mary but this blows up in their faces when Rosalie Wells (Veronica Cartwright) appears to corroborate that Martha and Karen have indulged in "sinful sexual knowledge of one another".

Their reputations and careers ruined, Martha finally admits to Karen her greatest fear/secret: that it's all true and she is in love with Karen. Karen won't countenance such things, but she has also driven Joe away. The fact that Rosalie has recanted after admitting she was being blackmailed by Mary does not help matters. Martha, now unable to go back into the closet, hangs herself in shame. Karen, devastated by all this, walks away from this town without pity with her head held high.

At least that is what it thinks, because for all the 'daring' it congratulates itself on The Children's Hour seems rather dry and dull with such a dynamite plot. When Karen tells Joe that the accusation is that "Martha and I have been lovers," Hepburn delivers that line with less emotion than as if she were describing her latest Givenchy gown. I would argue that Hepburn would have more emotion if she talked about her latest Givenchy gown than she does with the shocking suggestion that she's Martha's mistress.

We get teased a lot about the 'shocking' elements but a lot of the probably racier elements are very muffled to almost opaque. When one of the children's drivers tells Karen the story he heard, it's from a distance and so muffled you can't hear it. For a movie that prided itself about being bold, open and daring The Children's Hour is shockingly restrained.

A bigger problem is that director William Wyler, remaking his own These Three, had everyone and everything be rather mannered and stagey. At times it looked more like watching a filmed play than a feature film. Of particular note is when Grandmama learns the actual truth. The way the scene is staged not only seems excessively dramatic but almost choreographed to have all four of them (Mary, Mrs. Tilford, Rosalie and Rosalie's mother) pose. I admit I shouted, "KILL THE BITCH, GRANDMA!" as Mrs. Tilford walked slowly upstairs towards Mary, but so much of The Children's Hour could not shake the idea that it was a play. 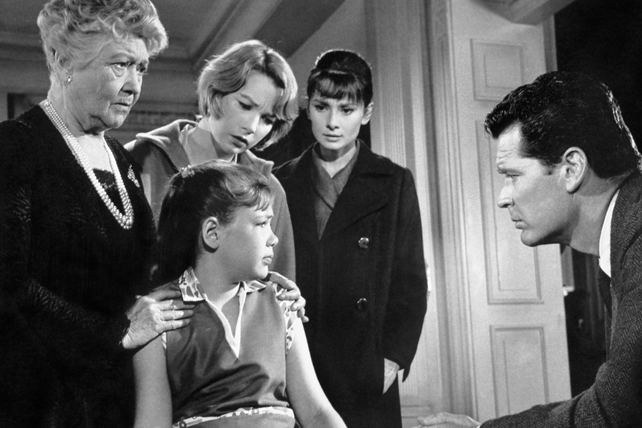 It is also surprising that despite having a generally good cast The Children's Hour seems very over-dramatic in the acting. Hepburn had some good moments, particularly when she is silently in the background, the rage crossing her face. However, she seemed a bit detached from things, as if her generally patrician manner could not accept that anyone would think she was anything other than asexual.

Bainter, in her final film role, and Hopkins, who starred in the original These Three as Martha, did quite well as the shocked grande dame and wacky yet self-serving aunt respectively. I was not taken by Balkin's Mary, coming across as more whiny brat than true monster. MacLaine seemed to slip into almost farce, particularly when she came out. She was so wildly dramatic that I wouldn't blame anyone for breaking out into fits of laughter at what should be a shocking self-admission.

I am not well-acquainted with James Garner's work but I found him so stiff and uptight as Joe. I just didn't like him and worse did not believe him as the jilted boyfriend. When he is supposed to be devastated at Karen's rejection his reaction is so awful I thought how did he ever get any acting jobs, let alone as something as 'groundbreaking' as The Children's Hour?

I think part of the problem was that Wyler seemed more interested in making a lush film than a real film. The story just didn't seem as shocking at it perhaps should have been. I think a bit part of the problem was Alex North's score, which was perhaps too romantic for some moments. Moreover, the transitions are very much like a play. We, for example, are first told there would be a libel suit against Mrs. Tilford, but when we go to the next scene the trial is long over and we find the ruling was for the defendant. Another time, we wonder whether Aunt Lily is still upstairs, or why if she was still there, she didn't call out to Karen to help find her niece Martha.

The Children's Hour is neither as groundbreaking as it thinks it is or as tame as it ended up being. It occupies a very odd place, particularly in lesbian/gay representation: attempting to be bold but still holding on to the 'tragic lesbian' cliche. A bit boring for its subject with some disengaged performances and rather stage-bound, The Children's Hour is long past its time.