That Hagen Girl: A Review 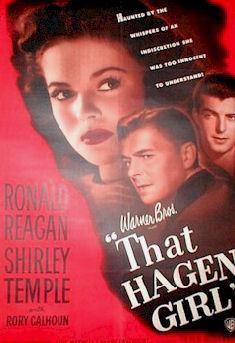 This review is part of the Summer Under the Stars Blogathon sponsored by Journeys in Classic Film. Today's star is Shirley Temple.

Shirley Temple, moving away from cute kid roles to more adult fare, is one of the few child stars to emerge from her early years unscathed. However, That Hagen Girl is one of her worst, or at least ill-thought, vehicles through little fault of her own.

Mary Hagen (Temple) has always been surrounded by gossip about her history ever since she was adopted by Jim and Minta Hagen (Charles Kemper and Dorothy Peterson). The chattering class in Jordan, Ohio are absolutely convinced that she is the illegitimate child of Grace Gateley, daughter of a wealthy family, and Tom Bates (Ronald Reagan). Everything surrounding Miss Gateley is hush-hush, locked away in a Boo Radley-style until her death. Tom, to avoid further notoriety, leaves this town without pity.

Many years later, he returns, and Mary soon suspects that perhaps Tom is her biological father. The cloud surrounding her origin along with the town's persistent hostility makes her a scarlet woman despite Mary having no personal scandal attached to her outside her birth. Ken Freneau (Rory Calhoun), scion of one of Jordan's wealthiest families, is in love with Mary and wants to marry her but faces pressure against it, his family preferring heiress Christine Delaney (Penny Edwards). Only Mary's BFF Sharon Bailey (Jean Porter) and sympathetic junior college teacher Julia Kane (Lois Maxwell) show Mary any support.

As people continue to gossip about Tom and Mary, talk become more salacious, reaching a shocking crescendo but ultimately things end on what we're told is a romantic note as Tom and Mary leave Jordan together.

Jordan, Ohio makes Peyton Place look like Mayberry, a cauldron of sex and scandal where everyone has only one topic of discussion: that Hagen girl. In a certain way, it's amazing That Hagen Girl could even have been made given the not-so-subtle winks about premarital sex and illegitimacy. You can see the film perpetually hint at this rather risque scenario, all but shouting "MARY IS A BASTARD!". Sometimes though the end results to all this winking ends up as hilarious, such as Mary's mother dying just as she is about to tell Mary something about her past.

In fact, I would say That Hagen Girl probably pushed the Hays Code pretty far. Not only do we have almost open suggestions of sex and out-of-wedlock children but teens getting pretty frisky, either when Ken takes Christine to a bar or when local rake Dewey Koons (Conrad Janis) keeps hitting on every girl he sees.

What is extraordinary about That Hagen Girl is not the pretty open suggestion of illegitimacy and teens gone wild. It's the bizarre suggestion of incest that runs through the film. It's extraordinary that no one involved in the production side, neither Charles Hoffman's adaptation of Edith Roberts' novel or director Peter Godfrey realized that That Hagen Girl was suggesting that Tom Bates lusted after a teen girl who could literally be his own daughter!

That is probably the more scandalous aspect of That Hagen Girl, that while Tom knows Mary isn't his daughter thanks to information we are told at the end of the film, the directing both of the actors and the screenplay push the audience to think it is a strong possibility. We should know that Tom isn't Mary's father, but the film leads us in that direction to a point where in retrospect it makes things grotesque. 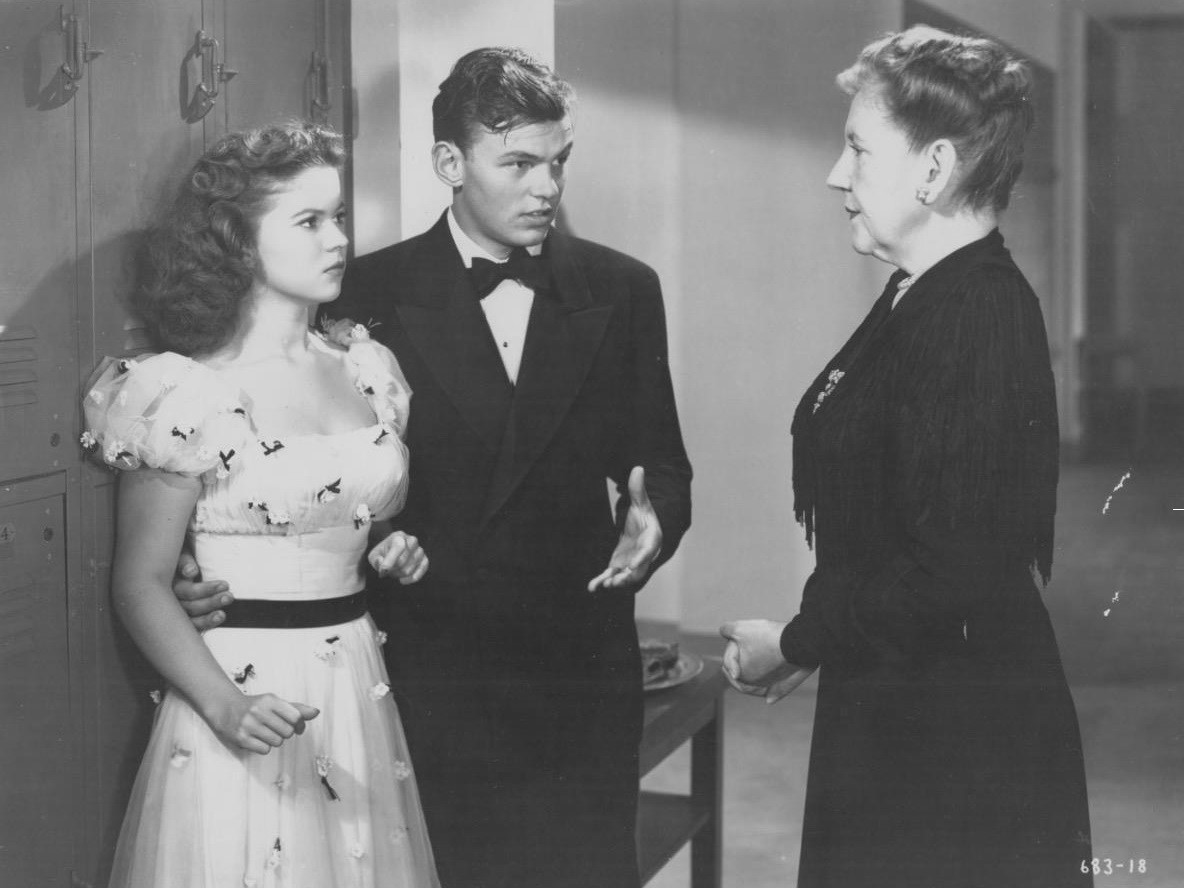 Even removing any actual suggestions of incest, the entire idea that Mary would be in love with, let alone run off with this much older man is absolutely bonkers. It makes no sense on any level and is almost insulting to the audience.

To be fair, I think the people making That Hagen Girl were trying to say something about prejudice and narrow-minded hypocrites, but whatever positive notions they intended were drowned by a host of other bad decisions ranging from the actual story to some bad performances.

Bless Ronald Reagan, who despite the idiocy of the overall story managed to look halfway decent as the upright Bates. He gives it his all and does his best to keep his dignity among all the goings-on. Temple too tried, though she seemed very uncomfortable and stiff. Only when she plays the lead in a production of Romeo & Juliet does she seem to relax a little and not be as over-dramatic as she is for the rest of the film. Granted, it's hard to sound rational when given such lines as "There isn't any 'someday' for you and me, Ken," but it looks like Temple would have preferred to have drowned in her suicide attempt.

Maxwell, who would become known as Miss Moneypenny in the James Bond series, was one of the few bright spots, acting as if she were in a serious drama versus a lurid and crazy story. Janis too was surprisingly strong as Dewey, forever causing mischief. Calhoun was a bit lost as the wealthy Ken but he wasn't horrid. Porter's Sharon made me think she could have been a good junior Eve Arden, rattling off quips as the 'wacky' best friend.

That Hagen Girl is almost comic in how it tries to be so dramatic and salacious without being direct. There's a genuine effort to send a message of tolerance and true morality in it which makes it barely watchable. Perhaps not good but oddly fascinating.

There is a fine line between tawdry and insipid. That Hagen Girl keeps wandering back and forth between said line. There may something about Mary, but there isn't much about That Hagen Girl.