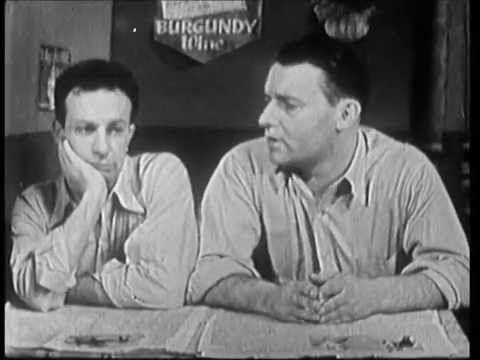 This review is part of the Summer Under the Stars Blogathon sponsored by Journeys in Classic Film and Musings of a Classic Film Addict. Today's star is Rod Steiger.

Perhaps I am spoiled by the fact that I saw the film version of Marty before the original teleplay. That may be why I found the original version weaker, almost boring. The story is still good, and some slack should be given considering it runs less than an hour. However, I think the main reason the teleplay of Marty is weak is due to Marty himself.

36-year-old butcher Marty Piletti (Rod Steiger) is the only one of his brothers and sisters to still be single. His status is distressing to his Italian mama Theresa (Esther Minciotti) who also has to deal with her cantankerous sister Caterina (Augusta Ciolli). Caterina is hounding her new daughter-in-law and Theresa's nephew and wife ask Theresa to let Caterina live with her and Marty.

Theresa pushes Marty to go to the Waverly Ballroom which is loaded with 'tomatoes', and despite himself he goes. He's rejected by a pretty girl and then is approached by another man who offers Marty five bucks to walk a date whom he found unattractive home. Marty balks at the offer but after seeing 'the girl' (Nancy Marchand) humiliated, he approaches her and they end up dancing together, enjoying their company.

It looks like Marty might have finally found someone, but Theresa soon starts worrying that this girl will push her out of the house the same way Caterina was pushed out, and she's not Italian to boot. Marty's best friend Angie (Joe Mantell) too thinks 'the girl' is a dog and pushes Marty not to go out with her again. Faced with these pressures, Marty starts to buckle but ultimate bucks the trend, telling Angie that he doesn't care what he, his mother or anyone else thinks: he, Marty, likes her, that they had a good time together and this may be the girl for him. 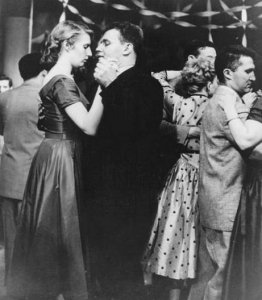 Again, it is difficult to look at this original production of Marty and not think on the film, but I think that Marty has as its major weakness Rod Steiger, who declined to recreate his role for the film version. Steiger was ACTING with a Capital A in Marty, and I found his performance as this lonely Bronx butcher very, almost irrationally controlled.

For example, when he calls up a girl out for a date rather than seem desperate and/or lonely he seems curiously distant. The same goes when he tells his Mama about how he's this 'fat, ugly man', reciting the lines but not convincing me that he does think of himself as this 'fat, ugly man'. Steiger acts as if getting the words right is more important than getting the feeling behind the words right. I got the sense he didn't believe he could be a 'fat, ugly man', that he really thought he was trying to be a schlub and not fooling anyone.

Interestingly, Paddy Chayefsky's script gives Marty a curious turn of phrase when he tells Angie that he's "36 years of age". Far be it to suggest lonely Bronx butchers cannot sound eloquent, but I would have thought Marty would say he was "36 years old" versus "36 years of age". Yet I digress.

I found Steiger was surprisingly weak, more involved in giving a performance than in being Marty. His 'rage and hurt' about the 'blue suit, grey suit' seemed like a performance meant to be seen and heard in the rafters.

Marchand was better as "the girl" (though in the end Marty uses the name 'Clara'). She was appropriately awkward and insecure as this lonely girl who like Marty just wanted love. Martell and Mincotti (who would, unlike Steiger and Marchand recreate their roles for the film) were on the whole good. I would argue Martell had a smaller role as the equally lonely friend who echoed Marty's misery, while Mincotti seemed maybe a bit too much as the Italian mama.

Delbert Mann, who would go on to direct the film adaptation, does quite well in moving things along and drawing good performances out of his cast. I don't hold him responsible for Steiger though, as Steiger seemed determined to do things his own way.

There are some things that should be remembered when it comes to Marty. It has a short running time and as such cannot go into great detail about characters. The subplot about Caterina does not feel like a hindrance but it is there to place Theresa's fears about the future when the boy she wants married finally does. It's a bit rushed but one can see the elements to a much richer story about lonely, plain people who find that they aren't the dogs they think they are.