The Adventures of Errol Flynn: The Television Documentary

THE ADVENTURES OF ERROL FLYNN

This review is part of the Summer Under the Stars Blogathon sponsored by Journeys in Classic Film and Musings of a Classic Film Addict. Today's star is Errol Flynn.

Errol Flynn: scandalous, swashbuckling and genuine actor. The original Tasmanian devil, Flynn was both a daredevil with a devil-may-care attitude and an intellectually curious man. He loved women but was also a devoted father to his children. The Adventures of Errol Flynn covers his life story, one that reveals a man who thought life was an awfully big adventure, but who also was deeply trapped by that which brought him what he wanted.

Narrated by Ian Holm, The Adventures of Errol Flynn covers his life from his birth and upbringing in Tasmania, Australia through his various exploits on his way to becoming an actor first in Great Britain and later in Hollywood. Once there, with a little help from his first wife, actress Lili Damita, he was cast in the title role in Captain Blood, a newcomer who was given the role after Robert Donat, Leslie Howard and Fredric March turned it down.

Astonishing how no one could imagine anyone other than Flynn in the role, he nearly didn't get it but Mr. Chips did.

His turn as this daring swashbuckler made him an overnight success, the public response to his athleticism and incredible beauty surprising everyone. He quickly was put in a series of action costume pictures, usually with Olivia de Havilland with The Adventures of Robin Hood as their definitive piece. His studio Warner Brothers had found a formula that worked, and while he was allowed to occasionally venture into other genres like comedies, the public on the whole preferred Flynn in essentially two types of films: costume swashbucklers and Westerns. 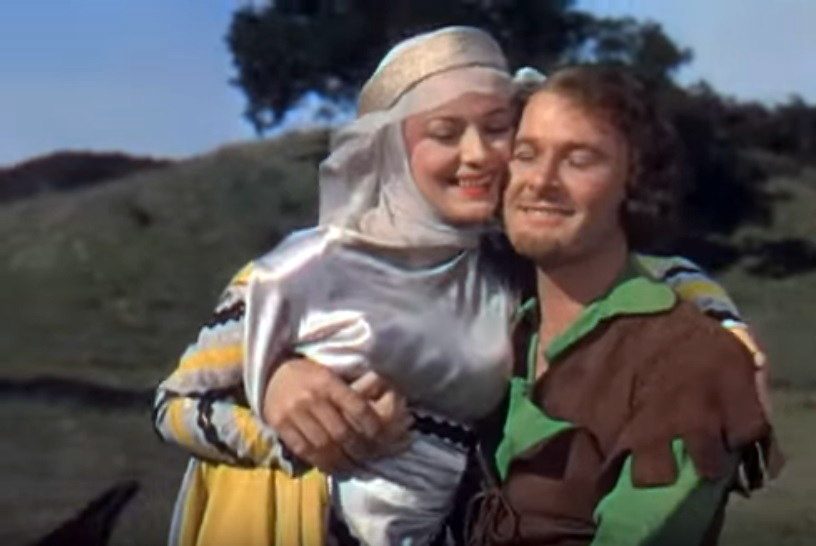 As Flynn observed in the audio track, "Give him a horse, give him a sword, do something, Errol".

However, Flynn did want to get away from the trappings of his screen persona but instead found said persona spilled into his private life. A sensational statutory rape trial and failures in his marriages plagued him, as did a morphine addiction he began in his quest to try anything.

Financial problems too started in on him, culminating in an unfinished film, The Story of William Tell, which all but bankrupted him and even brought a lawsuit from his then-friend, actor Bruce Cabot, whom Flynn had hired for William Tell to help Cabot out to begin with.

Flynn's last cinematic hurrah was in Too Much, Too Soon, a biopic of John Barrymore that played more like a biopic of Flynn than of The Great Profile. The Shakespeare soliloquy he recited as part of the film caused the crew to give him a standing ovation, and he was even presented a recording of it as a gift from them. That kind of belated adulation for his acting versus his 'wicked, wicked ways' quietly moved him, but he died in 1959 aged 50, a life of excess finally catching up to him.

The Adventures of Errol Flynn is a good primer to this most fascinating yet slowly fading figure. While the expression 'in like Flynn' still is used, Flynn's on-screen persona as a swashbuckler seems more ripe for parody than for genuine respect. Despite that Robin Hood: Men in Tights is supposed to be a spoof of Robin Hood: Prince of Thieves, it's clear that Flynn's lusty, laughing characterization is also held up for mockery. Flynn's performance was also essentially ridiculed in the Doctor Who episode Robot of Sherwood, and The Rocketeer went one step further. 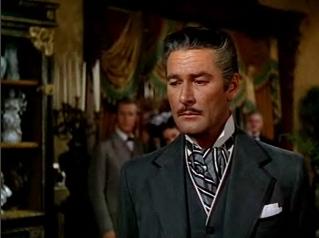 In that film, "Neville Sinclair" was meant to be an Errol Flynn-type, and also uses Flynn's alleged Nazi connections as a plot point. The Adventures of Errol Flynn touches on the allegations, making clear that there is no solid evidence Flynn was a Nazi collaborator or even sympathizer. The interviewees ranging from his longtime costar de Havilland to his surviving children and film historians like Rudy Behlmer make clear that Flynn was in reality quite free of prejudice, disinterested if a man was Jewish or black or anything.

We do learn some fascinating information about Flynn the man as opposed to Flynn the persona. While lacking in much formal education he not only read but wrote two novels and became an art collector of taste. He had a passion for adventure and sailing but he also deeply yearned to stretch as an actor beyond 'cowboy hats and tights'. He turned down a chance to play the sympathetic role in That Forsyte Woman so as to play the more villainous role and earned high praise for his sympathetic alcoholic in The Sun Also Rises.

One can see Flynn, despite his protests to the contrary, did want to be seen as a genuine actor. It is tragic that he was belatedly recognized for his skills, including by his The Private Lives of Elizabeth and Essex costar Bette Davis. As told by their mutual friend de Havilland, Davis despised Flynn as a talentless charmer to her genuine actress, but after having a private screening of Elizabeth and Essex Davis had a change of heart, admitting he was an actor.

De Havilland was also amusing in her own elegant and discreet manner when talking about how she declined an off-screen romance due to the uncertain situation with Damita. She got back at Flynn by deliberately blowing a kissing scene in Robin Hood, then says that Errol had 'a little trouble with his tights', a most demure way of saying his erection was fully visible.

Flynn not only had a way with women but was able to laugh at his own screen image: the documentary begins with his appearance on the television game show What's My Line?, where three people claim to be one person and the audience has to figure out who the 'real' person is. It's easy to see which of the three (including Don Knotts) is 'the real Errol Flynn', but his side-look when the mention of being married three times is amusing.

Not so amusing was the damage to his reputation over the statutory rape charge, which the documentary suggests were politically motivated as revenge against Flynn's studio. Though he tried to cover his pain and anger by joining in the jokes, the idea that he violated women bothered him to no end.

Errol Flynn was a rake, a rogue, and a much better and more skilled actor than his detractors then and now admit. He lived large, sometimes to his own detriment, but if anything The Adventures of Errol Flynn gives one insight into a person who never shrunk from life.